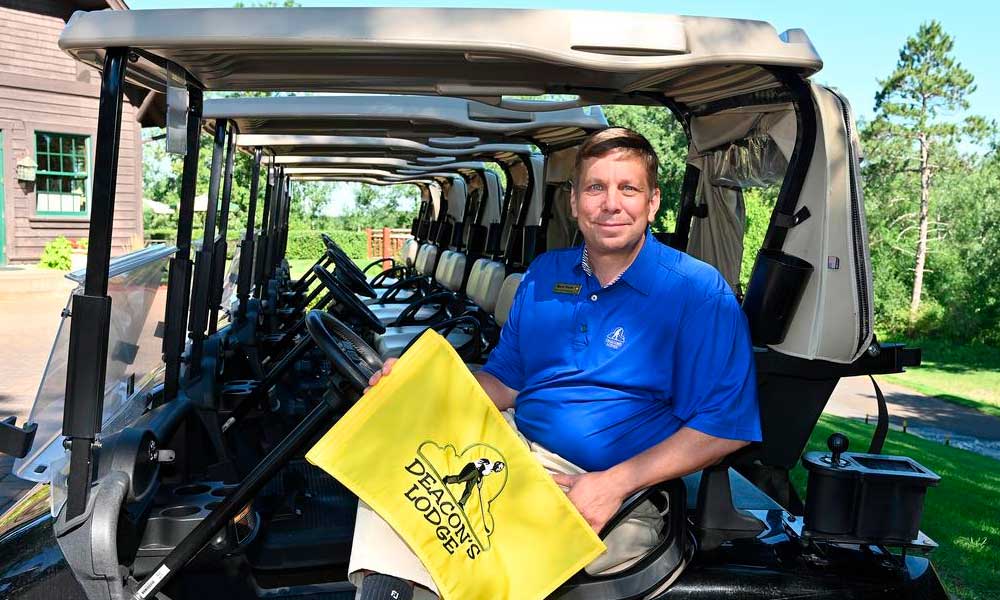 Mark Neva was in the right place at the right time.

Deacon’s Lodge finished construction in 1999 and Grand View Lodge was hired to operate and maintain the course.

“I raised my hand and I said ‘I’ll go out there, I mean Arnold Palmer? Are you kidding me?’”, Neva said when approached with the opportunity. “It was just being in the right place at the right time and none of it was by design.”

Breezy Point Resort then bought the course in 2012 and Neva left Grand View Lodge to remain the head professional at the course designed by Palmer.

Neva grew up in Golden Valley, a western suburb of Minneapolis, and fell in love with golf by not playing a golf course, but at a public park.

When he wasn’t at the park he was at Brookview Golf Course where he played most of his junior golf. Neva worked at Brookview during his college summers at the University of Minnesota-Duluth.

After graduating from UMD, Neva did a four-year PGA apprenticeship at Wayzata Country Club. Then, he saw an opportunity to move to the Brainerd lakes area.

“There was this new course called The Pines and I was hired by a former pro at The Pines Kevin Cashman in 1994,” Neva said. “That was the year we opened the Marsh 9 and opened the clubhouse as well. So I moved up to Brainerd right at the beginning of the (golf) boom up here.”

Neva was the assistant to Cashman for one year before becoming the head professional at The Pines in 1995 when he was 27-years-old.

Even though Neva grew up in the cities, he loved the north country. It’s one of the reasons he attended UMD and took a chance moving to the Brainerd lakes area.

“It was blind luck,” Neva said. “But you take the chance and it worked out.”

After becoming the head professional at Deacon’s Lodge, he remembers a conservation with a friend about the move being a great resume builder.

“That’s true it spices up the old resume, but I have no intentions of sending it out anywhere,” Neva said. “I kind of felt like I had landed. I just landed a little earlier than others.”

The first time Neva saw Deacon’s Lodge was in the winter. Even with a few inches of snow on the ground he could tell the course was going to be a beauty.

“It was dramatically impressive right from the start and right from my first viewing,” Neva said. “You could see its potential.”

Palmer played the back nine with former Minnesota governor Jesse Ventura to be the first to play Deacon’s Lodge.

“It was a cool day,” Neva said. “It was overcast, misty. Palmer had a jacket on. He flew in from Orlando that morning and we picked him up in a van in Brainerd and by the time we got him on property he had a hard time loosening up. It was scheduled to be an 18-hole round but because of weather they just decided to play the back nine.”

Deacon’s Lodge is named after Palmer’s father who went by the nickname Deacon.

“We were blessed to name the course after his father,” Neva said. “It has a ring to it and it doesn’t scream golf, but there is a mystique to it that is fitting to the golf course.”

Having Palmer play the golf course remains an all-time memory for Neva.

“How do you top Arnold Palmer playing the golf course? That was a very special moment,” Neva said.

Neva tries to let the golf course speak for itself. Deacon’s Lodge was listed the third best golf course in the state of Minnesota in Golfweek and Neva thinks the course stands on its own.

“It shines on it’s own and we are just here to give it its pathway,” Neva said. “The value and experience is there for the taking. We are in the memory making business.”

Neva credits his staff for making Deacon’s Lodge a great place to work and play golf. Upstairs in the clubhouse he has a list of every employee that has worked in the pro shop, on the course and in management. Every name from those who started last summer, to those who started with Neva 21 years ago are listed. It’s a reminder for him to appreciate his staff.

“We have had great staff and great teams who have all taken ownership of their positions,” Neva said. “And for a lot of us the golf course becomes our identity. Not only professionally but personally.”

Ed Thomas is the superintendent at Deacon’s Lodge and is one of the people that has been with Neva since the beginning.

“He’s the unsung hero behind all of this,” Neva said. “We are like minded and we both appreciate the positions that we hold and don’t take them for granted.”

Neva doesn’t play golf much anymore. Instead he hears stories from his staff and his children about their rounds. His oldest son Henry, graduated from Pequot Lakes high school in 2020 and made the state golf tournament in 2019.

“I play less and less every year,” Neva said. “I don’t begrudge that and I am at peace where I am at in my career and where I am personally. Just because I don’t play like I used to doesn’t mean I don’t love the game any less.”

“I am here for the foreseeable future,” Neva said. “I have no desire to go anywhere else and it just checks so many boxes for me. That’s what keeps me motivated.”