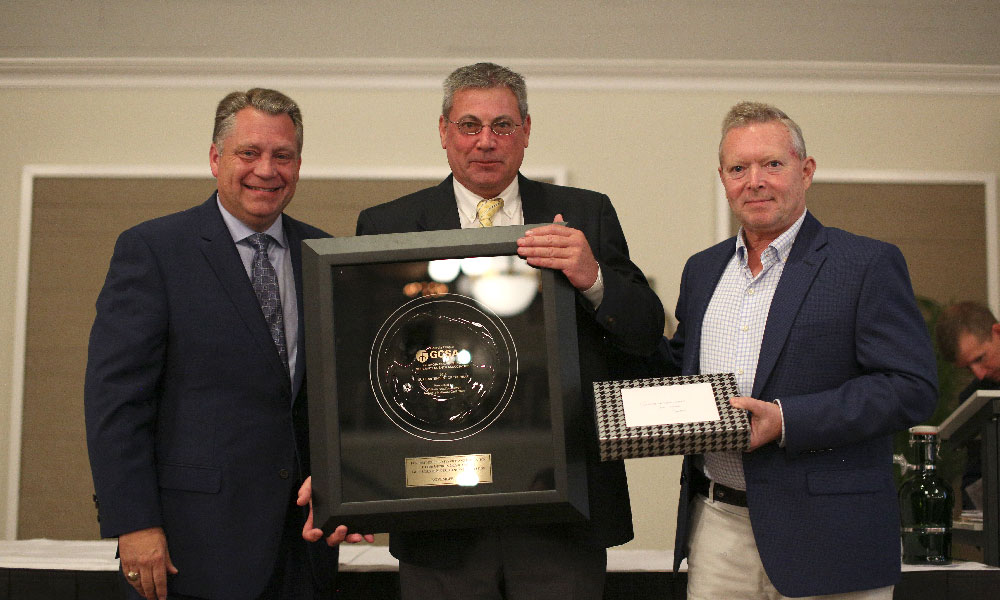 Behind the scenes of Tiger Woods’ fifth Master’s win this year, another man also achieved a remarkable high. Brad Owen, golf course superintendent at Augusta National Golf Club, produced playing conditions at least one good judge described as the “best I’ve ever seen.” That observer was no less than Marsh Benson, who prepared the golf course for 26 Masters Tournaments during his own tenure as superintendent at Augusta National.

“Starting with the Augusta National Women’s Amateur, the Drive, Chip, and Putt competition, culminating in Tiger Woods’ historic fifth Masters title,” Benson said, “This year’s Masters preparations and conditioning were the best I have ever seen.” Not surprisingly then, the Georgia Golf Course Superintendents Association recently named Owen their Superintendent of the Year.

Owen received his award to a standing ovation from nearly 200 people during the association’s annual awards banquet at Jekyll Island Resort early November. The award is presented in partnership with Corbin Turf and Ornamental Supply.

Owen started in golf course maintenance in the mountains of western North Carolina and moved to Augusta National 39 years ago, working under Paul Latshaw, CGCS and then Billy Fuller. When Benson arrived in 1989, he said he “inherited” Owen “pretrained” as a third assistant.

“I had the pleasure of working and sharing experiences with Brad through those many years,” he said. “Maybe one of my biggest challenges was just making sure I didn’t screw him up! Brad’s agronomic knowledge and experience, as well as his professionalism and leadership, have always been of the highest standards.”

Earlier on the night, the Georgia GCSA presented the Distinguished Service Award to immediate past-president, Greg Burleson, CGCS. Burleson was the longtime superintendent, on the other side of a chain-link fence from Owen, at Augusta Country Club. He is now at Wade Hampton Golf Club in Cashiers, NC.

Frank Siple, CGCS was inducted into the association’s Hall of Fame. Siple retired in 2018 after a nearly 50-year career as a golf course superintendent and later as a sales representative for Corbin Turf and Ornamental Supply. Georgia GCSA Hall of Fame inductions is made in partnership with the Jerry Pate Company.

Rhett Baker from Ohoopee Match Club in Cobbtown won his second Georgia GCSA golf championship, presented in partnership with Greenville Turf and Tractor. Baker’s win was one half of a double for Ohoopee Match Club. The club’s assistant superintendent Jonathan Suma won the championship’s open division.

Tim Busek from The Manor Golf and Country Club in Milton was elected president at the association’s annual meeting. The new vice-president is Chris Steigelman, CGCS from The Landings Club in Savannah and secretary-treasurer is Nelson Caron from The Ford Plantation in Richmond Hill.

Others recognized on the night and during the three-day end-of-year event included: