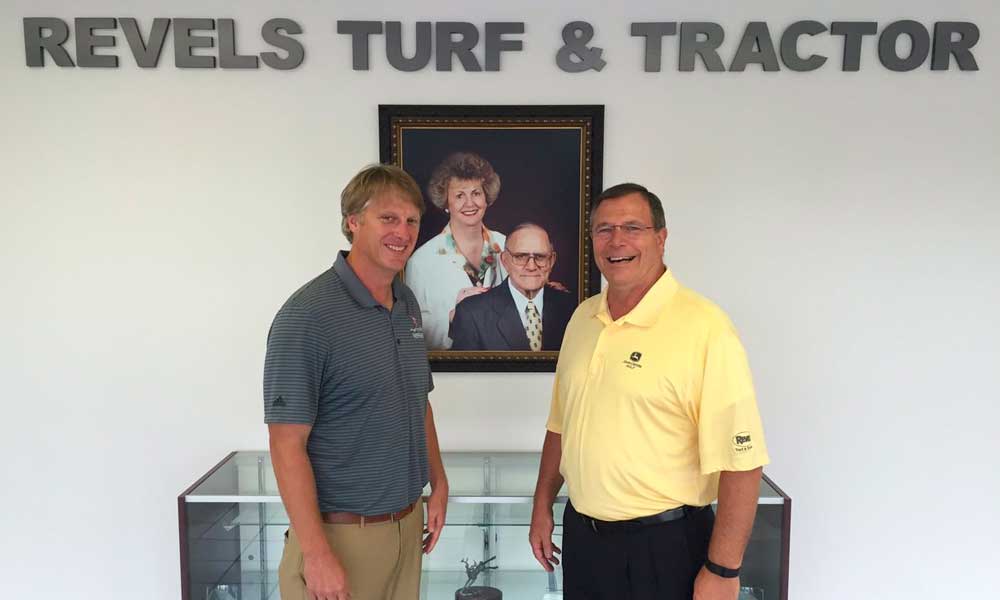 Turner Revels, a key figure at the root of John Deere’s rise to becoming a powerhouse in the golf industry, will receive the Distinguished Service Award from the 1,800-member Carolinas Golf Course Superintendents Association next week. Revels is president of Revels Turf and Tractor, a John Deere distributorship based in Fuquay-Varina, N.C. The business started by Revels’ father in 1961 was one of the first signed by John Deere when it moved into golf in 1986. 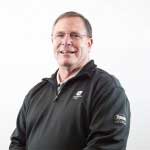 In 1991, John Deere headquartered its commercial lawn and landscape operations in nearby Raleigh and in 1997 built its Turf Care manufacturing facility in Fuquay-Varina. “I like to think that myself, Revels Turf and Tractor and John Deere Golf all grew together,” Revels says. He will be recognized with a special presentation on Nov. 16, the last day of the Carolinas GCSA’s annual Conference and Trade Show in Myrtle Beach, S.C.

“He (Revels) has a heart as big as he is,” says Fred Meda, who has known Revels since buying a Brouwer Triplex mower from him in the mid-‘80s. “He is an honorable, trustworthy man. You shake his hand and you have a contract.”

Meda, now retired, is also a major figure in the business in the Carolinas. A past-president of the association and a Distinguished Service Award winner, he was such a presence with the Myrtle Beach National Company from the ‘70s into the early 2000s that he was known as The Godfather. He says “we wouldn’t be where we are” without Revels and others like him.

“The industry people have done so much for our association and Turner is one of the best of them,” Meda says. “He has always done great things for us. And what he does for one, he’d do for anybody. He’s just a good guy.”

The Carolinas GCSA is now the largest affiliated chapter of the Golf Course Superintendents Association and the three-day Conference and Show is the largest regional event for superintendents in the country. Revels, fellow distributor Lon Fleming at Greenville Turf and Tractor and John Deere have played integral roles underpinning that growth.

“It’s been a real pleasure seeing that happen,” Revels says. “It’s something everybody has achieved together. It’s a really special thing for this industry because I’ve seen what’s happened in other parts of the country and my fellow John Deere Golf distributors, throughout the country, very few of them have anything like what we have here in the Carolinas. It just doesn’t exist.”

Revels gives credit to many for that outcome, even his competitors. “Of course there’s competition but there’s competition in all aspects of business,” he says. “But I don’t view competitors as the enemy so-to-speak. I played baseball as long as I could, you know, until I was 32 and I had a lot of great friends that I played baseball against. I take that same attitude in this field. There are a lot of good people in the equipment business that are competitors. I respect what they do. I think all of us help make each other better.”

Current Carolinas GCSA executive director Tim Kreger describes Revels as the “ultimate team player.” “We are very fortunate to have a number of industry partners in the Carolinas who are committed to the success of the industry, not just the individual success of their company,” Kreger says. “Turner is in the vanguard of that group. He is a leader and is tireless in his efforts on behalf of golf course maintenance professionals in this part of the country and thoroughly deserving of this honor.”

Tireless indeed. Revels sat his final exam at Elon College in May of 1974 then started work at the family business the very next day. Later that decade, the agricultural industry slipped into a significant decline, taking tobacco along with it. As that slump stretched into the ‘80s, Revels explored alternative avenues for the company.

He made his first sale to a golf course superintendent in 1982. “I took one of the guys working with us and hired another and we started calling on golf courses long before John Deere ever thought about getting into the golf industry,” he says. Four years later, John Deere “came to us and said we’d like you to be our golf distributor,” he says. “We jumped at that opportunity. We’ve been a very vital and consistent part of that ever since.”

Revels credits his father Charles T. Revels and mother Annie Laurel Revels with instilling a work ethic and regard for people that set him up for success. “I was blessed to grow up in a Christian home where family values meant something,” he says. “And my dad carried that on to the family business. His message was to ‘always do the right thing and always do things the right way.’ My dad was not educated in a college sense but he was a very educated man in terms of experience. With my dad it was work or baseball or football or basketball. We were a family that worked and the play was organized play. It wasn’t goofing off. And it certainly wasn’t lying round watching TV.”

Revels is also grateful for the support of staff members at Revels Turf and Tractor such as Larry Adcock, Rankin Armstrong, Russell Montgomery and Neal Duff. “They’ve been with me a long time, those guys,” he says. “And they’ve been just as committed as I’ve been. That’s what it takes for a company like ours to succeed. It takes everyone pulling together.”

He reserves an extra special recognition for his wife of 40 years, Diane, who serves as office manager at the Fuquay-Varina headquarters. “She’s put up with a lot and put up me with me being away an awful lot of nights over the years,” he says.