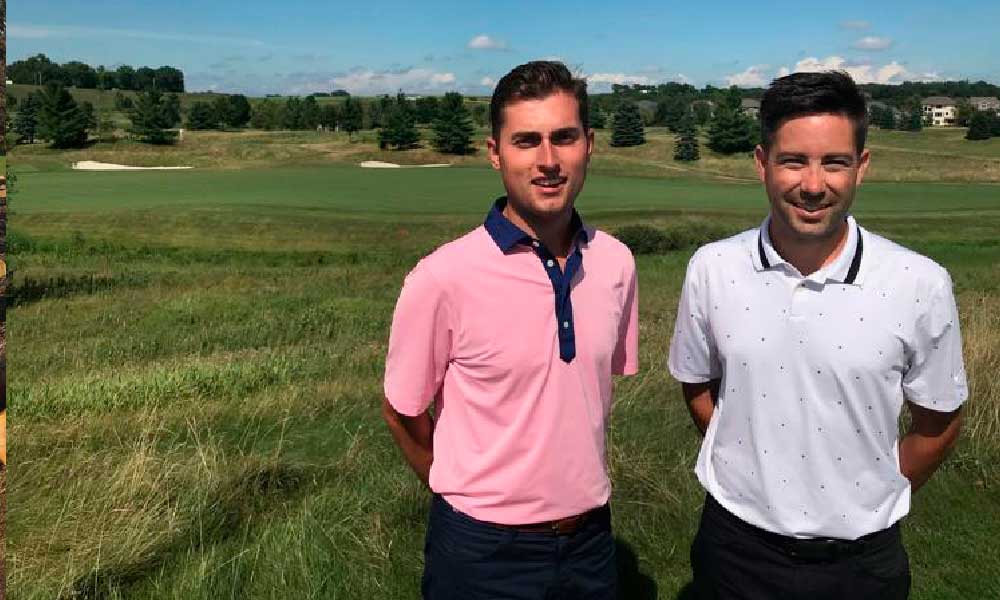 Starting with his days as a caddy growing up in Burnsville, Minn., Adam Chandler was always excited to get to the golf course.

He didn’t just love being on the course and playing competitively, he loved everything about it — the beautiful setting, the people he was around, the multifaceted operation.

So, when it came time to plan his career, he chose the golf enterprise management program at University of Wisconsin-Stout. A little more than a decade after graduating in 2009, he’s glad he did. As head PGA professional at Somerby Golf Club in Byron, Minn., he still can’t wait to get to the course each morning.

“Our No. 1 goal is to make the member and guest experience the best it can be. We get to help people enjoy the day,” Chandler said recently inside the Somerby pro shop, which overlooks the fairways and rolling terrain of the scenic 18-hole private course.

Chandler has taken a slightly different route to success in the golf industry. Most GEM graduates steer toward the business side of course operations. As a standout Blue Devil golf team member, he wanted to continue on the playing side. After graduating, he became a certified PGA professional through the Professional Golfers’ Association of America.

He worked as an assistant pro at several courses, including at the high-profile Hazeltine National in Chaska, Minn., before landing his first head professional job in 2016 at Somerby, eight miles west of Rochester, Minn.

“It was a goal of mine to be a head pro. It’s a lot different being a manager. You get pulled in a lot of different directions,” he said, citing responsibilities for his staff, pro shop merchandise and operations, lessons, coordinating tournaments, long-range planning and more.

Somerby, recently ranked by Golf Digest as one of the 20 best courses in the state, stresses inclusivity and community-building as part of its mission. The club partners with Mayo Clinic Sports Medicine program to help adult and junior golfers perform better; Chandler teaches high school players at the clinics.

Family and social activities also are a big part of Somerby’s mission. The club, established in 2004, has its own beehives and harvests honey for use in its restaurant, and it’s a certified Audubon course. Somerby was co-designed by former British Open champion Tom Lehman and previously hosted a Nationwide PGA Tour professional tournament.

“You’re seeing clubs expand into more than golf. We’re trying to get members to see this as their lake home almost,” said Chandler, who also played on the UW-Stout men’s basketball team for two years.

Chandler appreciates the education he received through the GEM program. “Graduates are very knowledgeable and prepared. The instructors have done a heck of a job getting the program to where it is,” he said.

With a wife and three children and long hours in the summertime, he ekes out time to play and practice but still competes in state-level tournaments and loves what he does for a living.

“I love everything about golf. It has afforded me a lot of opportunities,” Chandler said.

Another alum at Somerby

An assistant pro under Chandler is another UW-Stout graduate, Nate Musta, in his second year at Somerby.

Musta graduated in 2016 but not from the GEM program. He was a game design and development major who happened to be an excellent golfer and all-around athlete at Rochester Century High School.

After graduating he had a chance to work full time at a Rochester course where he worked part-time in high school. With most game design job opportunities on the West Coast and his fiancée, 2015 UW-Stout apparel design graduate Paige Murray, working at Target Corp. in Minneapolis, he chose Minnesota and the golf industry.

“I wouldn’t change anything. I’m happy with how it’s all turned out, and I credit Stout with a lot of that,” Musta said, noting that many of the leadership, personal and computer skills he learned in college have been valuable in his job.

Like Chandler, Musta is continuing his education to become a PGA-certified pro, hoping to work as a head pro someday as well.

“I love the interaction with people all day long and the aspect of not having a desk or a nine to five job. I never thought I’d love it this much,” he said.