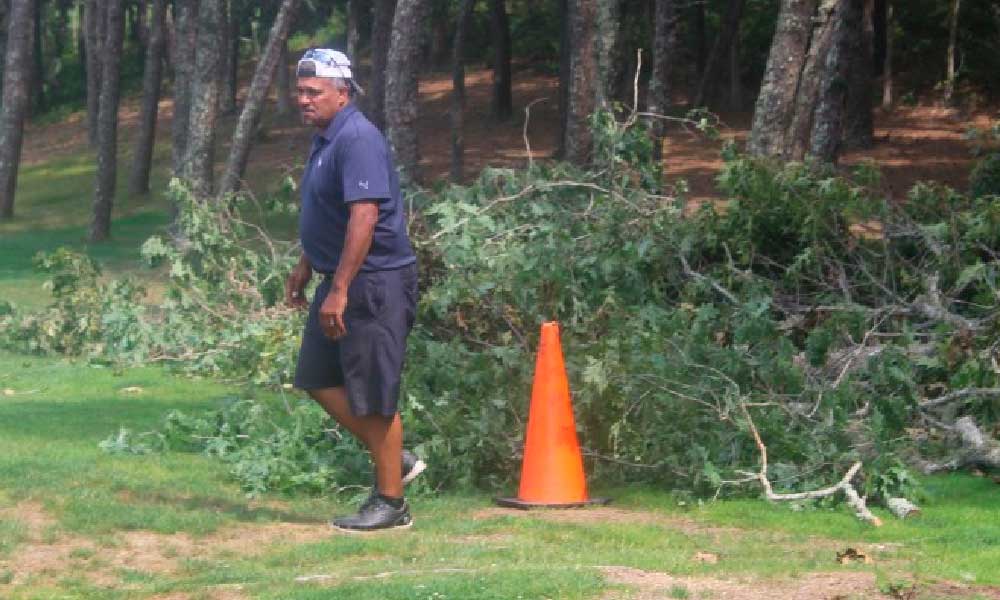 It took a major commitment of staff and tree service companies, but Cranberry Valley Golf Course is back in full swing.

The golf course was closed for nine days in the wake of July 23 tornado. Nine holes were open last Thursday and the full course was available for play on Saturday.

The closure was a major financial hit. The course suffered the loss of nearly 200 trees and will need replacements. The cleanup, loss of tee time revenues and staff overtime carried an initial financial impact estimate of more than $550,000 to the town.

It could have been worse, course officials said, if not for a five-year tree-cutting program.

Town officials want to move quickly to get the word out that the popular course is fully operational. Town Administrator Christopher Clark said it is important to get the word out because of comments made on social media that the course would be closed for the rest of the season.

Clark made a final inspection of the course on Friday, including a safety inspection, looking at the condition of the greens and fairways and making sure there were no overhanging branches that could fall, endangering golfers. Clark was particularly concerned about dangling branches along the cart path and locations just off the fairways and greens.

“The focus is on the cart paths and balls out of play,” Clark said.

With 187 trees lost, frequent users of the course expressed dissatisfaction on social media with the tornado not removing one tree in particular. Greer said there were a lot of comments about the tree on the right side of the 18th fairway as it turns down toward that hole. It has a reputation for redirecting a lot of golf balls, he said. Fernandez said Bartlett Tree Service came in immediately after the event and spent four days getting rid of “widow makers.” They cut and chipped a lot of loose branches in wooded sections of the course. Fernandez said the greens and fairways survived the tornado pretty well because there has been a tree cutting program in place over the past five years that focused on removing trees that encroached on greens and fairways.

“If we hadn’t done that, they’d have been down all around the greens and fairways,” Fernandez said.

However, there were a lot of big trees that came down, and Fernandez said Bartlett indicated it would take two to three weeks to remove them. Mayer Tree Service, which was handling major areas of damage in town, provided more heavy equipment. Mayer completed the work in a day and a half, Greer said.

“These guys pulled up their boot straps and said let’s get this done,” Fernandez said of his staff. He said four or five workers proficient with chainsaws started cutting and others followed and picked up. Fernandez said he brought his own trailer to load brush and take it to the landfill debris site. The greens and fairways were cleaned up in a day, he said.

Clark said the decision was made to haul branches and debris away, instead of chipping it on site, which would have meant a longer cleanup process. There remains a lot of brush to the sides of some fairways and those piles are marked with orange cones, a “wood hazard” so to speak. It will take some time to remove those piles, Fernandez added.

Greer suggested if a golf ball lands in the woods, under a pile brush, golfers shouldn’t move brush and branches around. “Take a drop,” he said.

Fernandez said it will take another week to clear away a lot of the brush. His staff is exhausted from all the work they have done to bring the course back, and Clark recommended having them work on the removal just a few hours a day during the mid-week.

Fernandez said there will be a long-term impact from the tornado for his staff as more of the branches in many of the trees die and need to be removed. “We could be cleaning up until Christmas,” he said.

With the opening of the course on Thursday, golfers returned. Greer said on Friday, a day that would normally average between 300 and 320 plays, there were 120 plays. He said staff called those golfers scheduled to play on Saturday and “every spot through noontime is booked.”

Greer said the Massachusetts Golf Girls Junior Amateur Championship scheduled for Monday and Tuesday was canceled because it was not certain if the course would be ready. “Without the tornado it would have been a great showcase for the course,” he said.

As for the tornado itself, Greer said the warning system in place can read lighting strikes within 15 miles of the course and warns golfer to take shelter. There was no lightning in the tornado, but an override from the pro shop notified golfers to leave the course.