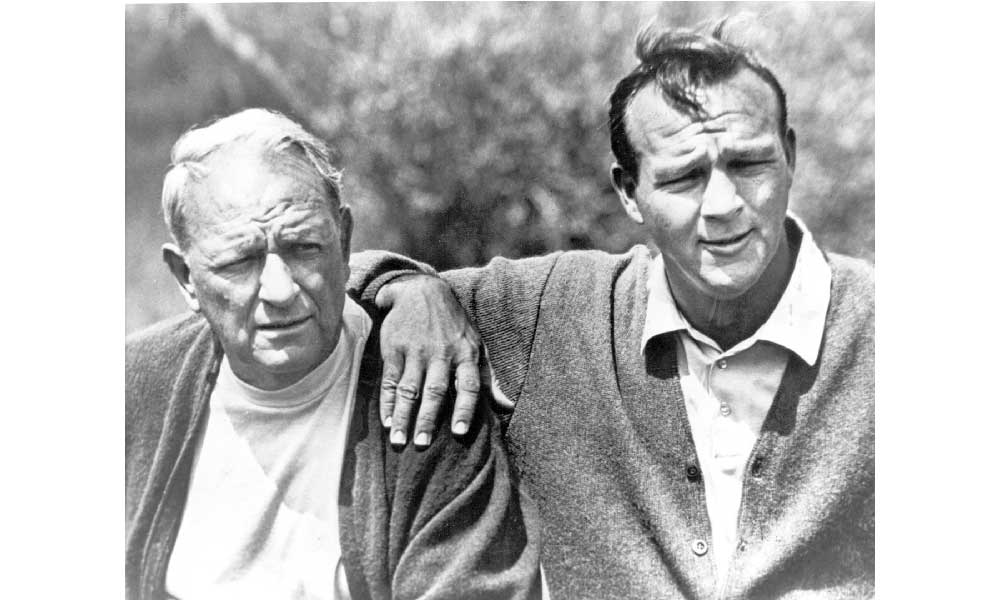 Milford “Deacon” Palmer, father of Arnold Palmer and also the superintendent at Latrobe Country Club for over 40 years, was a classic example of the golf course superintendent also having to be a master diplomat – if one’s idea of diplomacy happens to be a 10-pound sledge.

There was the time, for example, when young Arnie, then in charge of the Latrobe pro shop, had closed up early to sneak out and hit balls. And sure enough, along came that lone member wanting to play. And not just any member. Brass doesn’t come any brassier. J.R. Larson was chairman of the grounds committee and an executive at Latrobe Steel, which pretty much owned the club. That is, he was Deacon’s boss a couple times over. And Mr. Larson generously offered to discipline the wayward young Arnie for him.

To which offer Deke (his other nickname) responded to his boss: “Don’t tell me what to do with my kid. You take care of your business, Mr. Larson, and I’ll take care of mine.”

This tale came from Arnie himself, in his book, “A Golfer’s Life,” where he also tells of the invitation Deke once extended to Harry Saxman, none other than the club president. “Harry,” Deke said, “if you don’t like the way I’m doing the job, feel free to go hire somebody else.”

No – Deke didn’t have a death wish or a guardian angel or any juicy leverage on anyone on the board. You simply took Deke Palmer on his terms, or not. And they did. As Arnold summed up his dad: fierce independence, a rigid sense of right and wrong, demands of honesty and duty. And if some of Deke’s ideas seemed petty, they were nonetheless characteristic. For instance, pity the guy he caught wearing a cap indoors. A sin. God forbid. Take it off or get out, and for Arnie, that was an inherited trait.

As sometimes happens, a superintendent comes to think of the course as his personal jewel. And so it was with Deke Palmer.

“Pap was a tyrant about people chipping around his greens,” Arnie wrote. “He preached relentlessly on the importance of replacing divots and repairing pitch marks, and woe be unto the player — regardless of whether it was his own son or the club president – who failed to treat the golf course with the kind of respect Pap deemed necessary and proper.”

Deke was a complex man, but he was direct.

“Pap’s personality and character …” Palmer said, “…undoubtedly was shaped by those years struggling to teach himself to walk again … he developed even more rigid beliefs about what was right and what was wrong…You didn’t borrow money. You didn’t take what wasn’t yours; you didn’t lie, cheat, or steal.”

If ever there was a golf course superintendent without portfolio, Deke Palmer was it. Deke, son of a housepainter, came from the fields and mines of the foothills of the Alleghenies in Pennsylvania, not far from Latrobe. First, the awful burden. Deke suffered an attack of polio as a kid, and it left him with a deformed foot and a limp. He vowed he would walk again. He slaved and struggled, but he did walk. And if his lower body was weakened, his upper body was super. He could chin himself one-handed, 10 times and more, with either hand

He quit school at 15 and took a job as a mail runner in a mill. But he preferred the outdoors, and so he jumped at the chance to join the construction crew building Latrobe Country Club as an entry-level pick-and-shovel laborer. He knew this much about golf: That grass would grow if you let it. Otherwise, he didn’t know a fairway from a highway. But he was stubborn and determined, and he learned well and fast.

He worked at the course in the summer while it was under construction, and in the winter, he worked in a mill, and later ran a pool hall, where word was he shot a pretty good stick. They loved him at the club. At 22, he became the head greenskeeper, and in 1931, at 27, somehow having learned the game, he became the golf professional as well, selling equipment and giving lessons. And when Arnie became old enough, he was a dawn-to-dusk guy on his Pap’s crew. And he drove that old tractor. Arnie also worked in the steel mill, and he knew the bite of refractory brick in your hands when you’re relining a furnace.

Being the superintendent’s son did not make life simple for Arnie, by the way. The Palmers – Deke and Doris had two boys and two girls — lived in a house on the club grounds and owned by the club. It did not have running water. Arnie had to carry water for his mom to wash clothes. And the guys he was pals with in school weren’t his pals at the club. They were members’ kids. He was an employee’s kid. Arnie could golf early in the morning or late in the afternoon, when the members were gone, and he couldn’t use the swimming pool. He won the caddie tournament five times, the first at age 11, but wasn’t allowed to keep the trophy. “I secretly stewed about that for years,” he said.

As for Deke, in the role of the superintendent as a social animal, he was at home in any company. One night, he would go to the club and play poker with ranking members and prominent citizens such as Harry Saxman and Dr. H.R. Mather. The next, he could go down to the fire hall and shoot some pool and have a shot and a beer with Slim Balko and Red Yazvec and the guys.

It was one such night that led to a crisis in the Palmer family. Deke had had a few too many, and he came home and “began picking at my mother,” Arnie wrote. Arnie had turned 16 that day. He stood up to his dad, told him to leave her alone. Whereupon Deke reasserted his primacy in the household by picking Arnie up and slamming him into the stovepipe. Arnie ran away later that night, but before long he un-ran away and slipped back into the house. And Deke, it turned out, was as shocked as his son.

“…he never laid a hand on me in anger again,” Arnie wrote.

It was Deke who put his son on the path to changing the face of golf in the world, but not in any way you could guess.

Arnie was already a golfer and football player in junior high, and then he was a new ninth-grader at Latrobe High School, and he went out for varsity football. The coach rejected him. They didn’t have a uniform small enough to fit him, he was so scrawny. Arnie was one crushed kid. He ran home to dad. This was the time for a heart-warming father-son talk. But this was Deacon Palmer. As Arnie told it, his dad pretty much said, “Oh, quit crying. If you can’t play football, play golf.” And that was the historic moment when Arnie Palmer decided to become a golfer.

Deke was, of course, Arnie’s teacher, and he preached perhaps the most famous dictum in the game, based on the truism that golf is fundamentally an exercise in overcoming distance through force. Deke made the lesson simple.

He also taught his boy golf etiquette. A strong lesson came when Arnie won the 1947 Western Pennsylvania Junior and expected a hero’s ride home with mom and dad. But there was a stony silence in the car. It seems Arnie had missed a short putt at one point and threw his putter over the trees. Deke said, “If you ever throw a club like that again “you’ll never play in another golf tournament.”

Time healed all wounds, and years later, Deke & Son were a key team in adding nine more holes to Latrobe CC. And in 1971, after Arnie had become rich and famous, he told his dad he was thinking about buying the club.

“Are you crazy?” Deke said.

It was home, after all, Arnie explained. Even if he’d had to sneak onto the course to play.

“Besides,” Arnie told him, unable to resist a delicious needle, “it means you’d have to work for me.”

And as Arnie told it, there was a strange streak in his dad. Deke simply refused to praise him. Not ever on his amateur championships, not on his victories in the U.S. Open, the Masters, the British Open nor anywhere else, and not on his career in general nor on becoming rich and famous.

“I must admit,” Palmer said, “I really burned inside to earn a simple compliment from my father. But that compliment never came, which probably explains why I tried all the harder to please him.

“I was always pestering Pap to come to watch what I could do in hopes he would praise me, which of course he never really did. That simply wasn’t his style.”

Arnie had the last hurrah.

The original Latrobe CC was a built on largely open farmland. Deke planted most of the trees. And of all the trees he planted, his favorite was the red pine towering off the fairway, short of the 18th green.

Arnie was 6 when he planted it, and got to ride the root ball when the truck brought it in. Finally, in 1998, it had to be knocked down. Arnie had them leave a big enough stump, and called in a chain-saw artist to carve it into a statue of his dad. Deke Palmer still stands there, looking toward the final green.

As Arnie so plaintively closes his book, “I stood there looking up at him … deeply moved to have him back … wondering what my Pap would make of this golfer’s life. I still hope he’d be pleased.”

Marino Parascenzo, author of the book, Oakmont 100 Years, and recipient of the 2008 PGA Lifetime Achievement Award in Journalism, was host of an annual golf tournament called The Arnold Palmer Invitational for many years.

Jay Flemma says of him, “He was president of the GWAA when the first woman golf writer got into the tent and he brought her around to meet everyone, easing her transition.

He fought for better conditions for writers while they were on the road covering tournaments, he was responsible for getting court reporting companies to handle doing interview transcripts, and he’s written articles for every major magazine, including the programs for the U.S. Open and Major championships.

And yes, you’re right, he’s as humble and unassuming a man as you’d want to meet.”

Plus he’s a great story teller. If you ever need a firsthand account of some seminal golf history story, he was there. He gave me a great one about what it was like being in the media tent and the gallery at Southern hills when Hubert Green got those death threats in 1977. He’s a primary source, invaluable.

Several years ago, Parascenzo is quoted in the Pittsburgh Quarterly saying, “Even now, at 81, I still do a little advertising work, and make speeches and appearances here and there, usually in connection with companies I represent, and mostly in the U.S. And I still travel internationally on business. Unfortunately, I’m not playing a lot of golf these days. Sure, I still hit some balls and practice. And I play occasionally with my friends. (They still get a kick out of that.) But naturally, my golf game keeps deteriorating because I’m getting older. The challenge is still there, however. And no matter what, the fact that I still can get up in the morning and look forward to going to work is a blessing at my age. I just try to hang in there and keep doing what I do.”