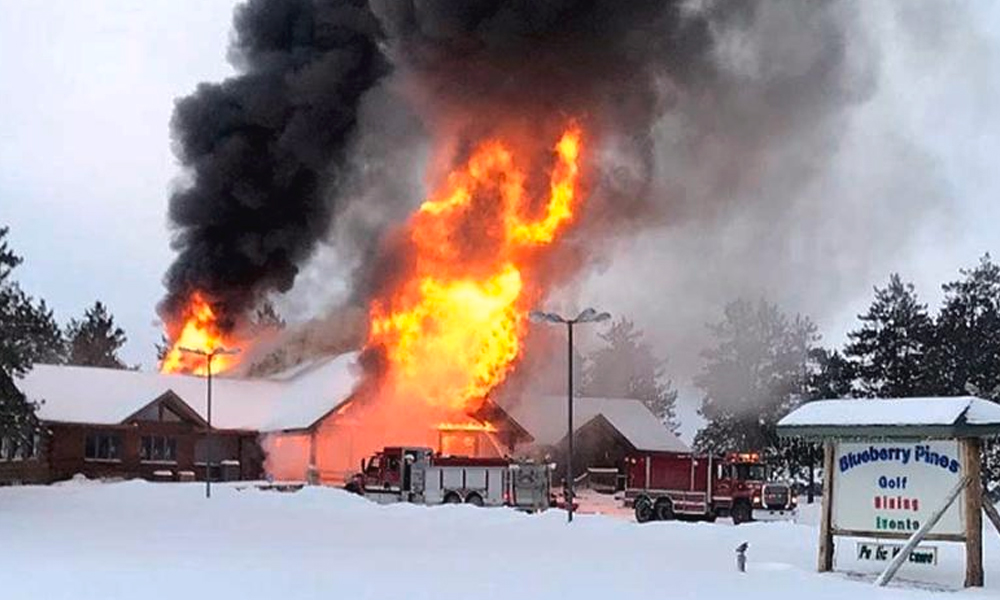 A building at Blueberry Pines Golf Club in Menahga was deemed a total loss after 11 fire departments battled an hours-long blaze Wednesday, Jan. 2.

The Wadena Pioneer Journal identified the building as the golf course lodge.

No injuries were reported.

The Wadena County Sheriff’s Office reported dispatchers received multiple 911 calls about 3:55 p.m. Wednesday regarding a fire at the golf course. Upon arrival of the first law enforcement, flames were already visible from the building. There was no one in the building when the fire started, the sheriff’s department reported.

After the Menahga Fire Department arrived on scene, mutual aid was requested from Sebeka, Park Rapids and Wolf Lake. Due to the fire’s intensity, the Menahga fire chief requested further assistant from Wadena, Verndale, Staples, Akeley, Nevis, Bluffton and Carsonville. As of 9 p.m. crews remained on scene. Firefighters used about 300,000 gallons of water to extinguish the fire.

According to the sheriff’s office, a golf course employee put logs into an enclosed wood stove in the building’s basement about 2:45 p.m., although it is unknown if this was the cause of the fire. Propane was the building’s main heating source and the wood stove was supplementary.

The Minnesota State Fire Marshal’s Office and the Minnesota Pollution Control Agency arrived on scene Thursday morning and do not suspect foul play.