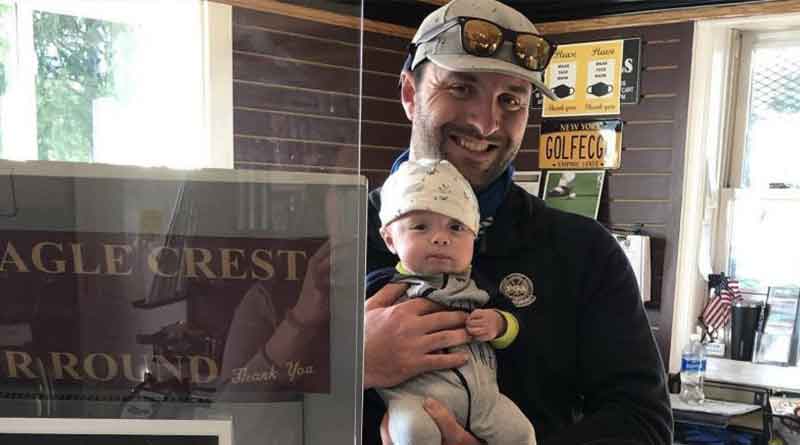 In many ways, new Eagle Crest Golf Club owner Scott Battiste always felt that the popular Clifton Park layout previously owned and operated by the Paulsen family was like his second home. Now he wants to make his customers feel the same way.

Battiste, a 34-year-old Niskayuna native, was first an assistant pro and then the head pro under Bill Paulsen Jr., whose father purchased the course, formerly known as Northway Heights, from the original course builder and owner, Gino Turchi.

Battiste often played at Eagle Crest GC as a youngster, splitting his playing time with Schenectady Municipal when his parents would drop him off to play golf every weekend. He even picked up golf balls on the range as a 15-year-old kid. The self-taught pro got his first full-time job in the business as an assistant pro at Eagle Crest for four years, and he later returned to the course for a second stint for the last seven years.

Battiste first thought about purchasing the course from the Paulsens a few years ago, but the deal didn’t go through until last September.

“We’ve been sort of talking about it for a few years — not in the sense of numbers, but in the sense that at some point when they wanted to retire, I’d be interested,” Battiste explained. “There was mutual interest between the two of us. Last spring, while he [Paulsen] was in Florida, he said, ‘Let’s sit down and talk about it,’ and we did.”

Battiste and many of his family members, including his father, Dave, and brother Joe, along with a close family friend, decided to pool their resources, and Scott’s expertise, to buy the club.

“I’m the person on-site every day, but I certainly didn’t do it all myself,” he said. “My family is definitely involved. At least most of them. My father is retired, and the others have other jobs but some of them were involved with the finances. I’m the person who is here, and it was my vision. They are entrusting me with being in the golf industry to take the lead.”

Even Battiste’s wife, Kayla, is part of the family business as a part-time facilities coordinator. Their baby son, Archie, is quickly becoming a fixture, as well, as Scott teaches him how to play — sort of.

“Nothing is ever seamless, but I would say that after working here for numerous years, that I was familiar with the customers and the way things were done here previously,” Battiste said. “It’s been a very smooth transition. We’ve integrated some new things and some new ideas. There are new systems in place. But the golf course was always great, and the customers were always great. It’s not like we had to tear it up and start all over. We already stepped in with a great product, and all we had to do was to shore up the things that needed to be shored up.”

“We took over the restaurant and hired a chef, who is the kitchen manager,” Battiste explained. “We just opened the restaurant last week. We also did significant renovations to the tavern, and it looks great. We are really excited about it, and our customers are also excited about it. Our chef is doing a great job, and her menu is well received.”

“We want to run our lessons like a golf academy. Scott is the main guy, but he’ll be working with John Peterson and Jack Thornton giving lessons and club fitting. We are building a TaylorMade club-fitting studio since Scott is the TaylorMade rep for our area. We really wanted to focus on one club manufacturer, and we think TaylorMade is the best,” he said. “Both Scott and myself play TaylorMade clubs. We have all the shafts, all the heads, and all the technology.”

Eventually, a club-fitting studio will be built on the driving range, and demo days will be offered on Saturdays every couple of weeks.

“We want to have a place where you can hang out after golf. We want a big patio with fire pits corn hole boards and other activities,” he said.

Although there are areas to be tweaked, Battiste said the course itself is in excellent shape.

“As for the golf course itself, there is not much to be done,” he said. “We cleaned up some areas, and we’re working on drainage. We’ve got the same great course superintendent, Todd Kehoe, who was already here. We would have never bought the course if we didn’t think it was fantastic. Like I said, it’s like a second home to me. I’ve been here forever. We’re trying to make it a really cool place for golfers to enjoy, and also for the community to enjoy holding events here, like parties and even weddings.”

Battiste believes that Eagle Crest provides challenges for golfers of all skills.

“It’s basically a wide-open course, and its biggest defense has always been the greens, and that will continue to be so with all the undulation and speed,” he noted. “We try to make it playable every day for anyone, but also a challenge for the best players in the area. That’s our goal. We want to challenge the great players, but we want it to be incredibly playable for everyone else.”

Eventually, there will be some added tee boxes with some changing yardages as Battiste and his crew mull over future ideas on how to get people to enjoy the course even more.

Battiste fell in love with golf early on, but he didn’t play varsity golf in high school.

“I did play golf, as I said, at Eagle Crest and Schenectady Muny, but in high school, I played soccer, hockey, and baseball,” he said.

“I loved every sport I played while I was doing it, but golf was always my favorite. I was basically self-taught, and I didn’t take a lesson until I was 19. If I wasn’t at another sporting event, I was hitting a golf ball somewhere, whether it be in my yard or in my basement. I broke three windows playing golf in my parents’ house, and when my dad got home from work he would always see divots in our yard.”

“I cried when he won the Masters,” he said. “I know he’s gone through some things, but he’s fun to watch and he loves what he’s doing. I’m always super competitive myself. The competitive aspect of it is important to me, but at the same time, I love playing with my father, my brothers, and my friends.”

Battiste has won about 10 pro events in his career, including a major, the NENY PGA Match Play Championship at Normanside CC in 2017. He’s competed in the NY State Open five times. The former NENY PGA Assistant Professional of the Year has a career-best round of 7-under-par 65 at Eagle Crest.

“The best part of my game is my short game, especially chipping. But I have a love-hate relationship with my putter,” he said, adding that he used belly putter years ago before it was banned by the USGA. “That was one of the worst days of my life when they outlawed the belly putter.”

Battiste also worked as both a bag boy and an assistant pro at Normanside CC earlier in his career but has spent the majority of his pro career at Eagle Crest GC.

“One of the great things about me taking over here is that I’ve already gotten to know the customers,” Battiste pointed out. “I know what they’re looking for, and personally, being a golfer who plays at other places around the country, I can take all the things I love when I go to other places and try to implement them here. This place has always been run very well, and obviously, the people who play here enjoy it.

“Being a pro and owning a golf course is something I’ve always wanted to do.”