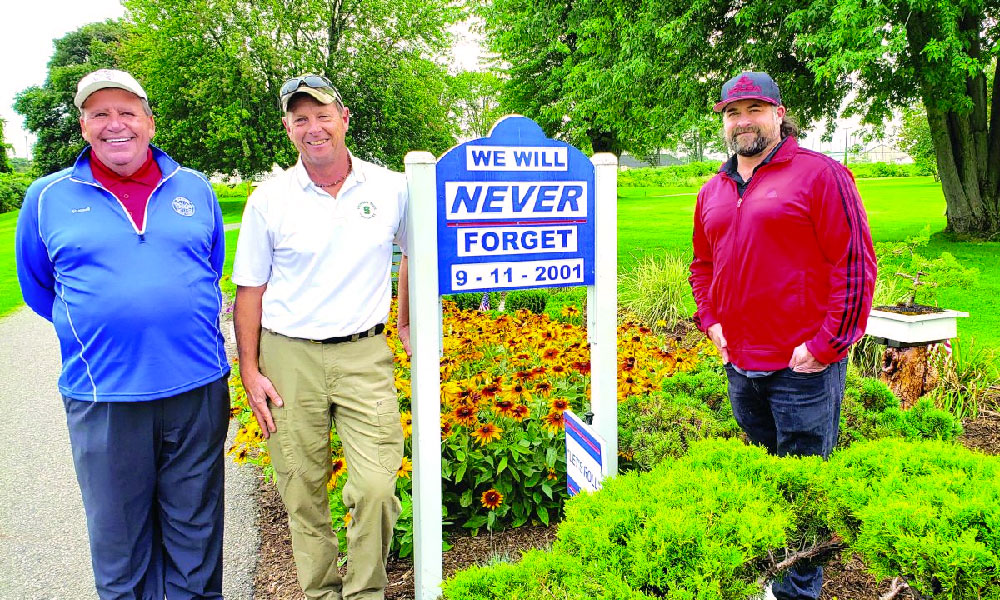 With meticulous detail, an ordinary landscape has turned into a memorial.

Workers and volunteers at Selfridge Golf Course, situated in the southeast corner at Selfridge Air National Guard Base in Harrison Township, take great pride in a 9/11 memorial garden on hole No. 12.

The flower garden memorial began three years ago, thanks to the creation of an adopt-a-flower program.

“We started a volunteer program to adopt a flower bed at the course, and three years ago, Brink decided to take this one over,” Selfridge Golf Course Superintendent Jim Blauvelt said. “He wanted to do something to honor his grandfather.”

Brink Cawley has golfed at Selfridge most of his life, and in addition to frequently hitting the links, he gives back to the course.

What makes the memorial garden remarkable, Blauvelt said, was that on Sept. 11, 2001, some of the components of the garden were planted.

“They were planted in the afternoon that day,” he said. “We watched everything transpire on 9/11, and some of the shrubs were here. I knew I had to do something, so we came out and planted more,” he said.

The garden, which measures around 45 feet by 15 feet, includes a pair of Pencil Hollies that represent the twin towers, a gold-tipped juniper that was planted on 9/11, and globe arborvitaes formed in the shape of the Pentagon.

On 9/11, the two tallest buildings in the World Trade Center complex in New York City were destroyed, leaving over 2,600 people dead. At the Pentagon in Arlington County, Virginia, 189 people were killed after a hijacked plane slammed into the west wall.

When Cawley heard about the 9/11 planting, his idea for a greater tribute was conceptualized.

“Just those plants being there from that day is symbolic,” he said.

Much detail went into the placement of shrubs and plants.

“We had the bench set up and wanted to put the Pentagon and orient it with the twin towers,” Blauvelt said. “We got a compass out to make sure everything was facing the right way.”

The globe arborvitae shrubs to memorialize the Pentagon were planted in the spring.

A pair of signs are also posted at the garden.

One sign has “We Will Never Forget” in blue lettering, with “9-11-2001” underneath. The other sign reads ‘‘Let’s Roll.’” In the final moments leading up to a fatal crash in a field in Somerset County, Pennsylvania, United Airlines Flight 93 passenger Todd Beamer famously said, “Let’s roll.”

Blauvelt said the signs were designed by a retired Air Force colonel and F-16 pilot.

Golf course volunteer Russell Coburn assisted with planting the flower garden and said he wanted there to be a sign that said, “We Will Never Forget.”

“That’s beautiful the way it is,” he said. “I was moved by the thought of doing it.”

Coburn has volunteered at the course for around 15 years.

“Since Selfridge is a military base, and the active role that the military played on 9/11 to protect the country, we’re thankful for our military,” Blauvelt said. “When you think about 9/11, you think about the people that lost their lives and how you can pay tribute to them.”

Cawley sees the garden as a simple way to give back.

“People will come out, not even with golf clubs, to come to see the hole,” he said. “My uncle, father and I were talking after my grandpa passed, and we wanted to do something and give back to something that has given us so much throughout our lives.”

The reason the garden is on hole 12 is that Cawley’s grandfather, Max Cawley, played football at the University of Utah and was No. 12. Max Cawley was a commander on the USS Lexington and fought in the Battle of the Coral Sea in World War II.

At Selfridge on 9/11, Blauvelt said the base’s threat level was increased to force protection condition, or FPCON, Charlie. That level describes a situation when a global terrorist attack has occurred. It took Blauvelt an hour and a half to get on base the following day.