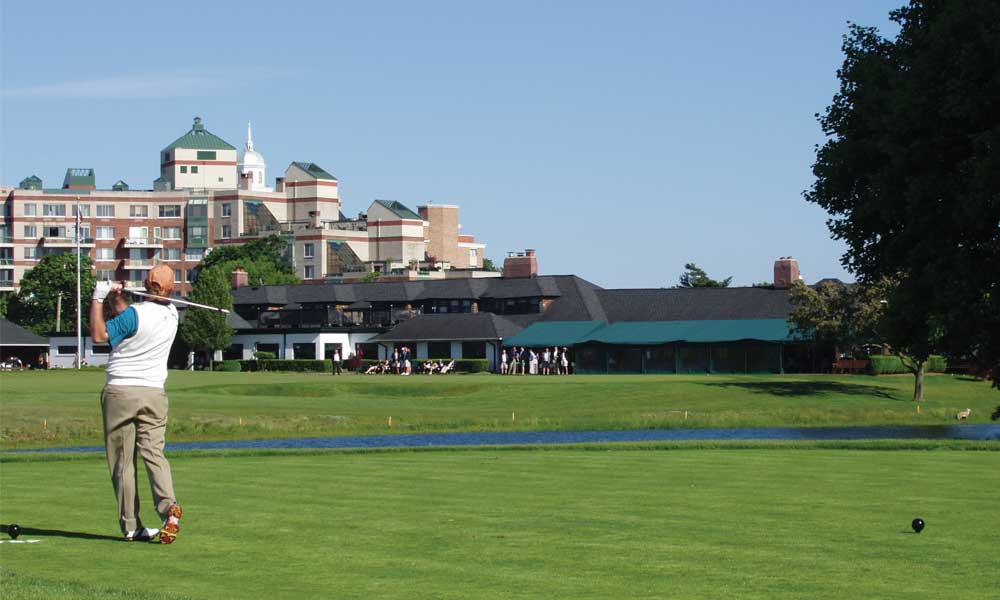 Winston Churchill – an avid golfer for a few years – famously wrote, “History with its flickering lamp stumbles along the trail of the past, trying to reconstruct its scenes, to revive its echoes, and kindle with pale gleams the passion of former days.” When it came to golf design in the last half of the 20th century, Churchill was prophetic. Too many glorious Golden Age courses were “modernizing” by erasing the wondrous strategic features the original architect built, and replacing them with boring, center-line penal architecture designs that were harder, but so infrequently better. Many once-great clubs were becoming pale images of their past, completely erasing the character that made them so indelible – their lamps barely flickering. 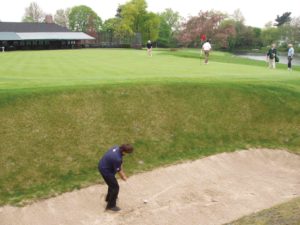 But if there is any American course that would have inspired Churchill with their success at preserving and protecting not only their own precious history and heritage, but the game’s as well, it would be Wisarden City Golf Club, the indisputable masterpiece of Devereux Emmet and Walter Travis. It is Garden City’s imprimatur, indeed their raison d’etre, to make every round a walk through golf history.

Garden City is one of those courses that materializes out of the mists of time like a reverie. Spoken of in the same holy whispers as such storied clubs as Fisher’s Island, Pine Valley, and Cypress Point, even the most jaded and well-traveled golfers look forward to a round at Garden City with nervous energy and excitement, yet nothing prepares you for its absolute majesty once you step on the grounds.

Opened in 1899, Garden City acquired instant acclaim for Devereux Emmet’s unusual asymmetric par-73 routing and his cunning use of the terrain. Emmet, you’ll recall, is considered one of the country’s quintessential architects. He not only built major championship venues like Congressional’s Blue course, but many other designs that are cherished as Golden Age treasures, such as Leatherstocking Golf Club in Cooperstown, New York, St. George’s Golf and Country Club in Stony Brook, and Rockaway Hunting Club in the Five Towns area of New York City. Still, even compared to those lofty standards, Garden City was Emmet’s magnum opus. 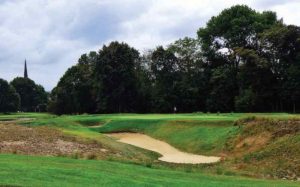 Garden City has all three attributes required of a truly great course: vertical movement in the earth, lateral sweep to the fairways and hazards, and outstanding green contours. The golf course is divided into three parts. First, the Inner Loop – five holes near the clubhouse (1, 2, 3, 17, and 18). Next, the “Great Hempstead Plain,” a wide, windswept swath of holes 4-8 and 13-16, idyllically set in the midst of a charming neighborhood beset by swirling winds laid out on a roughly north-south axis. Finally, there’s “The W” – the stretch of holes 9-12 bordering the far edge of the property, called “The W” because they are laid out, end-to-end, in V-groove-like angles in that shape.

As usual, Emmet’s par-5s are all showstoppers. The fourth hole, the golfer’s first glimpse of the wide windswept heath, features a fairway that tilts from right to left off the tee, but then reverses itself to cant from left to right on the second shot. The seventh features dangerous cross hazards at positions right where the golfer would like to land the ball, a common theme throughout the day. The thirteenth curves like a scimitar, rumbling amidst deep bunkers and rough covered mounds, and the iconic 17th features the beautiful spire of St. Paul’s Church as the target for the tee shot.

The par-3s are equally fascinating. Appearing at one of the most unique sequences in golf – the second, 12th, and 18th holes – they are each museum pieces. The second is one of the world’s great Quarry par-3s.

“It plays like a short Redan, requiring just and 8 or 9-iron, but it’s completely surrounded by drop-offs and bunkers, and the green tilts dangerously away from the player,” explained golf design expert Bruce Moulton.

The 12th recently had its one-of-a-kind mounds-within-the-green hazard, where golf balls can end up hard against a vertical backstop.

“We couldn’t build the mounds in the green back to the 3-foot height they once were and maintain them at modern green heights of cut,” explained Tom Doak, the architect overseeing work at Garden City for several years now. “So it was imperative to make them as steep as we could. We shaped them on site and Dave [Pughe, the former super] eyeballed them for mowing and whether he could drive a sprayer over them.” The result is both visually arresting and remarkably creative.

The 18th is one of the best finishing holes in the world and what Doak rightfully called “The Best Eden Hole in America.” The setting is perfection: the clubhouse veranda is adjacent to the green, so all your friends can watch you finish, while the stately Garden City Hotel stands sentinel behind. 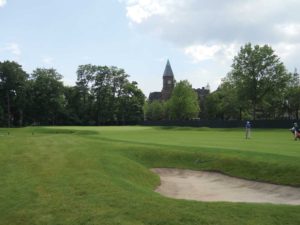 Garden City proved so wildly popular, it hosted the 1902 U.S. Open won by Laurie Auchterlonie and the 1908 U.S. Amateur won by J.D. Travers, but the course the contestants faced that year had several crucial differences from the one in 1902 – the course had undergone changes suggested by Walter Travis.

Devereux Emmet designed Garden City, but Walter Travis is the club’s patron saint. In 1904 at Royal St. George’s, Travis won the British Amateur, becoming the first American golfer to do so, and his victory buoyed him to write an American Golfer article about how to make Garden City more competitive for the upcoming 1908 Amateur. He suggested deeper bunkers and more internal contours to the greens. The club approved, and off he went with a shovel. It’s said Travis dug his own grave, as one of the bunkers he deepened was the front left greenside bunker on 18…a bunker he landed in during the semi-finals against eventual winner J.D. Travers. Travis took three swings, but never escaped the bunker. It cost him the match, and the bunker’s been known as “Travis’s Coffin” ever since.

Travis did, however, win the club’s Spring Invitational nine times, and the tournament now bears his name as “The Walter J. Travis Invitational.” The Travis is to amateurs what the Masters is to pros: a revival and a reunion, as well as a major championship for Mid-Amateurs. Any time you come to Garden City, you bask in the club’s Old World charm. But for one week, it’s Christmas May – a celebration of golf history, tradition, and competition equaled by few courses anywhere in the world. A Friday qualifier pairs a 150 player field into five match play flights, including a championship flight of 16. The tournament is single elimination match play for the rest of the weekend.

The quality of player the tournament attracts is staggering; well-decorated state amateur champions can lock horns with former U.S.G.A. championship winners or Walker Cup players in any flight, one through five. It’s a Who’s Who of amateur golf. The winner claims a replica of the Schenectady putter Travis used to win the British Am as a trophy. And to the members and the players, that’s as bright a beacon as even Churchill himself could have wished for.

Sherman, ASGCA, to lead redesign of Sea Island with Love Golf Design
What is This, the Symptom or the Problem?
To Top