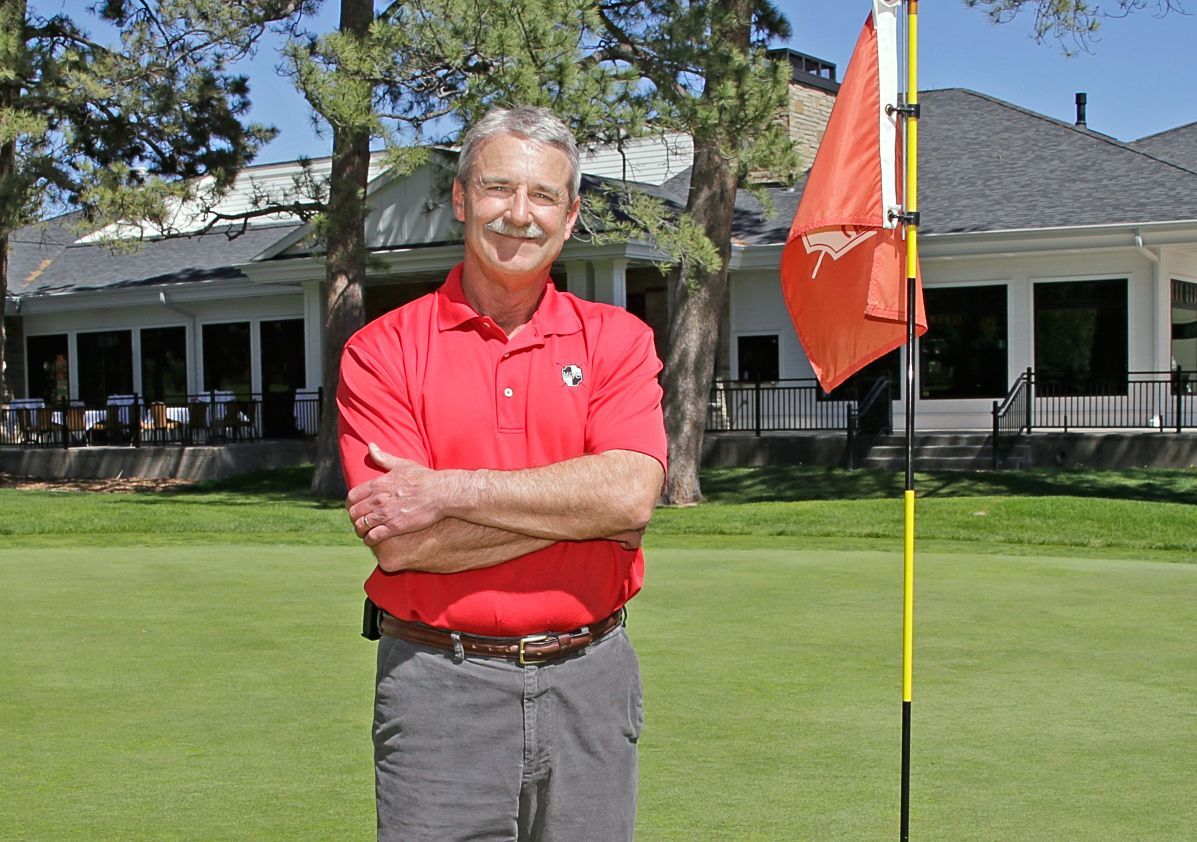 He is still fondly referred to as ‘Pete Weed’ or ‘Petey Weedy’ around his home course at Hilands Golf Club in Billings, but Pete Grass also answers to another name these days.

The 56-year-old certified superintendent at the private, nine-hole facility off Poly Drive is the newly elected president of the 17,800-member Golf Course Superintendents Association of America (GCSAA).

‘I’m the 80th president of the association, but the first to ever be at a nine-hole facility,’ he said.

Grass started 41 years ago at Hilands as a bag boy, washing clubs and cleaning golf carts during the summer.

‘When a position opened up on the grounds crew, I took that and never left,’ he said.

With a fitting surname for his profession and a pledge to maintain his loyalty to the little guys of the golf business, he can now be found gracing the cover of the March issue of Golf Course Management magazine, decked out in a suit and tie.

The GCSAA, started by greens keepers in 1926, is a leading advocacy organization for the golf course management profession and the golf industry. It has members in 72 countries.

‘He is at the very pinnacle of the industry,’ Hilands member Bruce Posey proudly observed. ‘That’s tough to do.’

The well-respected Grass, who put aside his work gloves for an interview in the clubhouse, was elected president of the GCSAA in February at the Golf Industry Show in San Diego.

While he said he wasn’t feeling a lot of pressure as the first president to come from a nine-hole facility, Grass said, ‘I’ll be honest, there is a little.

‘For those who may perceive that a nine-hole golf course or maybe a nine-hole superintendent is not as professional or as accomplished as someone at a larger facility, I’m here to show that I am, and that I can hang with the big boys.’

Since beginning his one-year term as GCSAA president, Grass has already represented the organization at meetings in The Netherlands and at The Masters.

He will be at the annual gathering of the American Society of Golf Course Architects this weekend in Washington, D.C., and will return to the nation’s capital May 18 in recognition of National Golf Day.

The meetings and receptions with groups such as the United States Golf Association, PGA of America, PGA Tour and National Golf Course Owners Association, don’t just center on agronomy or the latest equipment, either.

Grass said the GCSAA, for instance, is also working to make sure the organization has proper representation when it comes to dealing with pending national legislation involving water and labor regulations.

Two months into his term, and without getting too much into the weeds, Grass, who also directs the GCSAA board meetings, said he is enjoying himself.

‘There’s more behind-the-scenes work than I anticipated, but I’m not regretting it for a second,’ he said. ‘There are a lot of really fun experiences, such as going to a few international events. I also get to represent Billings and the Hilands Golf Club, too.

‘I’m proud of both of those things.’

Grass, a Minnesota native, has lived in Billings since age 9, started playing golf at Lake Hills Golf Club at age 12 and was on the golf team at Eastern Montana College (now MSU Billings).

He is on the board of directors for First Tee of Montana, which promotes golf and its life skills to local youngsters.

“I know that I’ve become a better person, a better boss and a better superintendent by my service with the association and its members,” he said.

Grass has been a member of its board of directors since 2009, working alongside superintendents from major courses but also keeping the little guy in mind.

Grass already has quite a history as an arbitrator, having served nearly 24 years as a volunteer umpire for Big Sky Little league.

Since 1990, though, Job 1 has always been to overlook the tees, greens and bunkers as the superintendent at Hilands, which has 275 golfing members.

‘They’ve been very, very supportive,’ he said of having the backing of the club’s administration and golfers for his work with the GCSAA. ‘I’ll be gone from my job (at Hilands) about 140 days, so I’m very happy that they’re supporting me.’

Out of nearly 15,000 golf facilities in the United States, around 4,200 are nine-hole courses, Grass said. The GCSAA, headquartered in Lawrence, Kan., provides educational tools, resources and a collective voice to its members.

Grass, who has served a number of different leadership roles in the local Peaks & Prairies GCSA over the years, said the smaller courses have a lot to offer for enhancing the growth and vitality of the game.

‘A lot of time, nine-hole superintendents have to be more inventive to figure things out on their own or manufacture something on their own because they can’t just run out and buy it,’ he said. ‘They can’t just hire a consultant to come in and do it.’

Grass typically works 11-hour days, six days per week at Hilands, which opened in 1923 and is the oldest private club in Yellowstone County. The course, which has many trees, occupies 43Ãƒâ€šÃ‚Â½ acres of the 45-acre facility.

“I find it interesting and challenging because every day is different,” he said.

‘One thing I do more than anything is run around in a cart and pick up branches and pine cones,’ he said with a laugh.

Grass and his wife, Charlene, will mark their 36th wedding anniversary in June. They have raised five kids, with their youngest son, Stephen, 26, serving as assistant superintendent at Hilands for the last 1Ãƒâ€šÃ‚Â½ years.

‘All of my children have either volunteered to come with me to work or have worked for me,’ Grass said. ‘Finally one of them actually caught the bug to maybe do this for a career. I think it’s wonderful and he has done a great job.’

In addition to his own golf resume, Grass’ surname was a bonus for the GCSAA, which headlined its press release with ‘Grass sets out to keep GCSAA growing.’

‘Our communications department loves it,’ he said.

The Seattle Times also poked a little fun at him in a recent Sideline Chatter column. He said a Twitter hash tag ‘Bornforthejob’ was created for him.

‘I’ve taken a good ribbing over the years about my name and I’m certainly fine with that,’ he said.

Grass will attend the U.S. Open, PGA Championship, Ryder Cup and Olympics in the coming months. He will also get to play in a two-day Pro-Am this summer as a part of the PGA Tour’s John Deere Classic.

In early May, the GCSAA board of directors and executive staff will be in Billings for a strategic planning meeting, he said.

Grass believes that the group will like what they see during their visit.

‘In my opinion the golfers in Yellowstone County are really blessed,’ he said. ‘As I travel the world, there’s some really good golf facilities right here in Billings.

‘For a town of 100,000 to have nine different golf options ÃƒÂ¢Ã¢â€šÂ¬” everything from Par 3 to a country club atmosphere ÃƒÂ¢Ã¢â€šÂ¬” at courses that are very good architecturally and very well-maintained, Billings has a lot to offer. That’s not true in a lot of places.’