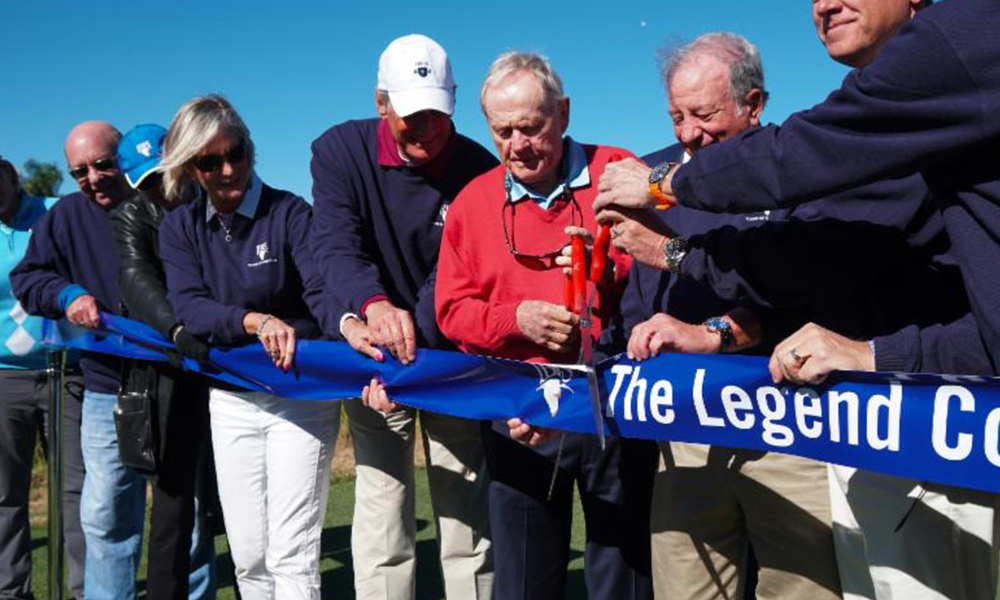 Golf legend Jack Nicklaus was at The Club at Ibis on Wednesday to officially reopen the aptly-named Legend Course in front of more than 400 members. Nicklaus built the course in 1991 and his renovation featured the changes in golf and Nicklaus’ design philosophy during the last quarter-century.

“When I built this course, there were no trees or houses here,” Nicklaus said before hitting the ceremonial first shot – in the middle of the No. 1 fairway, naturally. “We lengthened it from the back tees and shortened it from the front. We did a whole bunch of things to make it more pleasurable for the member here at Ibis. What you have is a modern golf course.”

The par-72 Legend Course, which hosted the Office Depot on the LPGA Tour from 1997-to 2000, was lengthened from the tips by more than 300 yards, to 7,442. The shortest tees measure slightly more than 4,500 yards. Nicklaus also took out a lot of the waste areas he used to frame the original design. All of the greens were re-contoured and the fairways re-grassed.

“We tried to increase the strategy members can use,” Nicklaus said. “I think we made it a much better golf course.”

Nicklaus lives 15 minutes away from The Club at Ibis, allowing him to make many trips during the renovation. That personal touch came through with his renovation.

“We’re really excited to have Jack take such a personal interest in our golf course,” said Stephen J. LoGiudice COO/GM of The Club at Ibis. “He’s obviously extremely busy, but thanks to our proximity to his home, Jack was very involved. The new course is exciting because you can play it at any skill level and it’s a challenge at any distance.”

The Club at Ibis remains the only place in the world that features three golf courses by different members of the Nicklaus family. Sons Jack II designed The Heritage and Steve designed The Tradition.

As part of the day’s ceremonies, PGA Tour star Daniel Berger did a clinic for Ibis’s members with Director of Golf Instruction Martin Hall. Berger, ranked 28th in the world, is the son of Ibis’s new Director of Tennis Instruction, Jay Berger.

About The Club at Ibis

Ibis is a secure, gated collection of 33 distinctly different neighborhoods located on the quiet edge of northern West Palm Beach and just minutes from the heart of the city. It is adjacent to the pristine Grassy Waters Nature Preserve, a 12,000-acre, state-protected preserve, with wildlife, birds, and tropical vegetation. The Clubhouse recently underwent a major enhancement and expansion to include three new dining venues and banquet accommodations for up to 450.  A new Sports Village opened in 2014 to include fitness facilities, an aquatic center, a 4,300 square foot spa, and a yoga wall. The 16-court Tennis Center holds friendly tournaments and weekly group play.  Championship golf is offered on three Nicklaus family-designed golf courses.  Top golf instruction is headed by Martin Hall, ranked by Golf Digest as one of the game’s Top 50 instructors. For more information, call 561.625.8500 or visit www.clubatibis.com .