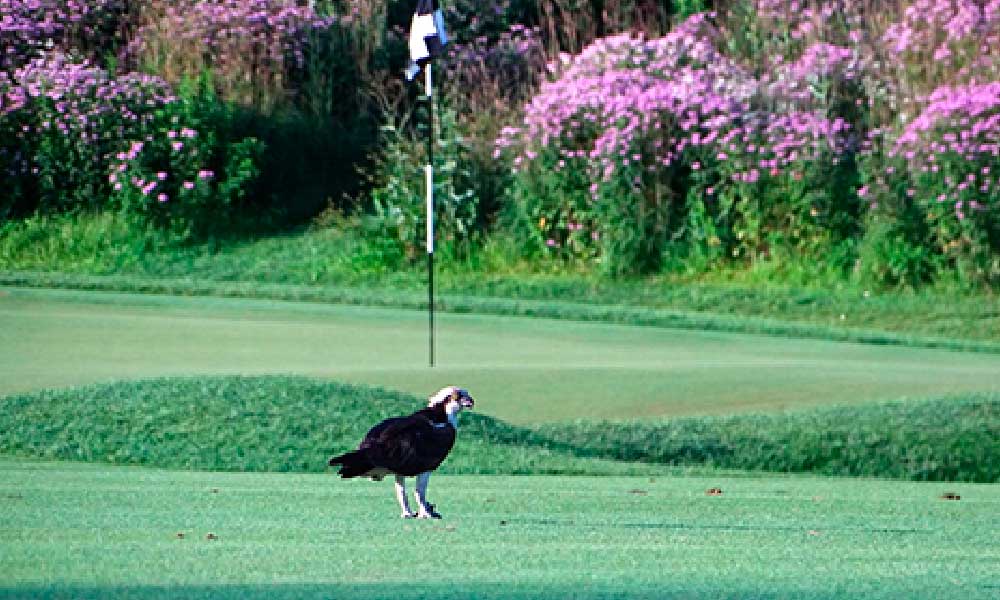 Some things are worth waiting for. Twenty-four years to be exact. In 1996, Keller Golf Course Superintendent Paul Diegnau was approached by a boy scout looking to fulfill his Eagle Scout project. More specifically, the boy scout needed a spot to install an osprey nesting platform.

Never one to turn down an opportunity to assist Mother Nature, Diegnau agreed to a location on Keller’s 12th hole along Highway 61 and across the road from Keller Lake. In addition to being an award-winning golf course, Keller is also a nationally certified Audubon Cooperative Sanctuary. More than 110 bird species have been identified on its grounds, and the addition of a platform was a natural fit.

A power company drilled the hole and installed the platform. So began the wait for new occupants.

The first five years were uneventful except for the occasional red tail hawk seen perched on the tower. As the years progressed, lone ospreys would be observed on the platform for short periods of time, but they never stayed around.

Around 2012, Keller had its first encounter with a pair of ospreys that showed interest in the platform. They lasted two weeks and disappeared, which was quite a disappointment for Diegnau and his staff.

Around this time, Diegnau was in communication with several local osprey “experts,” hoping to gain insight into the lack of success.

“We were told the location of our platform was wrong, too close to surrounding trees, people and the highway. I recall one person even telling us we should move it or take it down,” Diegnau said, recalling how disheartening the feedback was.

One definite problem was the bald eagle family living across the road on Keller Lake. As it turns out, eagles and ospreys don’t play well together. Eagles are proficient at harassing ospreys and stealing their fish, and it was going to take a resilient couple to make the nest site work.

A pair of ospreys then showed up in spring 2018. They started constructing a nest and seemed content with the location, but left within two months. In 2019, another pair attempted to nest, actively breaking dead branches off trees in mid-flight for nesting material. They used the grass divots lying on the fairways to line their nest. There remains some confusion as to the outcome of this nesting. The pair appeared to be incubating and tending to eggs for weeks on end. Chicks were never visually confirmed in the nest and the eggs were assumed to be infertile. A volunteer osprey monitor had been watching the nest that summer and claimed there were two chicks that he believed were preyed upon by owls. Regardless, no young were fledged.

This past season, a very persistent and tenacious pair of ospreys claimed the tower. They were fearless against other ospreys and eagles and held their ground.

“The aerial battles were fun to watch,” said Diegnau.

The female osprey sat on eggs for more than 30 days and eventually the parents were tending to young. Soon, glimpses of two small, white heads could be seen from above the rim of the nest. There seemed to be a steady stream of fish showing up at the nest and the chicks were growing fast.

One day in June, one of the chick’s legs had fallen through the wire mesh supporting the nest and became stuck. Twin City Metro Osprey Watch was contacted and came on site within hours to rescue the chick and reline the bottom of the nest with grass. Meanwhile, mom and dad circled above watching the drama unfold, taking an occasional dive at the intruders. During the rescue, the second chick was discovered to be half the size of the other. That chick did not make it.

The healthy fledgling made his first flight in early August. He was very noisy and constantly demanding food. Now that he has learned to fish, things have quieted down. Last month, the young bird began its long migration to Mexico, Central or South America, alone, using only instincts to guide it.

Was the wait worth it? According to Diegnau, “Most definitely yes! We look forward to the return of the Keller ospreys next spring and will continue to enjoy the trials and tribulations of their lives.”