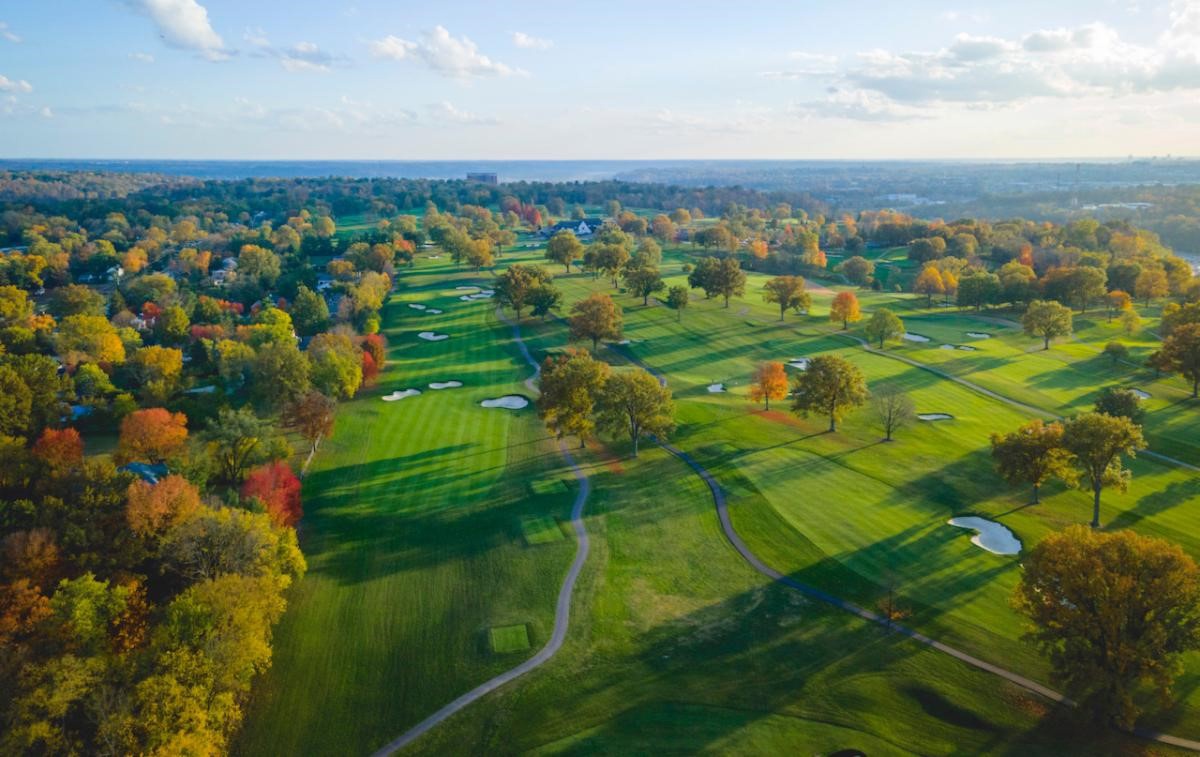 Ground was broken here, north of downtown, in the Autumn of 2019, following three years of careful preparations and master planning. The renovated Kendale layout had been poised to fully re-open last summer, but Covid-19 intervened. Members enjoyed some limited play in the fall of 2020, but June 2021 has been slated for an official reopening.

“We experienced just enough of a sneak preview last fall to knock everyone’s socks off,” says Kenwood Chief Executive Officer Dylan Petrick. “Still, the Board, our Course Superintendent Kent Turner, and our new Director of Golf Shawn Costello all agree the renovation won’t be fully realized until the Spring 2021 growing season is over.

“I think the members always knew we had the bones of a world-class, vintage golf course here. But what Fry and Straka have uncovered, revived and created here is pretty extraordinary. We can’t wait to show it off.”

The original 36 at Kenwood Country Club was designed by architect Bill Diddel and opened in 1930. The club had retained Donald Ross two years prior. He is, in fact, responsible for identifying the 341-acre property on which the club sits today. But Ross wasn’t hired to design the course. No one is quite sure why, Petrick says. And no one is complaining. Diddel’s work proved quite spectacular: The Kendale Course hosted the U.S. Amateur just three years post-opening, followed by the 1954 Western Open and the 1963 U.S. Women’s Open.

Diddel is, in fact, one of the unheralded heroes of golf’s Golden Age of Course Design, a period roughly bounded by the two World Wars that produced an outsized number of American masterpieces. Starting in 1924, the Indiana native laid out more than 250 courses across the Midwest, including the celebrated Woodland CC in Carmel, Indiana; The Northwood Club in Dallas, Texas, host of the 1952 U.S. Open; and The Summit Course, the original 18 at the Shanty Creek Resort in northern Michigan. He was a founding member of the American Society of Golf Course Architects (ASGCA), in 1947 — and a member of the Indiana Basketball Hall of Fame.

“Ross was great but he can’t compete with Bill Diddel from a basketball perspective,” says Jason Straka, with a wry smile. He is a partner with Fry/Straka and will serve as ASGCA president starting in fall 2021. “In a very real way, Ross and Diddel collaborated at Kenwood. The land Ross chose here, for what became the Kendale Course, is absolutely perfect for golf — just the right amount of roll, with some extraordinary vistas.

“Diddel did the rest. The greens he created here are quite good, but like so many putting surfaces from the Golden Age they had gotten smaller over time. I mean that literally: Putting greens tend to shrink over the course of decades, due to careless mowing habits. But I also mean that figuratively: Because green speeds were so much slower in the 1930s, steeper slopes were perfectly practical as hole locations. As modern bentgrass and maintenance allowed for faster and faster greens, those formerly ‘cuppable’ areas just weren’t cuppable any more.”

Straka expanded all 18 putting surfaces to their original dimensions, after first using LIDAR technology to map the original contours, down to 1/10th of an inch. Then, using Diddel’s original greens drawings, he proportionally adapted those steeper contours to work with modern green speeds.

“The 9th at Kendale used to have just three hole locations. Three!” Straka explains. “Most greens have a dozen or more to use in a 2-week rotation. Today the 9th can accommodate at least 12 places to cut a cup. Most of the members at Kenwood don’t even remember the pin placements we’ve brought back into play. The old-timers do — but the slopes had become so severe, they hadn’t played to those hole locations in 30 or 40 years. Now they can.”

Kenwood course superintendent Kent Turner is the primary beneficiary of this newfound flexibility. [His other charge — the shorter, hillier, quirkier Kenview 18 — is slated for renovation in 2024 or ’25.] The greens, tees and fairways on the renovated Kendale Course have all been outfitted with state-of-the-art drainage capabilities. Straka and crews from Wadsworth Construction also rebuilt and restored all 77 bunkers, according to Diddel’s original plans, making them deeper and more penal but also more consistent.

“Before, you might be in three different bunkers and have to deal with three different sand conditions,” Turner says. “They had all been rebuilt in different ways, decades apart. Now they all play the same and boy, do they look great. Very dramatic.”

Yet the most critical agronomic/aesthetic improvement at Kenwood CC likely stems from Straka’s removal of more than 1,000 sweet gum, oak and spruce trees. This ever-proliferating forest had, over the course of 85 years, obstructed or otherwise compromised lines of play in ways Diddel never anticipated. The trees also shaded rough areas and competed for nutrients with surrounding turf, severely compromising that turf, for decades.

The tree-clearing immediately transformed the Kendale’s rough areas from a source of complaint to a point of pride. It also freed Straka to widen fairway corridors and bring fairway bunkers back into the line of play — an act that revealed still more Golden Age details from Mr. Diddel.

“It was not unlike an archaeological dig,” Straka says. “With wider fairways, you can tuck a pin behind a greenside bunker and really change the way these holes play. Those restored hole locations change where you need to be in the fairway, as well. That’s what Diddel had designed — but all that nuance had been lost. Same thing around the greens: When you lose pin positions, so much of the strategic aspect is lost. We feel as if we’ve brought it all back.

“And when we removed all those trees, we uncovered something else: Some of the best vistas I’ve seen on any golf course in Ohio — vistas Ross surely noticed when he picked out this property.”

The brain trust behind the Kenwood renovations could not have come better prepared. Turner is one of only four superintendents ever to preside at the club. No one understands the soil, the growing and climatic conditions better. Straka is an Ohio native whose firm is considered among the industry’s leading interpreters of Golden Age design. Even its original work — including 2019 U.S. Open and 2025 Women’s Open site Erin Hills, the Wisconsin design completed with former partner Michael Hurdzan and architecture historian Ron Whitten — exudes an authentic, vintage aesthetic.

Petrick, for his part, had arrived directly from Coldstream CC, a private club across town. But he first traveled to Ohio from Baltimore Country Club, where he was party to the renovation of A.W. Tillinghast’s celebrated Five Farms course.

“There’s no such thing as a lucky renovation project,” Petrick says. “There are so many moving parts. To have reinvested so substantially in the course, to have Kent and Jason hit such a home run — it’s just a very good feeling, not only for the management team here but for the members, too. It also makes it easier to go back to the members in two years and say, ‘Hey, it’s time to reinvest in the Kenview Course.’ You know what else makes that discussion easier? A waiting list that isn’t getting any shorter.”

Kenwood CC is an historic, private country club located in Cincinnati, Ohio. Kenwood was formed in 1930. Today, KCC’s annual operating budget is over $14 million. KCC is considered to be one of the finest country clubs in the Midwest and offers 36 holes of golf, along with tennis, paddle tennis, fitness center, resort-style swim complex and a graciously appointed clubhouse. For more information, please contact Seana Hue, Director of Communications at KCC, at shue@kenwoodcc.com or 513.527.3597.