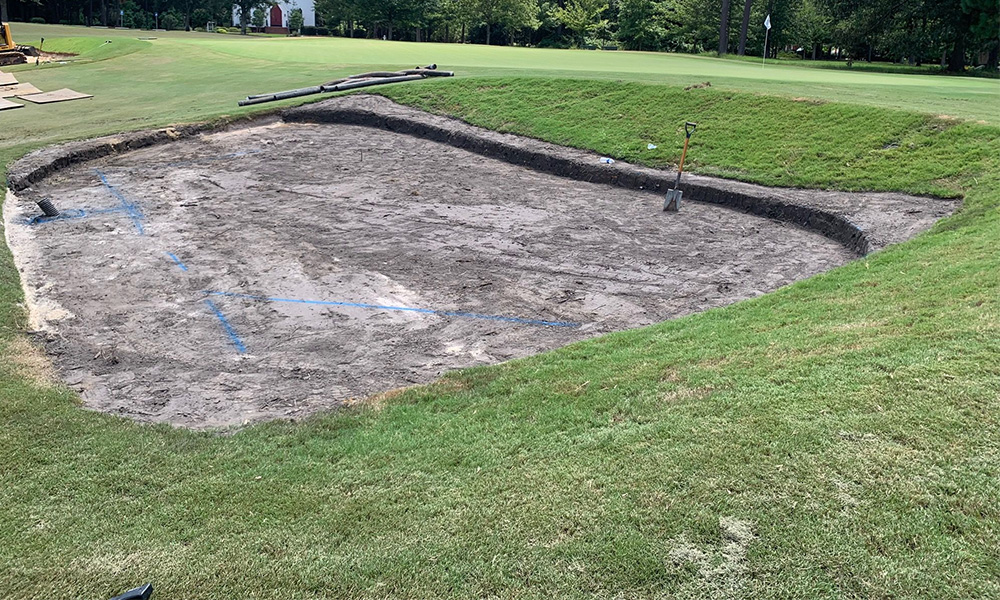 The Kinderlou Forest course in south Georgia is in the middle of a project to install the Capillary Bunkers liner system in a quest to make better use of its course maintenance labor resource.

Designed by the firm of Love Golf Design, run by PGA Tour legend Davis Love III, and opened in 2004, Kinderlou Forest is a semi-private course. Part of a substantial real estate development, the course has 250 members, about half of whom live on the property, and is also open to the public. The course played host to the Web.com Tour every year from 2008-2016, and is the venue for the Korn Ferry Tour’s qualifying school this year.

“The bunkers were originally designed to have flat bottoms with turf rolling down the sides,” explains superintendent Heath Allen. “But the course is about eighteen years old, and the bunkers had not been touched in that time, so we have started to see a lot of erosion when we have a big rain event.” The course has a total of 84 bunkers, the majority of which are found on the more open front nine – the tree-lined back nine has fewer, bigger bunkers.

Allen has been at the course for sixteen of its eighteen years. “In the last five to eight years, we’ve noticed a lot of washouts and erosion. The first few years I was here, we’d have big rains and minimal impacts, but recently, it has got a lot worse,” he says. “We were spending more labor on bunkers than on any other part of the golf course – even greens. That didn’t seem right to me.”

Allen started looking around at bunker liner products. “I saw the Capillary Bunkers system at the GCSAA show in 2020, and I was very impressed,” he explains. “The biggest issue is that we maintain our bunkers using machines. I felt that if we used a fabric liner, and it snagged on the machines, we were going to spend a lot of time and money repairing it. We want to do this one time and not have to worry about going back in to replace anything. And the Capillary system is very easy to install – there are very few restrictions about suitable weather, or time of day, and so on.”

Georgia-based contractor Pristine Golf started work on the project in July. “We ran into a few issues getting started – the bunkers were not properly flat-bottomed any more,” says Allen. We hauled a lot of dirt in to raise the bottoms and get them flattened out.”

Twelve holes are done, and Allen hopes to be finished by the end of October, though the Korn Ferry qualifying school forced work to be paused for a while.

We have had three rain events over two inches since they started, and I’ve been very impressed. No washing out, no algae,” he says. “We do get a lot of algae, and it has been getting worse, so we are installing the Capillary Wash Box, which will allow us to pressure wash the sand and extend its lifespan. On over half the bunkers, we’d have to go in and scrape off the top layer of sand after a rain event, because it was contaminated. After we’re finished, we’ll be able to pressure wash those bunkers, which will save time and money.”