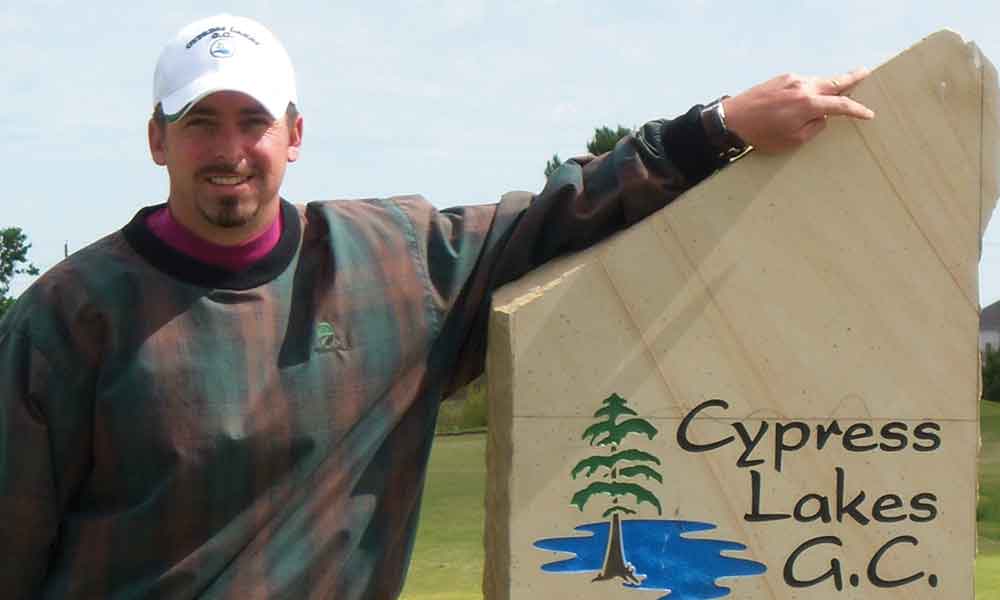 Most of my life I have worked hard at whatever I did. I was always raised with good values and the believe that “if you are going to do something, do it right or don’t do it at all.”…

For most of my life, I have worked hard at whatever I did. I was always raised with good values and the belief that “if you are going to do something, do it right or don’t do it at all.” With that being said, at a young junior high age, I began working part-time jobs, doing yards in the subdivision, cleaning cars, Christmas tree loading, or whatever I could do to stay busy; as being bored is a truly lonely profession!

Around the age of twelve, I was invited to play in a Family Reunion Golf Tournament. I reluctantly agreed but had never really swung a club. Then, after the round, much to my surprise I had won the damn thing, shooting 82!! Needless to say, after that trophy was put in my hand I was hooked.

It wasn’t the trophy, but the fact that I did something and did it well. Now all of a sudden Raveneaux Country Club, the same club that my mom’s company had constructed, held a real interest in me. I had access to the greens and they became my home away from home.

I never really played, but literally practiced until my hands were so sore that I couldn’t hit another shot. Up until that time moto-cross racing and percussion were my hobbies; although I must admit, to this day, percussion is still in my blood, and I still play with a group of friends.

As I moved along in this profession, I had never considered years ago that I would begin receiving praise on my golf game, especially from many of the club members.

Hitting the mini-tours to pave the way to becoming a “professional golfer” became a repetitious vision in my mind ~ after all, isn’t part of life having visions of grandeur?

Of course, reality hit when I realized that financial backing was a big hurdle or, the only hurdle as I thought at the time!

I approached my father and was fortunate he was able to make my dream a reality, or again, as I thought at the time.

Related: The 7 Winds of Change

So, off I ran to play side by side with the likes of J.L. Lewis, Tim Herron, and Bob Estes just to name a few. Some may think this would be a glamorous lifestyle but believe me, it is a job, and making a check every week is easier said than done.

I know there are not many Willy Plowman’s in the world; he has been my mentor and friend. I cherish our relationship, probably more so since my father left this earth way too soon.

I know there is one person I can count on if there are any questions in work or in life.

Cypress Lakes, always a part of my life, has extremely sloped banks on our lakes, as you can see, so algae has not become much of an issue.

This will change over time as the shore line becomes more and more shallow.

It is not only costly but exerting mentally and physically, and plays havoc with your emotions and I might add, your pocket book if you are not a big winner.

Having taken all the “fun” I could stand, I ran back home to running a register in a pro shop and giving lessons, at least making the wife happy! Then, during this time, I became pals with Willy Plowman, the Superintendent of the new Cypress Lake Golf Club in Cypress, Texas. One day Willy approached me and asked if I had ever considered growing grass for a living, another profession I had never considered!

Here I go again. I gave it a shot and have never looked back. I owe everything to Willy Plowman for giving me a chance and teaching me the right way and I might add, the wrong way of doing things in this “growing grass” business. I learned so much during the five and one-half years as his assistant at Cypress Lakes.

I was postulated away for a few years to Pine Forest Country Club. However, just recently Willy was offered the Superintendent position at Willow Fork Country Club and has since departed Cypress Lakes, but not before calling me and offering me the chance to take his place. I graciously accepted, and am back home where I began to “grow grass.”

But, in dealing with lakes on a golf course, the only trick I have ever seen that is a sure fire way of keeping down algae is steep slope from sod line to water line.

As your lake banks become more and more shallow over time, it allows for more sunlight to reach the bottom. In my career, I have seen many attempts to keep algae down with lake bubblers, fountains even something called the bug box.

These bugs are self-contained in a pellet, then released as the pellet dissolves in water. These microscopic bugs then go to work. I have seen some results with this application but only in isolated bodies of water.

Although many people do not like the look of pond dyes, I believe if needed to prevent sunlight to shallow bottomed lakes, it is an easy and affordable practice to cut down on some of your algae issues. Dredging lake banks is another option, but very expensive to do. I do know of an STGCSA chapter member who swears that tilapia, the fish we eat, works on all types of algae.

I must say that all the times I have played golf at his course I have never seen any forms of algae, so it may just be the answer? I believe though, the only real answer to keeping algae away is the incline of your lake banks.

To sum it all up I have had a lot going on in my 38 years. I feel blessed that things have turned out pretty good and I look forward to the rest of my ride.

I have come to realize that things happen for a reason, whether or not you want them to. So sit tight and don’t take life too seriously.

Work hard, be dedicated, honest, and compassionate, but most of all, share your knowledge to help someone else “get a life” and you will be rewarded.

As I continued my education and played on the high school golf team, I never gave golf or the golfing business thought as a profession I would gravitate to. Then, after high school, I packed my things and headed to College Station (whoop!). Within a couple of years, I was totally infatuated with a young lady in Katy, Texas, and found it hard on both of us to be apart. As young love over-rides all else, I moved back to Houston to marry my now bride of eleven years.

Needing to put food on the table as a married man, I got a job as Bag Staff Manager at Raveneaux Country Club (it always helps to know people, and to maintain your connections). Within a year I was introduced to the program as a Golf Course Professionals Assistant.

On behalf of the STGCSA and all of our fellow brothers in grass growing, and all things that go with that, we appreciate The Golf Course Trades Magazine for recognizing our jobs, how things are done, the many different ideas and solutions to our jobs, and what kind of demands are on all Superintendents shoulders.

I also want to thank The Golf Course Trades and all that it involves.

A Path with Heart
Never a Dull Moment
To Top