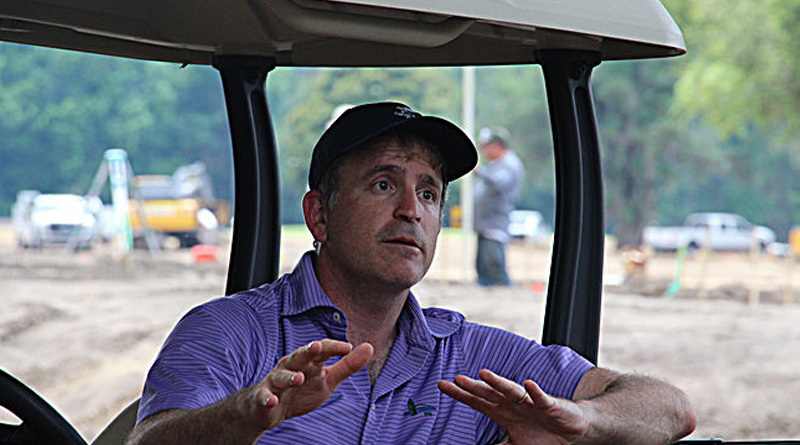 “Reprinted with permission by The Pilot of Southern Pines.”

He may not be a household name, but Pinehurst-based golf architect Rich Mandell has built an impressive portfolio of work over the last quarter century. Described as the ‘consummate professional,’ Mandell was recently named 2017 Golf Architect of the Year by BoardRoom Magazine.

“The BoardRoom Awards are the only awards in the private club industry that recognize private clubs’ business partners, and every year we see increasing innovation, achievement, a vision and dedication from BoardRoom Award recipients,” said John Fornaro, publisher of BoardRoom Magazine, the official publication for the Association of Private Club Directors (APCD) and their clubs. “And of course, private clubs are the beneficiary of outstanding work. Clearly each and every one of them is the leader in their respective field and we’re absolutely delighted to recognize their contributions.”

BoardRoom magazine is the only publication of its kind that is designed to educate the boards of directors, owners, general managers and department heads of private golf, city, yacht, tennis and country clubs about issues concerning all aspects of the club, golf course management and operations. BoardRoom’s Excellence in Achievement are the only awards in the private club industry that recognize private clubs’ business partners.

Since forming his company, Richard Mandell Golf Architecture, in 1992, he has worked on more than 70 golf course projects, including restoration of several Donald Ross courses. Mandell is currently wrapping up construction of one of only a handful of new construction projects in the United States, a municipal course in the city of Edina, Minnesota.

Another key project he is currently building is a tee and fairway redesign for Keowee Golf & Country Club in Salem, South Carolina, where he redesigned the greens complexes back in 2006. Mandell will also break ground this May on a bunker restoration project at Robert Trent Jones’ Tanglewood Golf Park’s championship course in collaboration with the office of RTJ II.

Mandell’s philosophy of golf architecture is to balance inspiration with practicality, and weaves in the four tenets of tradition, enjoyment, character and passion into each of his projects.

“The golf business went through a recession in 2008, but we were not affected. Our business has gotten better every year because, frankly, the work we are doing is the way the golf business should have been going,” Mandell said. “People spent a lot of money on aesthetics and conditioning of the course, but there were not focused on fun, enjoyment and strategy.”

“It is pretty easy to make a course difficult, and the trend was the more difficult the better. That was a trend we never followed,” he added. “We want our designs to be challenging but not difficult. ‘Difficult’ is one of the factors why the golf industry is declining.”

In particular he avoids course design that penalizes the golfer for poor shots, but does not challenge the play strategically. For example, he will place a hazard in the middle of the fairway — rather than down the sides — which gives a golfer four different options for where to aim their ball.

“We give them more choices. You are rewarded for taking a certain route on the golf course instead of penalized to stay out of trouble,” he said.

“People are talking about short courses and all of the sudden they are in vogue. But an 18-hole course was never meant to be played in an hour and a half. It should be three to three and half hours, but because of the trend towards difficulty, it started to become five-hour rounds,” he said.

Mandell said he has the opportunity to be more creative when building new or renovating a course, versus restoration.

“With restoration it is almost like you are a project manager for the original golf architect. At Bacon Park, Donald Ross had done some pretty detailed sketches. We walked the site and looked at how to implement them, but we have to be careful where we put the hazards. What was challenging 100 years ago could now just be a penalty,” he said.

Another Donald Ross-designed restoration project he unveiled this year was the Country Club of Asheville. This was the fourth project that Mandell completed for Raleigh-based McConnell Golf, and garnered him the honorable mention by Golf Inc.