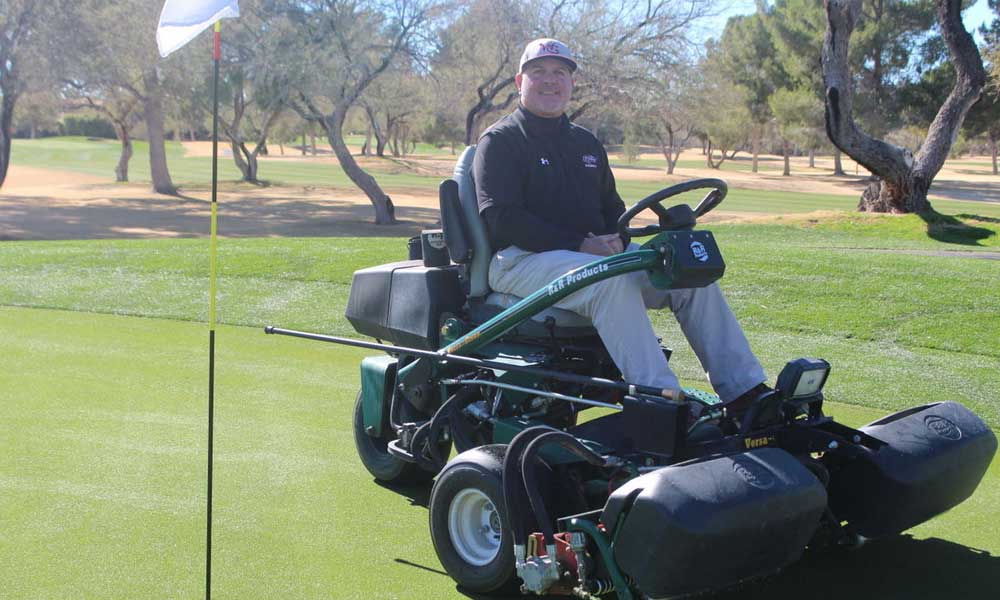 Even after 21 years, John Rojahn plans on keeping Desert Hills Golf Club’s greens green and its fairways fair well into the future.

Rojahn played high school golf and was a member of the boys golf team at Sahuarita High School that won three-consecutive state titles under then-coach Steve Keller in the early 1980s.

He then dabbled with collegiate golf, playing on the team for a year before discovering what would become his life’s passion ‚ golf course maintenance.

Rojahn’s first cup of coffee in the maintenance world was at the Blanchard Golf Course on the grounds of Tucson’s Davis-Monthan Air Force Base, where he worked summers.

Rojahn ‚ who graduated with a degree in journalism ‚ loved working long hours outdoors and got a job at Desert Hills in 1994 after a friend told him about an opening.

“I was working in Tucson when the position became available here,” Rojahn recalled. “I lived in Tucson at the time and I came down here and haven’t left since. I started at the bottom, about as low as you can get, and worked my way up.”

Rojahn’s career at the course is an American success story, moving up the ranks as an irrigation tech and assistant supervisor before replacing Brad Quiring as the course’s supervisor in 2001.

He remembers having to learn the ropes about all things turf on the fly, with little formal education in the art of golf course maintenance or agronomy.

“I consider myself pretty lucky,” Rojahn said. “I knew when I started working part-time jobs in college that I was going to be someone who needed to work outside. I didn’t have a lot of experience when I first started, so I kind of learned it all on the job. It’s meant a lot to me, because I’ve kind of worked and learned everything I know about the property just from being here so long and understanding the soils on the course.”

Rojahn and his crew of eight full-time groundskeepers are tasked with keeping the 18-hole course in impeccable condition, a daunting task considering Arizona’s scorching hot summers and freezing winter temperatures.

He said keeping the course up to the high standard expected from membership can be difficult, but that their hard work is worth it when they receive compliments for their efforts.

“I think people are more in tune about having the course look really nice and play really well,” Rojahn said. “It’s a challenge, but people really want the course to look nice, so that’s what we work tirelessly to do.”

Rojahn said each member of his team handles a multitude of tasks, including fixing leaky pipes and sprinklers, mowing greens and fairways, and setting the tee and hole locations.

He said their success comes from the group’s loyalty to the course, having worked together so long.

“I’m super proud of how we’ve kept it like a family,” Rojahn said. “We’re very close-knit and look out for each other, and I think that makes for a really good work environment.”

John Esser, who has worked with Rojahn for 12 years combined in two stints at Desert Hills, believes Rojahn’s ability to motivate his employees sets him apart from other supervisors Esser has worked with.

“John’s a pretty dedicated guy,” Esser said. “He communicates really well and treats everybody equally. He’s a pretty good listener too, which is a great quality to have as a leader.”

Rojahn’s team received the GEM (Golf Endorsed by Women) Award in January 2015 from the Arizona Women’s Golf Association for the third year in a row for its efforts to get women into the game.

Rojahn said he’s honored by the group’s appreciation of his team and their loyalty to the course, which opened in 1978.

“The Women’s Golf Association here is outstanding,” Rojahn said. “They’ve always been really nice to me and my staff, and they appreciate how we go out of our way to make the course friendlier for them.”

Golf course maintenance is far from the only job Rojahn takes on every day, however, as he also coaches Walden Grove High School’s junior varsity baseball team.

Rojahn ‚ who is entering his second year in that capacity ‚ said he enjoys coaching the next generation of athletes, including his son Zach, who plays on the golf and baseball teams at the school.

“Teaching kids how to get their life going in the right direction is great,” Rojahn said. “We all like baseball, but helping them out in that way is big for me.”

Teaching comes naturally to Rojahn and his wife Karin, who has worked as a science teacher at Sahuarita and Walden Grove high schools.

Rojahn doesn’t plan on leaving either of his jobs anytime soon.

“I have a daughter (Annie) in college right now. She’s a freshman at Central Washington University. So I don’t really have a timetable on it,” Rojahn said. “I’m going to keep showing up and working as long as they want me here.”