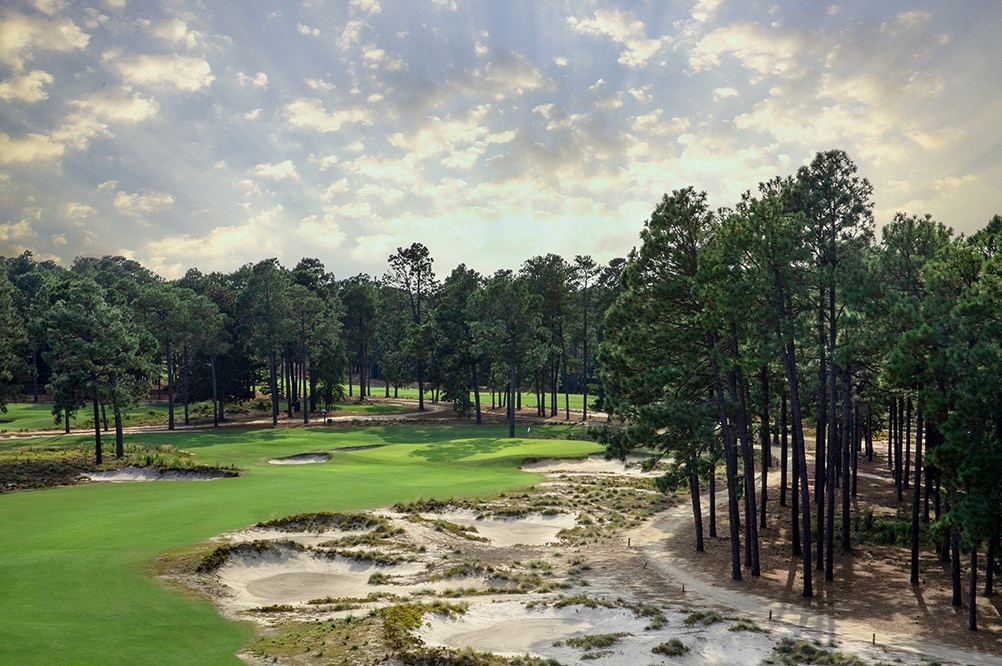 At this point, it is pretty clear… the crew at Pinehurst will tackle anything.

In 2010-2011, Pinehurst No. 2 went through a $2.5 million renovation that was nothing short of revolutionary. Ben Crenshaw and Bill Coore (Austin, Texas-based Coore & Crenshaw Inc.) took on the task of restoring the original elements of the 107-year-old Donald Ross-designed course. With this vision and a lot of hard work from Pinehurst Director of Grounds and Golf Course Maintenance, Bob Farren and his crew, Pinehurst No. 2 have been reinvented as the type of course Donald Ross always intended it to be.

Today defined by wide fairways, firm and fast turf, and natural roughs of wiregrass, hardpan sand, and pine needles, Pinehurst No. 2 has a distinctively different look than the over-manicured, formal feel it had slowly acquired with the passage of years. As part of the dramatic makeover, more than 40 acres of turf were removed, bunkers were given natural edges, and irrigation that once required 1100 irrigation heads to serve approximately 84 acres was reduced to roughly 45 acres and some 450 irrigation heads.

Although this dramatic transformation was undertaken to better serve all who love and play the course, it has also been timed to showcase the changes during the history-making event set to unfold this month at Pinehurst. Now, only days away from hosting the US Open (June 12-15) followed by the US Women’s Open (June 19-22) as the first-ever, back-to-back championship tournaments contested on the same course, USGA Executive Director Mike Davis describes what is about to happen at Pinehurst No. 2 as, “a challenging… but … great test of golf.”

Pinehurst No. 2: Changes Both Before and After the Back-to-Back Championships

For all that has already been done to change the face of Pinehurst No. 2, one significant renovation is actually not scheduled to occur until after the two weeks of consecutive USGA championships have passed.

In 2012, Pinehurst successfully converted the greens on its No. 1 course to Champion ultradwarf bermudagrass. In so doing, they enhanced playing conditions longer into the year, and especially during the long months of North Carolina’s hot summers.

In 2013, courses No. 3 and No. 8, along with Pinehurst’s Thistle Dhu putting course, were also converted to this hearty bermudagrass, known for its dense and aggressive lateral growth. The legendary No. 2 is scheduled to be converted in July of this year, following the two tournaments. For Pinehurst No. 2, interruptions will be minimal, with the course reopening for play in September. Sprigging the grass and using the no-till process shortens downtime, reduces labor, and better protects the integrity of the symbiotic relationship between the soil surface and underlying microorganisms. With no need to excavate, the contours of the greens are also protected.

Champion ultra dwarf bermudagrass tolerates mowing as low as 0.100 of an inch, provides a high-quality putting surface for daily use and can easily be fine-tuned for championship conditions. More than 500 courses across the southeastern US, including the Atlanta Athletic Club, East Lake Golf Club, and Quail Hollow Club in Charlotte, are now successfully using Champion ultradwarf bermudagrass and benefiting from the high-density, smooth putting surfaces and temperature tolerance it affords.

What Will Be Different About Pinehurst No 2 in Tournament Week Two Compared to Week One?

Common sense nudges you to think it will be impossible for playing conditions on Pinehurst No. 2, during the week of June 19-22, to match course conditions from the previous week. Yet both the USGA and Pinehurst Director of Grounds and Golf Course Maintenance, Bob Farren, say otherwise.

The intent of the USGA is that the course will play the same in each tournament while making small allowances for differences in the men’s and the women’s games. For the men, the course will be set to approximately 7,560 yards and to approximately 6,650 yards for the women. Typically, a par 72 course, par will be 70 for both events. The course rating for the men will be 76.0, with a slope rating of 147. For the women, the course rating will be 78.1 with a slope of 145.

US Women’s Open Executive Director Ben Kimball, says even the pin placements will be similar from one tournament to the next, with the objective of placing the pins in approximately the same quadrant of the greens in each corresponding round of the two events. Explains Kimball, “We want to give them the same look from Week 1 to Week 2.”

Although the greens will be maintained at the same speed for both tournaments, the intent is to have them be slightly softer during the Women’s Open, offsetting the fact that most women don’t spin the ball as much as men typically do. Making the greens softer in the second week –even if only slightly–is an easier objective than trying to accomplish that in week one, and this, says the USGA, is the primary reason the men will play first and the women will not play until the second week. Farren, remembering conditions at Pinehurst No. 2, during the 1999 and 2005 US Open Championships, says that in hindsight he recognizes if the plan in either of those years had called for back-to-back championship tournaments, the course could have handled it.

The Sandhills are Ready

The North Carolina Sandhills, the geographic home to Pinehurst, are also home to some 2800 hotel rooms, along with many private homes and condos that will be called into action to accommodate the thousands of fans expected for the two-week event. On peak days, the gallery is anticipated to reach 55,000 spectators per day during the men’s tournament and 25,000 per day during the women’s tournament. With every hotel room in Pinehurst, Southern Pines and Aberdeen booked well in advance, fans and media in need of housing will spill over into neighboring counties and larger cities including Fayetteville and Raleigh, both approximately an hour’s drive from Pinehurst.

Yet, Pinehurst will handle it all in stride and host their guests with true southern hospitality. Known as America’s cradle of golf, the courses of Pinehurst have hosted more golf championships than any other venue in America, with the US Open, PGA Championship, PGA Tour Championship, and Ryder Cup Matches, among the most noteworthy.

Although USGA tournament volunteers come from all over the country, many of the more than 6000 unpaid staffers working the events will be local residents. Moreover, roughly seventy percent of the volunteers working during the first week are working again during the second week. Clearly, North Carolina’s Sandhills residents love their golf.

With this much preparation, experience, and passion for the game, you have to wonder, what if anything could go wrong. Weather is a concern with any tournament. Delays that force plays over into Monday, would impede early week practice rounds for the Women’s Open. Although inclement weather sometimes forces delays, tournament officials typically do an excellent job, double loading tee times, with players teeing off both 1 and 10 if needed to keep a tournament on schedule to wrap on Sunday afternoon.

The bigger concern regarding a delay arises from the USGA own rules regarding the US Open. In the event there is no outright winner on Sunday afternoon in the men’s tournament, all players tied for the lead at the end of 72 holes of play would meet again on Monday for a full 18-hole playoff. Since 1990, the rules of the men’s US Open then follow the 18-hole playoff format with a sudden-death playoff should that need arise.

The US Open has been contested every year since 1901, except in 1917 and 1918 (World War I) and again during World War II when it was not played from 1942 through 1945. Thirty-three times, the US Open has been settled in a playoff–that’s slightly less than once in every three and a half times it is played.

Most fans of the game recall the playoff between Rocco Mediate and Tiger Woods; the last time a US Open went to a playoff. Contested at Torrey Pines, Tiger needed 19 holes to ultimately defeat Rocco on the first sudden-death hole after the playoff 18. Even more important to note is that this memorable finish occurred six years ago, in 2008.

By the law of averages, this year’s US Open at Pinehurst is well overdue to see a Monday playoff. Bob Farren and his team, no doubt, have their fingers crossed that luck will prevail, and the 114th US Open will produce a winner at the end of four rounds. But if it happens and the US Open doesn’t conclude until Monday, you can be sure that Pinehurst and the USGA are ready to meet the challenge.

_____________________________________
Linda Parker has been writing professionally since the 1980s. With clients in finance, sports, technology, change enablement, resorts, and nonprofit global initiatives, Linda helps organizations communicate their stories in meaningful ways to the people they most want to reach. She has authored, ghostwritten or contributed to more than a dozen nonfiction books. You can reach her at: info@lindaparkerbooks.com.