Wheeling westward across the country to cover the U.S. Open afforded me the chance to play golf at various stops along the way. Call it an impromptu version of the Great Golf Road Trip, this time from the foothills of the Adirondack Mountains all the way to the kettle moraines and sandy hills of Wisconsin. I-90 may be a snowy wasteland reminiscent of Antarctica in winter, but in high summer the golf is sublime, and the four days before I took my seat in the U.S. Open media center featured strategic masterpieces and timeless golf history…and that’s exactly what a truly great golf trip is all about.

Roc and the Pheasant – Shortsville, NY

Formerly known as “Winged Pheasant,” temporarily called “The Pheasant,” and en route to being re-branded as “The Roc and The Pheasant,” (confused yet?) this 27-hole facility just outside Rochester is in the midst of exciting changes, thanks mainly to developer/designer/superintendent Phil Furfari. The original 18 holes, “The Pheasant,” (designed by Phil’s Father Roc Furfari) are cramped into a tightly wooded, roughly square parcel. But the new nine, “The Roc,” is designed completely by Phil Furfari and a cadre of his associates, including his brother, Peter – “Phil and Friends,” as they’re known.

Watching the progression of the project through its construction, it’s remarkable to see this homespun, DIY ethos bear fruit. Most holes are wide, with superb undulations. There are several excellent greens, and the routing explores the most interesting parts of a rolling property blending woodlands, ravines, and streams. Two of the best holes – back-to-back par-5s at three and four – need their fairways shifted to the right so that the specimen trees don’t interfere with the line of play. Three will be especially good once they also grass over a rock short of the green, and play it as a fascinating, old school chocolate drop, making for all kinds of bounces and plenty of greenside adventure.

As an aside, the course occasionally keeps a pen of emus on premises. Apparently emu burgers are quite savory and low-fat, and “emu oil” – whatever that is – has certain health benefits. A cross between an ostrich and a Velociraptor, (though anthropologists claim they are more closely related to the T-Rex), the emus themselves are among the sketchiest-looking creatures on God’s Green Earth; they look at you as though calculating which piece of you to eat first. Still, they’re harmless, although lightning fast if they ever get loose, so rounding them up is tough if they escape. What a site that has to be – chasing emus around a golf course!

Canterbury is Cleveland’s pin in the World’s Golf Atlas, critically important both architecturally and historically. Designed by Herbert Strong in 1922 (whose other work includes major championship venues Engineers Club and Inwood) Canterbury hosted two U.S. Opens in 1940 and 1946, won in playoffs by Lawson Little and Lloyd Mangrum respectively. Little beat two-time U.S Open champion Gene Sarazen, and Mangrum outlasted Byron Nelson and Vic Ghezzi in 36 playoff holes, and that’s despite Mangrum being wounded three times during World War II. He got shot at both Normandy and at the Battle of the Bulge, then he had a jeep overturn on him. Golf seemed much easier after that.

Then in 1973 Jack Nicklaus broke Ben Hogan’s major championship record with his runaway, 7-shot victory in the PGA Championship. That record stood until Rory McIlroy shattered it at Kiawah Island in 2012.

Canterbury is rightly proud of its venerable history, and a tour of the clubhouse had me in as much reverential awe as when I toured Colonial and got to sit near Ben Hogan’s locker. Walking through Canterbury’s stately halls is like being in church, and at every corner there’s another golf Pieta. Johnny Goodman, Ky Laffoon, Gene Sarazen, Olin Dutra, Johnny Farrell, Nelson, Hogan: they’re all there, looking like movie stars. For a moment I almost mistook Tony Manero for Howard Hughes.
Bruce Hepner of Renaissance Golf oversaw a renovation that was completed just last year to widespread acclaim.

It was three hours the wrong way, but well worth it. Instead of heading due west on I-90, I detoured south to Dayton, stopping only to watch my beloved Pittsburgh Penguins win the Stanley Cup by finishing off the Nashville Predators.

Trail’s end was Moraine Country Club, and I arrived at 4:45…A.M. That’s because I eschewed sleep, driving through the night to make my 6:35 a.m. tee time.

I played poorly as a result – I was so exhausted, I actually whiffed with a 3-wood on one hole – but not even the humiliation of missing the ball completely could dampen the joy I felt marveling at the majesty of Moraine’s wild terrain, and architect Keith Foster’s sparkling renovation work on this 1930 Alex Findlay design.

Both of Moraine’s nines climb from the lower portion of the course, up the steep ridge that towers over the landscape, then cascade back down in visually arresting fashion. Each side has a crescendo. The front features a steep, winding ascent at the par-5 fourth hole; then the tiny, but gorgeous par-3 fifth is the payoff, sitting serenely, like an emerald in a lacquer box, surrounded by golden shafts of gently swaying fescue.

In the dazzling morning sunshine it took on an almost holy glow. 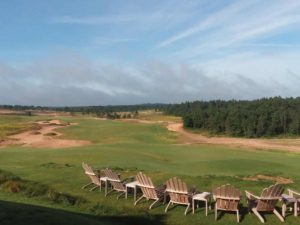 Six and seven descend, each ending at a green perched precariously on a ledge.

The back is equally exciting, peaking at the par-3 15th – tiny but dangerous – and the all-world 16th, with its green surrounded on three sides by sandy chasms.

Moraine is the site of Byron Nelson’s 1945 PGA Championship victory, the ninth of his 11 consecutive wins, his fifth and final major and his second PGA.

Sand Valley is the hot new resort by the uber-cool developer Mike Kaiser. Proving that where ever you find sand, you can build a world-class golf course, Kaiser, who developed the Streamsong and Bandon Dunes Resorts has now brought his magic to the Midwest. Right now you can play a course from Coore and Crenshaw, while David McKay Kidd designs something called “Mammoth Dunes,” which opens next year.

Typical of Coore and Crenshaw, Sand Valley is both minimalist and asymmetric, two attributes that, happily, are on the rise in golf design. There are five par-5s and five par-3s, for a 35-37 routing.

“Bill [Coore] knows we’re not concerned with the balance of par or convention,” explained Mike Jr., Kaiser’s son. “He’s focused entirely on finding the best golf holes regardless of par and where they appear on the scorecard.” 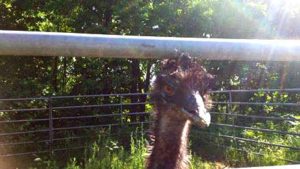 With several long ridges and valleys, Coore and Crenshaw chose to use the course’s par-3s to link from one ridge to another. Most players love the Redanish third, the drop-shot fifth, and the marvelous punchbowl green at 17. Other beguiling strategies include split fairways, diagonal angles of attack, and large undulating greens with devilish fall-offs, including false fronts, false sides, and greens that slope away from the player.

And by the way, the emus had no comment.