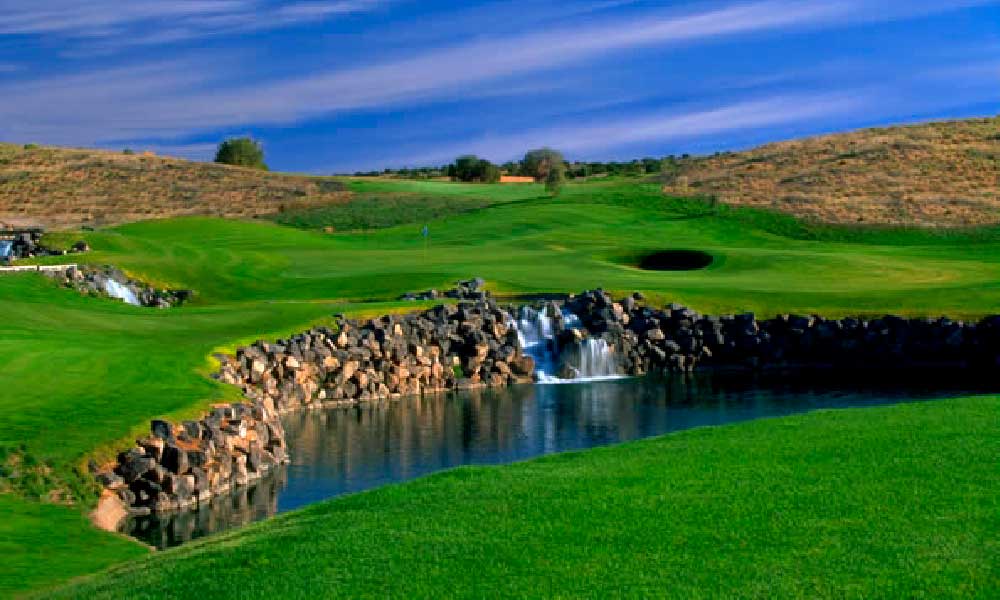 Some 15 miles north of Albuquerque on rolling desert at the base of the Sandia Mountains, the sacred land of the Santa Ana Pueblo is home to two striking, and very different, golf courses, each noted for their beauty and challenge.

The courses – Twin Warriors Golf Club and Santa Ana Golf Club – are set on acreage surrounded by the grandeur of the Jemez Mountains to the west, the Sangre de Cristos to the north and the Sandia Mountains immediately east, and are woven through sand, cactus, scrub brush and rock. With 45 holes of golf, the two venues, which serve as amenities of the tribal-owned Hyatt Regency Tamaya Resort, offer players plenty of variety and tests.

And because the courses of the Santa Ana Pueblo are so close to the mountains of northern New Mexico, including 10,000-foot-high Sandia Peak, the area is one of the few places in America where you can ski in the morning and play golf in the afternoon (the average December-January high temperatures are in the upper 40s).

The people of Santa Ana believe the Twin Warriors showed them the path to their “Upper World” along the banks of the Rio Grande. The golf course named after the Twin Warriors is a worthy tribute to those icons.

Routed on ridges dotted with Juniper and Pinon Pine and around 20 ancient cultural sites of the natives’ previous habitation and activity, Twin Warriors is one of the top courses in New Mexico. Designed by Gary Panks, the track opened in 2001 and was the Land of Enchantment’s first high-desert destination course.

The contrast of reds and browns of the desert and the lush green knolls, mounds, fairways and greens makes Twin Warriors a Southwestern golf experience to cherish and enjoy. Deep, winding arroyos and eroded land features, along with the sacred butte known as Tuyuna or “Snakehead” Mesa, add to the vistas and the par-72 challenge, which stretches a whopping 7,736 yards from the tips where it’s rated 75.4 and sloped at 140.

Five cascading waterfalls flow into a two-acre lake at Twin Warriors’ heart, and an extinct volcano serves as the backdrop for a series of demanding holes made even tougher by the constant wind that whips off the mountains.

With seven par-4s of at least 449 yards (highlighted by the 502-yard third and the 489-yard seventh) and a killer final four-hole stretch, Twin Warriors asks players to bring their best. Twin Warriors’ one-shot holes are also notable. No. 4 is a scenic 197-yard par-3 with a series of waterfalls and the 208-yard ninth plays across a box canyon before rising up to a Redan-style green. And at 244 yards, the 15th –which has an 800-year-old cultural site near its tee – simply overwhelms with its sheer length.

Beginning at No. 15, the home stretch humbles even the best players. The 16th is a 648-yard par-5 that drops steeply from tee to fairway and then works right to left around the Snakehead to a yawning, undulating putting surface.

Bunkers on both sides of the landing area narrow the tee shot on the 401-yard 17th, and the 488-yard par-4 closer moves uphill toward the resort and a well-bunkered green that is three clubs deep. For sightseers, there’s a cave visible from the 16th tee and an old horse corral near the 18th starting gate.

The course’s practice facilities include a huge driving range, two short-game areas, an expansive putting green and a private teaching area and learning center. Twin Warriors Golf Club has been ranked in the top 50 among Golf Digest‘s best 100 public golf courses and hosted both the 2003 and 2009 PGA Professional National Championships. It’s a beauty and beast, unforgettable and fun.

Just a minute nearer to Albuquerque than Twin Warriors are the three nine-hole layouts at Santa Ana Golf Club. Called Tamaya, Cheena and Star, the trio can be combined to play as three different 18-hole, par-72 combinations, the hardest of which is likely the Cheena/Star combo, which is carded at 7,145 yards and sports a rating of 73.0 and a slope of 135 from its back set of four tees.

Designed by Ken Killian and opened in 1990, Santa Ana is much flatter than Twin Warriors, using subtle mounding bordered by native grasses and eight crystal-blue lakes for topographical nuances. The course borders the Rio Grande River and also features some of the most consistently quick and difficult greens in the region. With the wind whipping off the nearby mountains having free rein due to the planar lay of the land, accuracy and course management are essential for success.

Because of its speedy putting surfaces, the strategy at Santa Ana is specific: be real careful where you end up on the greens, because that can determine whether you have a chance to make a birdie or, worse, a two-putt.

The Tamaya nine’s toughest holes are its long par-4s. No. 3 weighs in at 473 yards and the seventh plays 460, venturing left to right around four huge bunkers in the landing area. Then there are its three-shot holes, the 600-yard third and 599-yard fifth, both of which move left, then right, then left again before reaching the green.

The final two holes can make or break your round on the Cheena nine. At 633 yards and uphill on the approach, the par-5 eighth usually plays into the wind as well. But pick up a lost stroke (or two) on the 534-yard par-5 ninth; just make sure to avoid the waterfront and left of the green.

The tougher Star nine involves several blind tee shots to fairways hidden by desert scrub. Star’s real tests come at the 401-yard, par-4 third (uphill and into the wind) and its pair of par-5s – the 594-yard sixth and the 538-yard ninth.

Santa Ana played roughly five shots easier than Twin Warriors during the 2009 PGA Professional National Championship (which it co-hosted). It has been ranked No. 33 nationwide in Golf Digest’s “Top 40 Resort” courses. Though not quite as seductive as its sister course, each 18-hole arrangement mandates total focus.

For information about both Twin Warriors and Santa Ana, visit www.mynewmexicogolf.com.