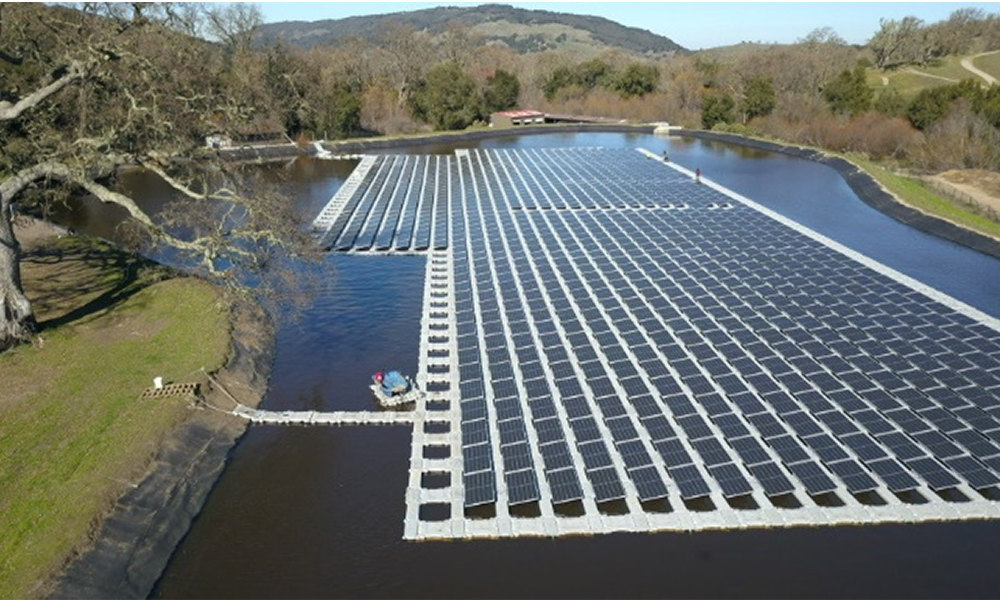 The Santa Lucia Preserve will soon reach another environmental milestone. The completion of a $1.2 million, solar panel installation will provide most of the electricity used by The Preserve Golf Club. The new system will also contribute to the club’s water savings by limiting evaporation.

Forrest Arthur, Chief Operating Officer, and General Manager of the Santa Lucia Preserve Community Services District said the central mission of the community is to “work toward a level of self-sustainability that can last hundreds of years.” He added that “protecting and reinforcing the sustainability” of the expansive 20,000-acre community in Carmel Valley was his primary challenge as well as inspiration.

“Evaporation control is a real sexy by-product of floating solar,” Arthur said. “You’re not only offsetting power use, but you’re shading the water—a finite resource. This win-win concept fits perfectly within our self-sustainability objective at The Preserve.

A test of the panels on a small pond at The Santa Lucia Preserve in 2018 proved successful.  Then the club had to obtain a permit from Monterey County for the first set-up of its kind in the region.

Installed by Pacific Grove-based Applied Solar Energy, the 1,178 panels—which cover the majority of one of the course’s water storage facilities—will provide an estimated 80% of the electricity for the course, comfort stations, and golf clubhouse. The panels sit on pontoons that are tethered to the pond banks and rise and fall with the water level.

Water for drinking and irrigation comes from a series of wells hooked up to underground aquifers, as well as five storage facilities that collect 50 million gallons per year. Under the Santa Lucia Preserve’s guiding principles of low impact development, the floating solar system is preferable to large-scale ground-mounted solar farms, according to Arthur.

The panels are in place and will be fully operational once Pacific Gas & Electric (PG&E) upgrades a transformer and sub-station.

It will likely take a few years before evaporation data is collected and actual water and energy savings are calculated.  Arthur noted that the different turfs on the golf course require varying amounts of water, with cool-season grasses (in the rough) needing more and the warm-season Santa Ana Hybrid Bermuda, which was planted in the fairways in 2016, being more drought tolerant. The Bermuda also goes dormant—changing color from green to white or brown—in cooler temperatures, further reducing water needs.

The Preserve Golf Club, an award-winning Tom Fazio design, is the centerpiece of a private community of only 300 homesites in the scenic coastal mountains east of Carmel-by-the-Sea, Calif.  Residents are devoted to the founders’ mission of habitat conservation, establishing the only community in America with a perpetually endowed nature conservancy. The golf course winds through oaks, redwoods, streams, and the Santa Lucia Mountains.