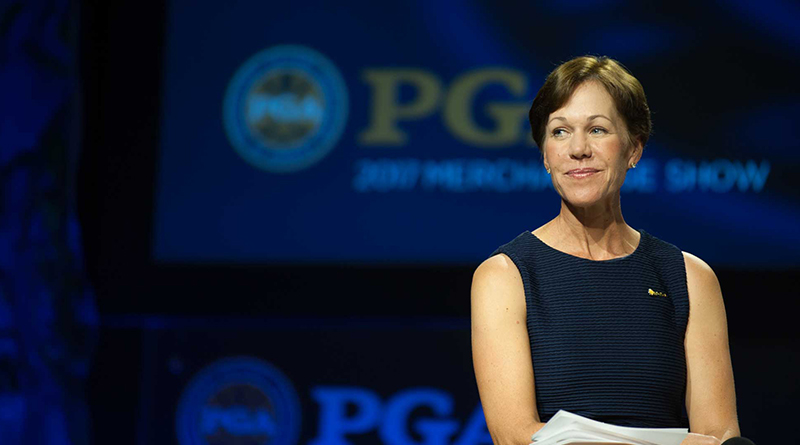 INDIAN WELLS, Calif. (Nov. 9, 2018) –  PGA Master Professional Suzy Whaley was elected the 41st President of the PGA of America today at the Association’s 102nd Annual Meeting. Whaley is PGA Director of Golf at Suzy Whaley Golf in Cromwell, Connecticut; and PGA Director of Instruction at the Country Club at Mirasol in Palm Beach Gardens, Florida.

Succeeding Whaley as Vice President is Jim Richerson, PGA, of Scottsdale, Arizona, who served the past two years as Secretary.

A pioneer in the golf industry, Suzy Whaley, PGA/LPGA, is the first woman to serve as a PGA Officer in the roles of PGA President, Vice President and Secretary. Recognized as one of the country’s top instructors, Whaley previously enjoyed a five-year tenure at Jim Flick Golf Schools, before becoming the Head Golf Professional at Blue Fox Run in Avon, Connecticut, in 2002. From 2004-06, she worked as an LPGA golf commentator for ESPN, and began her own instruction and coaching business, Suzy Whaley Golf, after ESPN.

“Serving the nearly 29,000 PGA Professionals as PGA President is the honor of a lifetime and my way of saying thank you for all the PGA of America has given me,” said Whaley. “I may be the first woman to serve as President, but first, I’m a PGA Professional, and I am incredibly excited by the opportunities that lie ahead. I look forward to helping advance the careers of our Members, by highlighting the profound impact PGA Professionals have as coaches, in operations and sales, and as executives. We’re committed to exploring innovative new approaches to coaching that deliver the experience today’s consumer is seeking.

“Together, we aim to invite everyone to join a game they can play for a lifetime, so our courses more closely resemble the communities we serve. I am grateful for the trust our Membership has placed in me, and I Iook forward to pursuing these opportunities with optimism, purpose and joy.”

A dual member of the PGA of America and LPGA Teaching & Club Professional division, Whaley was a LPGA Tour member in 1990 and 1993. She famously qualified and participated in the 2003 Greater Hartford Open, becoming the first woman since Babe Zaharias in 1945 to qualify for a PGA Tour event. This occurred after Whaley became the first PGA of America woman professional to win the Connecticut PGA Championship.

A member of the Connecticut and South Florida PGA Sections, she is the first person to represent both of these Sections as PGA President.

For a complete bio of Suzy Whaley, please click here.

PGA Vice President Jim Richerson is the Senior Vice President of Operations for Troon®, the leader in golf course management, development and marketing. Richerson is responsible for helping to oversee and grow Troon’s portfolio of managed facilities throughout its related brands: Troon Golf, Honours Golf, Troon Privé (the private club operating division of Troon) and Troon International. Troon is the world’s largest golf management company, with more than 275 golf courses in its portfolio. Previously, he served a two-year term as PGA Secretary, after being elected at the 2016 PGA Annual Meeting as a member of the Wisconsin PGA Section. He was the first Wisconsin PGA Member to be elected as an Officer of the Association.

A member of the national PGA Board of Directors from 2013-15, serving District 6, Richerson also served on the Wisconsin PGA Section Board of Directors, where he was Secretary from 2015-16; Chair of the Wisconsin PGA Education Committee; and a Board Member of the Wisconsin State Golf Association. During his term as District 6 Director, Richerson served as chair of the National Properties Committee; as a member of the National Budget and National Investment Committees; and continues as a PGA.com Advisory Board member. He was recipient of the 2013 and 2016 Wisconsin PGA Golf Professional of the Year Award; the Section’s 2011 Horton Smith Award; and 2012 Bill Strausbaugh Award.

John Lindert, PGA, of Grand Ledge, Michigan, was elected to succeed Richerson as PGA Secretary. Lindert, a PGA Member for more than 35 years, has served on the PGA Board of Directors as District 5 Director since 2016. He is the PGA Director of Golf/Chief Operating Officer at The Country Club of Lansing, Michigan.

Lindert was president of the Michigan PGA Section from 2010-11 and has served on four national PGA committees: Governance Task Force chair (2017); Membership (2008-present); Board of Control (2009-13); and Special Awards (2006-07). Lindert was the 2009 Michigan PGA Golf Professional of the Year and recipient of the Section Horton Smith Award (2015); Player Development Award (2013); the Section Merchandiser of the Year-Private Facilities (2010); and recipient of the Section Bill Strausbaugh Award (2008).

He has competed five times in the PGA Professional Championship. In addition, Lindert was the Toledo Chapter Stroke Play Champion and competed on the University of Arizona Golf Team. Among his community endeavors, Lindert has served on The First Tee of Mid-Michigan Board of Directors since 2007.