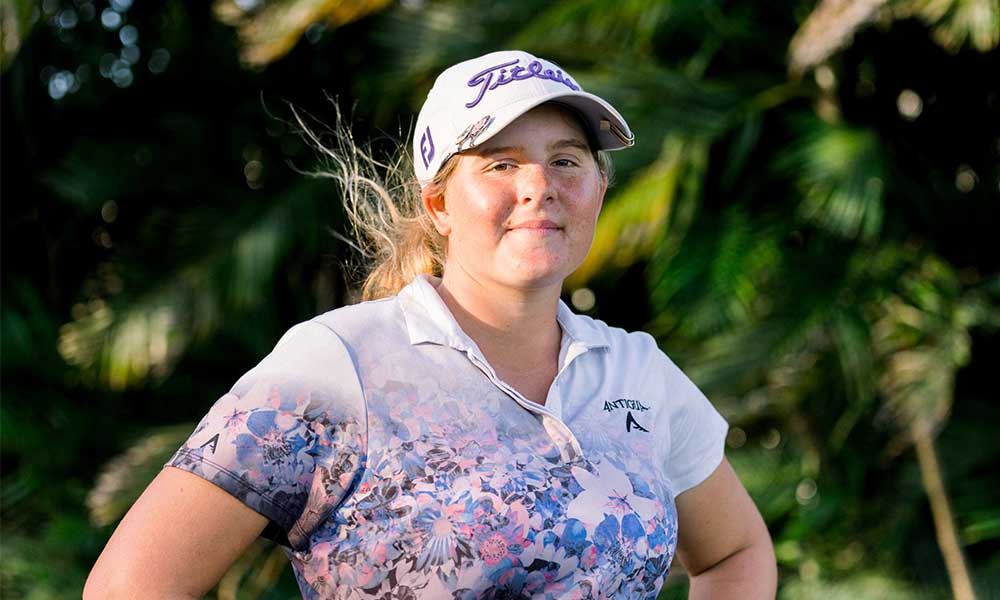 Chloe Kovelesky, a 15-year-old high school student from Boca Raton, broke the Estero Country Club (ECC) course record by shooting a 64 during round one of a recent tournament at the par-72 club. Shooting from a yardage of 6,132 yards, the high school sophomore recorded a 64 during round one of the Florida State Golf Association’s Women’s Four-Ball Championship, played at ECC August 13-14.

The FSGA event consisted of 35 teams over 36-holes of Four-Ball stoke play, commonly known as two-person, Best-Ball. The teams were separated into three divisions: Championship, Mid-Amateur, and Middle. Chloe was in the Championship Division.  At the conclusion of the tournament, the two-person team of Chloe and her partner Gabriella Albert raised the championship trophy, outlasting the defending champions, Elle Nachmann and Amelia Williams, by one stroke to secure the victory.

Chloe surpassed the field during round one by shooting a course record of 64 on her own ball. The pair carded a team score of 61 to hold the lead by four stokes heading into the final round. Chloe birdied the first four holes to shoot a front-nine score of 31 (team score of 30). The pair then continued to card five more birdies for a back-nine team total of 31.

According to Estero Country Club’s Head Golf Professional Andrew Plesz, PGA, “Chloe recorded 8 birdies and 10 pars for a bogey-free round during the event. As the host golf club, we were proud to welcome the tournament and set the scene for this young lady to break our course record as she dominated the course in such a special way. This was an extraordinary accomplishment due to her age and the fact that she played from 6,132 yards, normally played by men. To my knowledge, no current Estero Country Club golf member has fired such an impressive score!”

Shared Chloe Kovelesky, “I truly love the game of golf and have been playing since I was very young. My family has been extremely supportive, encouraging me to play and drive me to tournaments. I’m grateful for the opportunity they have given me. When I was younger, we had a synthetic putting green in my yard and my dog Charlie, a Chocolate Lab, used to retrieve golf balls for me. What I most love about golf is being able to travel and meet new people. Each course has something unique about it, adding to the total experience. The Estero Country Club was in phenomenal shape, fitting me well for the player that I am and making me feel comfortable on the course. I want to thank the maintenance staff for having the course in such great shape. The Head of Golf, Andrew Plesz, was wonderful and made us feel right at home.”

Another accomplishment for her growing golf resume: Chloe played in the 76th Women’s U.S. Open at Olympic Club in San Francisco at the age of 14. She was the youngest player in the field. Her personal motto has always been “you have to be a great person before you can be a great champion.”  Clearly, this young lady is on her way!

Added Plesz, “Our agronomy team did a fantastic job in prepping the course to make it tournament-ready during the summer maintenance season. Participants were challenged by fast greens and a demanding course set up for the two rounds of play.”