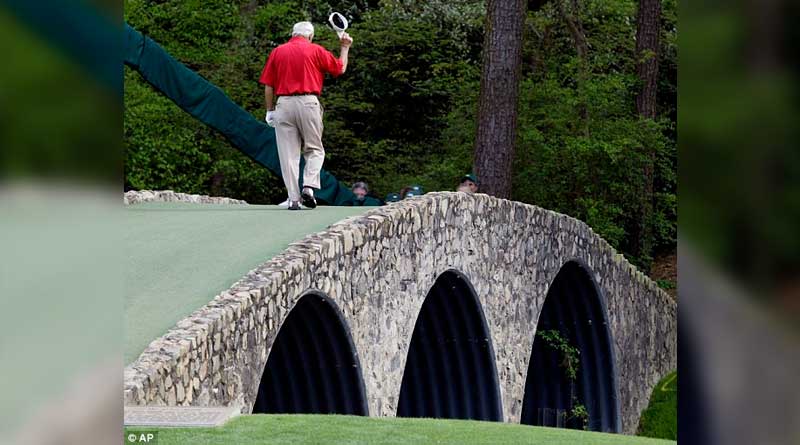 The Greenbrier is mourning the death of one of the great icons of the game of golf and an American legend, Arnold Palmer, who passed away Sunday night at the age of 87.

“It breaks all of our hearts at The Greenbrier to lose Arnold Palmer. What an incredible golfer, but more so, what an incredible human being –The King. I’m so proud that I had the chance to know him and work with him. We’re certainly going to miss him. We’re obviously sad that Arnold Palmer won’t get to see the completion of the new course, but we’re honored that he’s been such a big part of its planning. We will continue to work with his design team, as well as the other legends, and will work harder than ever to make sure the new course properly honors Arnold Palmer’s legacy. Our deepest sympathy and prayers go out to all of Arnold Palmer’s family and friends.” – Jim Justice, Owner and CEO, The Greenbrier

“Arnold Palmer meant the same to me as he did to everybody else. He put golf where it is today. Arnold Palmer didn’t pass away, we just won’t see him physically. But he’ll be here forever and ever. I know that 300 years from now, people will still be talking about Arnold Palmer. It’s a great loss. He was like a father to me. I still remember the day and the month I first met Arnold Palmer. It was on the 18th green of Oak Hill Country Club in Rochester, N.Y., when he congratulated me on winning the U.S. Open. That’s the first time I shook hands with Arnold Palmer, and we’ve been close friends since. I was privileged to play with Arnold in the last competitive round he played in Houston, and I still have the ball he signed for me that day. At The Greenbrier, we’re proud that one of the last golf courses he helped design was here at Oakhurst. He’s going to be missed but not forgotten. I know what Arnold Palmer would want in his memory is for everybody to go out and play as much golf as possible.” –  Lee Trevino, Golf Professional Emeritus, The Greenbrier

About The Greenbrier
The Greenbrier is a distinct and spectacular luxury mountain resort situated in the Allegheny Mountains in White Sulphur Springs, West Virginia. It’s best known as “America’s Resort” and is synonymous with world-class, authentic, southern hospitality. The Greenbrier experience, beginning in 1778 offers a luxurious respite to discerning guests from around the world. The grand scale architecture, Dorothy Draper décor, immaculate attention to detail and legendary gracious service set The Greenbrier apart from all others. Guests walk in the footsteps of Presidents, celebrities and generations of families who regard The Greenbrier as a “one of one” destination. The 710 perfectly appointed Signature Resort Rooms, Classic and Historic Suites, Legacy Cottages and Estate Homes are situated on our breathtaking 11,000-acre playground. Play five championship golf courses (including The Greenbrier Sporting Club’s private course) or experience 55+ activities including professional indoor and outdoor tennis, Off-Road Driving and Falconry. The private, guests-only Casino Club features table games, slot machines and simulcast racing. Our full-service, 40,000 square-foot world-renowned spa is widely recognized as one of the most luxurious mineral spas in the world, and our Retail Collection is comprised of 36 boutiques, shops and hand crafted works of art. In addition to The Main Dining Room, The Greenbrier Restaurant Collection is comprised of 19 restaurants, cafés and lounges featuring traditional, award–winning southern-inspired cuisine. The Greenbrier Clinic has been practicing diagnostic medicine since 1948 and in 2014 was expanded to include a full-service MedSpa and Plastic Surgery Center. With the purchase by native West Virginian Jim Justice in 2009 and a $350+ million restoration, The Greenbrier is now once again the leading luxury resort in the world.