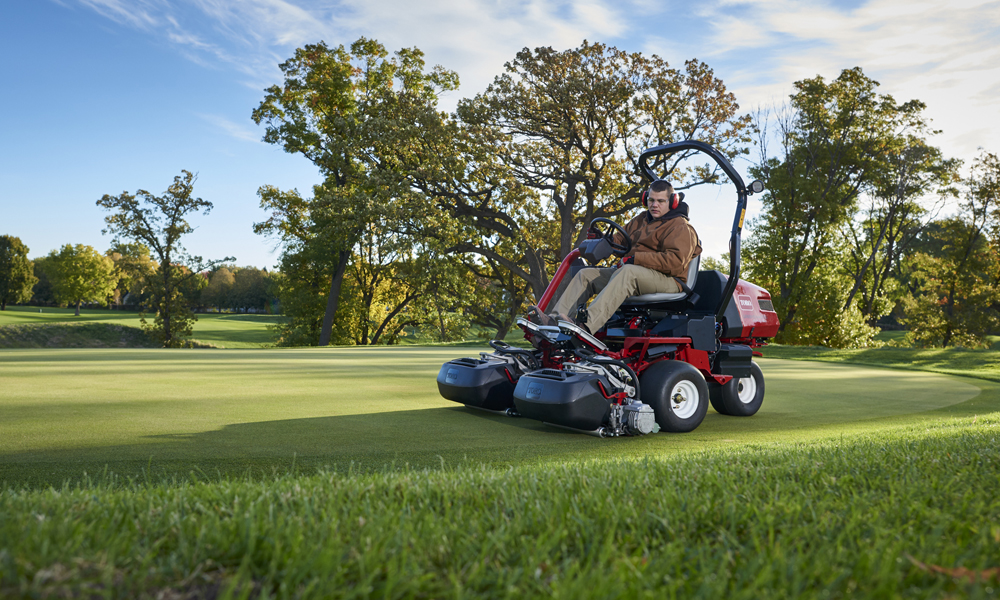 Toro announces the launch of the most advanced, all-electric riding greensmower on the market, the Toro® Greensmaster® eTriFlex™ Series. The new eTriFlex carries no hydraulic fluid and utilizes all-electric components for traction, steering, lift and cutting units. These new “EnergySmart™” models deliver an operationally friendly design with noise reductions, operational cost savings, and other meaningful improvements to complement the ever-important enhancements in cutting performance.

Replacing all hydraulics with electrical components on the eTriFlex puts superintendents at ease by relieving worries of potential hydraulic leaks at the most inopportune times, while at the same time offering superior cutting performance with turning radius-dependent reel and traction speed control.

The lower noise levels of the eTriFlex facilitate earlier mowing starts/tee times without disturbing nearby residents to help the course to be in conformance with local noise regulations. The new engine/generator model, according to end users familiar with the new product, is much quieter than traditional engine powered models, while the lithium-ion powered model is virtually silent during operation.

Cutting performance  has also been improved, especially on the perimeter cut, by monitoring each individual reel and traction wheel speed during turns.  The individual reel and wheel speed control substantially improves both the aesthetics and playability of the green by greatly reducing the effect known as “Triplex-Ring”. This smart feature standardizes the clip rate of each individual reel to avoid turfgrass thinning on the inside reel during perimeter cutting, and reduces wheel turf scrubbing to greatly improve the appearance of the cleanup cut, which ultimately leads to an increase in operational productivity.

The engine-powered eTriFlex with battery assist technology is up to 20% more fuel efficient – resulting in lower emissions and fuel savings.  The industry-first lithium-ion based battery powered unit also has ample power and is virtually silent during operation.

“Our all-electric riding greensmowers incorporate some very important new features that will revolutionize the future of greensmowing as we know it,” said Helmut Ullrich, senior product marketing manager at Toro. “The result is a much quieter, easier-to-operate, labor saving machine that delivers a best-in-class level of cut quality, consistency and playability.”

The Greensmaster eTriFlex also includes several meaningful features for added operational peace-of-mind – such as an automatic slowdown in turns at high transport speeds, auto-brake functionality when the operator dismounts the mower, a foot-operated parking brake as well as an optional mowing slowdown setting to help protect the integrity of the collar.

Finally, operators have more control and access to advanced diagnostic information than ever before thanks to the onboard InfoCenter™. This easy-to-use control panel can adjust mowing and reel speeds, calibrate lift, steering and traction and engage the “slow-in-turn” feature to reduce damage on the fringe area of the green in turn-arounds.