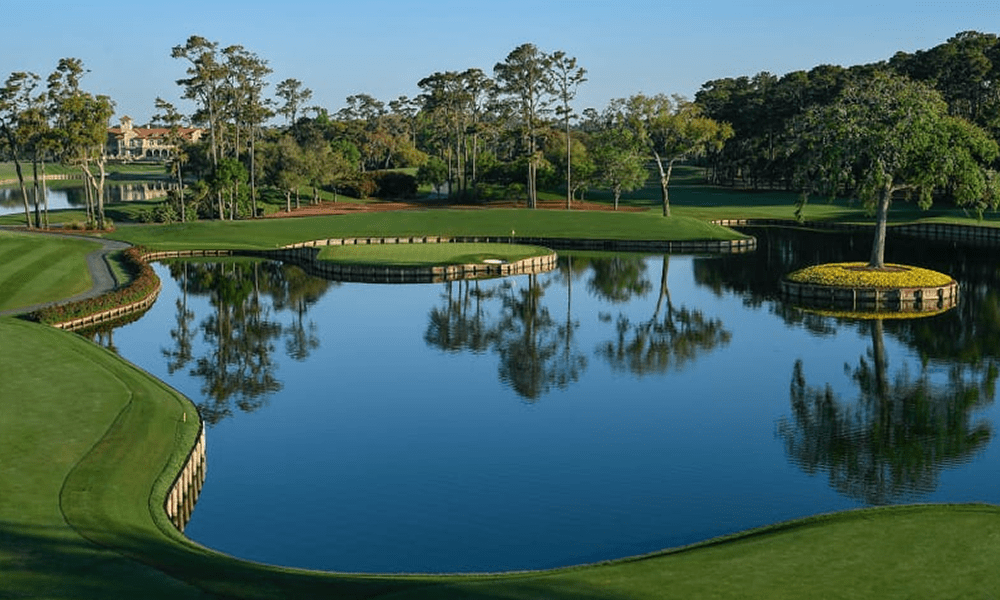 One of the greatest public golf experiences in the nation is found at TPC Sawgrass in the town of Ponte Vedra Beach, just southeast of Jacksonville, Florida.

Deane Beman was the first Hall of Famer to swat a ball at what was to become known worldwide as the Stadium Course . In February, 1978, the then-PGA Tour commissioner hit a ceremonial drive into 415 acres of wooded wetlands and swamps, filled with creatures both snuffling and slithering. It was part ceremonial, part celebratory–the Tour had just purchased the morass for a single dollar bill.

In the ensuing decades, practically every contemporary Hall of Fame member and modern golf star has followed Beman onto the property. This puts the Stadium Course on an extremely short list of public access facilities, in company with the Old Course at St. Andrews and Pebble Beach, to have hosted virtually all of the game’s greats.

Another Hall-of-Fame member, architect Pete Dye (who turned 90 in late December of 2015) was given two directives at project’s inception. The course name was derived from the fact that Beman and the Tour brass wanted large, spectator-friendly mounding throughout the facility, so that golf fans would have numerous vantage points from which to watch the game’s best battle for the tournament title. And the Stadium Course was to be ‘the most democratic course in the world,’ testing all aspects of one’s game. It was to have short and long par-3s and par-4s, reachable and unreachable par-5s, holes bending both left and right, and no two consecutive holes heading in the same direction, so that a prevailing wind would always make holes play differently.

‘Democratic’ might have been the idea. ‘Demonic’ was the end result. How tough was Pete Dye’s initial effort? The Tournament Players Championship was first conducted on the grounds in 1982, and featured names like Nicklaus, Palmer, Trevino, Miller, Wadkins and Sutton–35 Majors won among them. They all missed the cut.

The pros’ initial reaction was pure outrage mixed with sarcasm. ‘I’ve never been very good at stopping a 5-iron on the hood of a car,’ said Jack Nicklaus. ‘Where are the windmills and the animals,’ questioned Fuzzy Zoeller. ‘It’s 90 percent horse manure and 10 percent luck,’ offered J.C. Snead.

At the insistence of the disgruntled Tour elite, Pete Dye quickly smoothed, widened, buffed, and softened some of the Stadium Course’s rough edges. Leveled with so much criticism, he also leveled the heavily contoured greens. Over time, the course became more popular with the pros convening annually for what is now known as the Players Championship. This so-called ‘Fifth Major’ attracts the strongest field of the year, with nearly all of the world’s top echelon in attendance. So while the Stadium Course has an incredible legacy, it’s the layout itself that keeps the tee sheet filled in perpetuity, and the course firmly ensconced in the worldwide top 100. It has always been phenomenally trendy with the pay-to-play crowd, eager to calm their butterflies as they try to hold onto the short iron, then hold the island green 17th. Keep it on terra firma all the way down the final fairway, as water hugs the entire left side. Resort guests and vacationers enjoy this 18-hole thrill ride from openi ng tee shot to final putt. And a large part of the appeal, from the get-go, is that sink-or-swim little tee shot near round’s end, lurking in every player’s mind. The island green 17th, though short in length, stays long in the memory of all who step to the tee box.

Pete Dye was called in to make some significant changes a decade ago, the impetus for the alteration being drainage. The PGA Tour noted that during the Players Championship, the course played five shots harder during dry years than soggy ones. Water, wastelands, and ungainly mounding may abound, but when the fairways are sodden it’s still a dartboard for the game’s best. So during an eight-month, 60-million-dollar renovation, the fairways were scalped and a six-inch layer of fresh sand, the equivalent of 16 football fields per fairway, was installed beneath the grass, the better to percolate and dry quickly after downpours. Now it’s a firmer, faster golf course, where off-line shots bound more quickly toward thick rough, uneven lies, encroaching water, and other unpleasantness.

A new irrigation system was also installed, greenside bunkers were deepened, and 120 supplemental yards were judiciously added to the course, to bring back the same shot values that existed back in the early 1980s. The par-3 eighth hole was a long iron back in the day, but as equipment and fitness levels improved, it became a mid-iron. Now, at an expanded 230-plus yards, it’s a long iron or hybrid club once again. The watery 18th, daunting to begin with, is now a gargantuan 480-yard finisher.

The truth of the matter is that the ‘other’ 18 at TPC Sawgrass, the far-less-in-demand Dye’s Valley Course, is an outstanding test of the game. But talk about an inferiority complex. Directly east and adjacent to the Valley Course lies the Stadium Course, one of the most sought-after and well-known layouts in the history of resort golf. Though the Valley is considered among Florida’s top 20 layouts itself, no faint praise in a golf-saturated state with a thousand-something courses, it can’t help but wither in the tremendous shadow of the iconic Stadium Course. It’s the green-grass iteration of a Billy Ripken or Jim Belushi, doomed by comparison to its Hall-of-Fame sibling.

Despite some slightly tarnished sightlines due to power lines crossing the property, Dye’s Valley Course is a solid layout. It’s full of testing tee shots, beautifully framed fairways, and difficult pin placements. It’s a quality course, and if it existed as a stand-alone facility elsewhere in the state, or in Alabama or Georgia, people would flock to play it.

‘It wasn’t an easy course to build,’ recalls Bobby Weed, Dye’s design associate on the project, ‘but Pete had really done the heavy lifting a few years prior on the Stadium Course, in terms of drainage issues, irrigation, and the like. We were able to tie into their infrastructure, so the construction demands weren’t quite as tough.’ Not as tough to build, and not as tough to play. It’s a wonderful complement to the marquee Stadium Course, and taken in tandem, the TPC Sawgrass facility is one of the finest one-two punches in the wide world of resort golf.