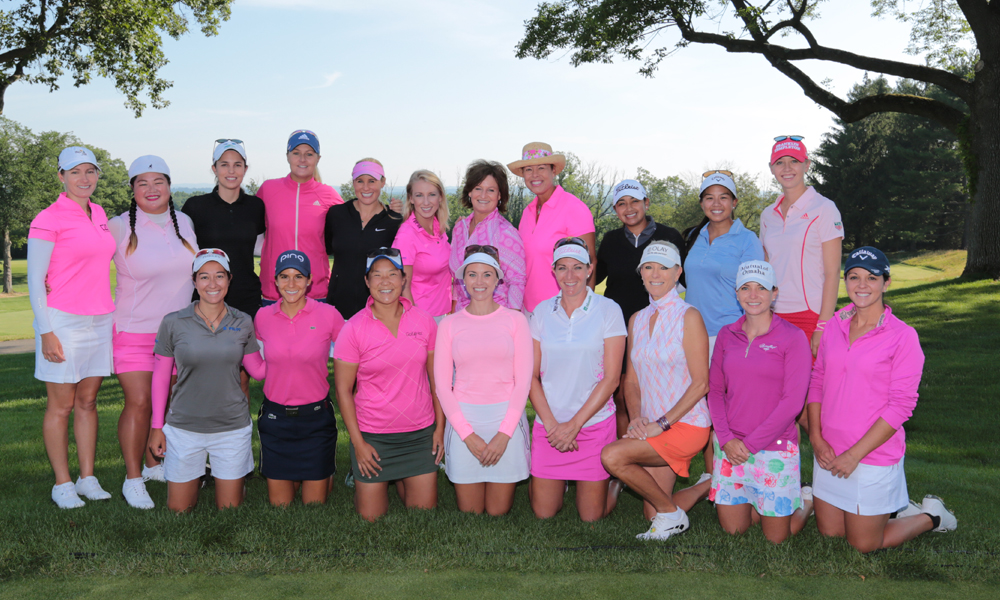 When former LPGA professional Val Skinner’s 18th annual LIFE Event (LPGA Pros in the Fight to Eradicate breast cancer) tees off on June 5, there will definitely be an Olympic feeling in the air. Joining Skinner and being honored as a LIFE Hero is 1984 Olympic Gold Medal figure skater Scott Hamilton. In addition, seven LPGA Professionals who played in the 2016 Olympic Women’s Golf event in Rio will also be in the field. The Val Skinner Foundation has raised more than $11 million for breast cancer awareness, education, and research.

“The Olympic theme is fitting this year as we continue in our fight to eradicate breast cancer,” said Skinner. “Having Scott Hamilton here as a LIFE Hero and having so many great LPGA players and Olympians on hand is a show of force and support for all of our initiatives.”

In addition to Hamilton, the other Olympians on hand include Gerina Piller (U.S.), Anna Nordqvist (Sweden), Sandra Gal (Germany), Gaby Lopez (Mexico), Laetitia Beck (Israel), Giulia Molinaro (Italy) and Mariajo Uribe (Columbia). Other LPGA stars past and present will include:

At the event, Skinner will honor Hamilton, who survived testicular cancer 20 years ago and was diagnosed with his third brain tumor in 2016, for his tireless work as an advocate for cancer patients and their families through his Scott Hamilton CARES Foundation. Hamilton’s mother passed away from breast cancer in 1977.

In addition, Skinner will recognize Kriss Fierro as a LIFE Hero. Fierro, who came to the U.S. from Mexico when she was 15, was diagnosed in 2014 at age 34. Despite going through ongoing chemotherapy and raising her family, she attacks each day with a positive attitude and a desire to help other patients at the Rutgers Cancer Institute of New Jersey.

“Kriss is every much a hero as all of the Olympians who will be at LIFE..she is so special and has a heart of ‘gold’,” added Skinner. “Like Scott Hamilton, she embodies the spirit of a champion. It’s going to be a great – and emotional – day.”

Over the past 17 years, the Val Skinner Foundation LIFE Event has been one of the largest single-day breast cancer fundraisers in the country. The foundation has served as a driving force in the development and implementation of significant awareness and education initiatives including:

Today, the event continues to support precision medicine and clinical services programs at the LIFE Center at the Rutgers Cancer Institute of New Jersey and the continued partnership with Discovery Education to promote the Decoding Cancer curriculum, which is based on BioCONECT, that is taught in high schools across the country.

Because it’s essential to support the study of cancer in the classroom and facilitate meaningful discussions among high school teachers, students and families, the Val Skinner Foundation, in collaboration with the LIFE Center at Rutgers Cancer Institute of New Jersey, the Rutgers School of Public Health and Discovery Education, last year created Decoding Cancer. An interactive biology and genetics education initiative, Decoding Cancer helps students and their families understand the science behind cancer and supports the improvement of students’ science literacy.  In addition, through innovative biology and genetics-focused digital content, this innovative partnership introduces students to future careers in solving the cancer epidemic.

Decoding Cancer is powered by BioCONECT. The BioCONECT curriculum was developed by Rutgers Cancer Institute of New Jersey in collaboration with the Center for School and Community-Based Research and Education at the Rutgers School of Public Health. It is an integrated curriculum supplement that enhances learning by encouraging students to transfer their knowledge of biology and genetics to real-life situations using breast cancer as the context.

Since its launch in 2016, Decoding Cancer has reached an estimated 1.1 million high school biology students with a first-of-its-kind precision medicine Virtual Lab that includes health and biomedical career profiles aimed at inspiring the next generation of cancer professionals. Discovery Communication’s TLC Network has also helped to spread Decoding Cancer’s message and impact to millions more.

Skinner played on the LPGA Tour for 21 years, won six times and spent seven years ranked in the top 15 in the world. She is a member of three golf Halls of Fame and has received numerous awards for her philanthropy and advocacy for breast cancer research. In addition to overseeing her Foundation’s work, Skinner has competed on the Legends Tour and worked for more than 12 years with the Golf Channel.

More information on the Val Skinner Foundation, LIFE Event and programs funded by the event can be found at www.valskinnerfoundation.org.