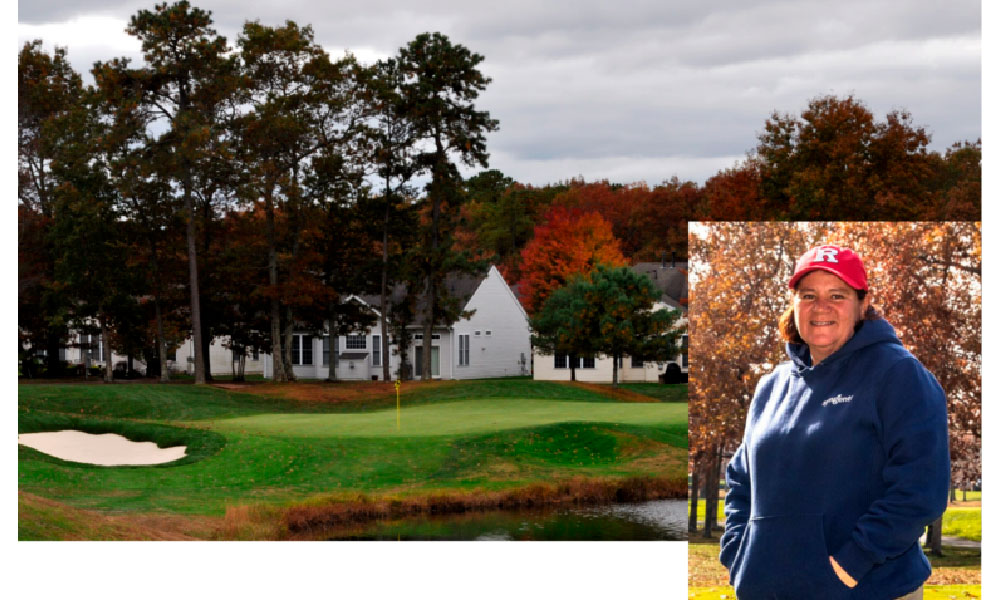 Jennifer Torres first developed her love for being outdoors in the earliest part of the day while growing up on a small family dairy farm. After serving in the military, working as a “cable gal” and running a day-care center, she found the perfect profession to take her back to her roots.

Growing up on a small family dairy farm in upstate New York, Jennifer Torres longed for an occupation that would allow her to begin her workday when the sun rose.

As a golf course superintendent, her dreams have been realized, but not before following a circuitous route that included stints in the military, working as a cable television technician, and even running a children’s day-care center.

Torres’s grandparents started the farm, which is near Corning in New York’s Finger Lakes region, and then turned it over to her parents. Torres was joined by two sisters and a brother in helping their mother and father tend to the work, and the experience instilled a work ethic that has helped her achieve success as a turfgrass manager.

“Working on the farm required dedication and commitment,” Torres said. “I learned to respect the land and respect nature. It was hard work, but I enjoyed it. My dad said there was nothing like seeing the sunrise, and I agree with that.”

Interwoven with milking cows and other chores was a busy childhood full of sports. In high school, Torres was a standout in soccer, volleyball, and softball (her best sport). True to her “early riser” status, she would practice pitching in the mornings before school, by throwing through a tire hung on a backstop on a field her dad had built near the entrance to the farm.

Upon graduation, she had every intention of going to college, but then became intrigued with joining the military.

“I was going to be a graphic artist,” Torres says. “But my parents mortgaged the farm for my sister to go to college, so I considered other options. I had some friends who were going to join the Army, so I thought it would be a good option to not only fund my education but also serve my country.”

Over a four-year period, Torres’s stint in the military, in the role of a mobile-subscriber equipment operator, took her from basic training at Fort Jackson, S.C., to Advanced Individual Training in Fort Gordon, Ga., to Korea and finally to Fort Drum, N.Y. After being discharged, she returned home to Corning and became a technician for Time Warner Cable. She married her husband Ricardo, whom she met while stationed at Fort Drum, and they relocated to Fort Dix, N.J. in October 2000, where he took a federal job position. While there, she started a day-care service for the families on the base.

Torres then transitioned to something else she had done at an early age, driving a tractor—but this time at Fountain Green Golf Course, located at Fort Dix.

And it was while working on the golf course that Torres’s life took a turn when Superintendent John Huda and assistant Dan Mears encouraged her to pursue a turf degree at Rutgers University. Approaching 30 years old and with three kids in tow (ages 11, 7, and 5 at the time), she took the leap and started the daily, 90-mile roundtrip to Rutgers.

“I had the full support of my husband,” Torres says. “He worked nights, so it allowed me to go to school. He told me to go for it and not worry; the work at home would get done. Plus, the G.I. Bill helped to fund my education. It was a great opportunity.”

While at Rutgers, Torres would enhance her skills by working with the school’s computer network, setting up the system prior to each class she attended. She also continued to work at Fountain Green GC. Her exploits were rewarded with the Paul DesChamps Memorial Scholarship and the Fort Dix Officers and Wives Club Scholarship. She completed the program, graduating with high honors.

In her conversation with C+RB, Torres tells the rest of the story after she set out on the next chapters of her life:

C+RB Let’s first talk about the impact of the coronavirus on your course and staff. Is it open?

Torres Not now [as April began]. On March 15, we had just opened for the season. We had removed the putting-green flags, turned the cups upside down, wiped down the flag poles, removed all rakes, closed access to the pro shop, and requested social distancing, with one person per cart. On Sunday, March 22nd we received word that Governor Murphy had forced all courses to close in New Jersey. All aspects, except course maintenance, are currently closed. (Editor’s Note: New Jersey courses were finally allowed to open on May 2nd.]

C+RB How has it affected your staff?

Torres These are very different times, and as a leader, I too am adjusting. The fear that my staff has expressed is real and I understand that fear. Some of my staff have young children at home and they worry about bringing this virus home to their families. Others are in the age group that has been hit the hardest and has health issues, so we have talked about their needs during this time as well. They know I am doing my best to look out for them.

I took it upon myself to sew masks for my staff because there were none to be found in New Jersey. We are following recommendations from the Center for Disease Control and the World Health Organization. My staff cleans and disinfects prior to each shift. Each employee is assigned a piece of equipment. No staff rides together in the same carts. Gloves are provided, as well as cleaning supplies. If weather permits, doors are left open, so there are fewer touch-point areas.

Everyone on the staff seems very upbeat, and at least we can work outside, with very little interaction with others. But it is different. We can only hope it comes to an end soon, and to make sure the course will be ready when golfers return!

C+RB When you decided to pursue your turf degree at Rutgers, were there other females in the program, and what was the reaction of your classmates to having you in the program?

Torres I was the only female, but I was treated great. Everyone was very encouraging and supportive. It was an awesome experience. My mother had always told me not to hold back and settle for less than I wanted. She has always been right by my side. That helped a lot. The other students always wanted me to join them to go out after class, but I had to study and get home to my family.

C+RB What did you do upon graduation?

Torres I had actually taken the Assistant Superintendent position at Indian Springs Golf Course in June 2006 and graduated from Rutgers in November of that year. It was great to work for Mark Peterson there; I learned a lot on the job from him and then from Jeremy Hreben, who replaced Mark after he moved on to Makefield Highlands Golf Club.
Unfortunately, my position at Indian Springs was eliminated in the fall of 2011. I was fortunate, though, because Mark had moved on to the Director of Agronomy position with Spirit Golf and he hired me as the Assistant Superintendent at Makefield Highlands the following June. The township-owned the facility, but Spirit Golf managed it. I was promoted to the head superintendent position in March 2016.

C+RB Why the move to Westlake last year?

Torres It was a good career opportunity for me at a time I was looking for a change. I have only been here [since October 2019], but I have a sound staff and the golf course is in fine condition; Tony Johnson left it in good shape for me to continue to improve. They had just renovated all of the bunkers with the Better Billy Bunker lining this past fall, and I am very thankful for that.

C+RB What is your clientele at Westlake?

Torres We are a private club owned by the membership, but you have to be 55 or older. You can join if you are younger than 55, but you have to be sponsored by a member. We are full-service, with tennis, swimming, weights, bocce, and a restaurant. We do host a few outside groups.

From a playability standpoint, it is a fun golf course to play. There are many ponds, but very limited carries on some holes, and we have many slopes and mounds.

C+RB What are your course challenges?

Torres Tony [Johnson] started a thatch-removal process, and I will be continuing that. We also have too many trees, and our rough struggles a bit, as it is patchy in places. We need to remove some of the trees. We are also doing an irrigation audit in preparation for a possible upgrade; it is going on for 20 years and needs some work.

C+RB Your career has turned out to be a family affair, hasn’t it?

Torres Yes, it has. My two daughters worked on the golf courses at different times, and so has my son, Ricardo, Jr. He was young when I started at Rutgers, so he grew up around it. He has worked for me for almost four years and is taking online classes in turf management from Georgia.

I want him to do what he wants to do. He knows what is involved in this profession, so he can make his own decision. I am sure it is not easy working for your mother. He gets razzed a little, but it is all in good fun.

C+RB Who have been some of your other mentors been along the way?

Torres I have really learned from so many people—my instructors, classmates, co-workers, and bosses. I give John Huda and Dan Mears the credit for getting me started. They had so much passion, and that rubbed off on me. I also give credit to CeCe Peabody, the Executive Director for the New Jersey Turfgrass Association and former Executive Director of the Golf Course Superintendents Association of New Jersey. She helped me get involved in the chapter and showed me how I could develop professionally. It has helped to have the interaction and network with others.

C+RB What have you done on the chapter level?

Torres I am now on the Board of Directors for the New Jersey chapter, and that has been a valuable experience. I have also become involved in the Golf Course Superintendents Association of America’s Grassroots Ambassador program, which is focused on advocacy and government relations.

For the past two years, we went to Washington, D.C., to participate in National Golf Day. I took my son with me, and we were involved in the project to renovate The National Mall. We also had a full day of meetings with our elected representatives and senators. I am also starting to get more involved with those officials on the state level. It has been a real growing experience for me, but also for Ricardo. I think it opened his eyes a lot, and it has helped him to be around other leaders in the profession.

C+RB What does your future hold?

Torres Well, I’d love to retire in the profession. I like it here at Westlake, so I’d like to keep doing this for a while. I also want to continue to be a mentor for other women entering the industry. I have a passion to advocate for our profession as well, so who knows where that may lead. And, of course, I want to continue to go to [New York] Giants and Yankees games in the future.

It has gone quickly—I used to be a student with three young kids, and now I am 46 and a grandmother!

Super in the Spotlight