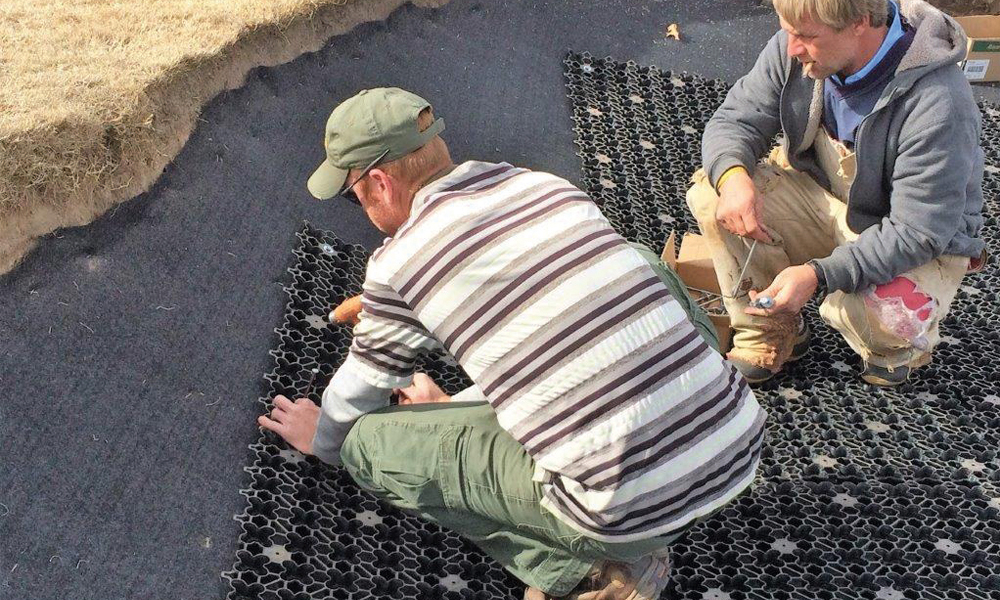 If you ask Michael Bean what’s the most difficult part of his job as the Director of Sales at AirField Systems, he will smile, shake his head and say, “The only hard part is getting people to believe the system’s as good as it really is.

“It’s hard to convince people,” Michael explained, “that there’s bunker drainage that won’t be clogged by fines and that they can install without having to rework their clogged herringbone system. That is until they try it.

“I recommend that golf course superintendents pick the worst draining bunker on their course and install the AirDrain bunker drainage system. Then call me back in three months because I know from experience that they’ll be ready to order enough product to re-do the rest of their course.”

Why does the AirDrain bunker drainage system inspire Michael with such confidence? With rigorous scientific testing behind it and the enthusiastic endorsement of golf course superintendents and turf managers, the AirDrain system is a solution to believe in, delivering cost-effective, maximum drainage from a bunker floor that is ninety-two percent air.

And after all, what could possibly drain better than air?

AirDrain geocell drainage layers are manufactured from 100% recycled copolymer with the impact modifier metallocene added, qualifying the material as a “no break” plastic. Each pallet covers approximately 798 square feet of surface area. Installation is simple and can be handled by your course maintenance crew, eliminating the cost of additional labor.

The panels typically arrive at your course on a fifty-three-foot trailer, palatized and ready for installation. Because there is no gravel drain field involved in the installation process, you avoid the problem of heavy dump trucks compacting your soil. Once in place, any overage of the panels can be trimmed with either tin snips or a circular saw with a no-melt, plastic-cutting sawblade. Superintendents typically find, however, that meticulous shaping is not necessary. They run the geocells only over the flatter surfaces of their bunkers, making the already-easy installation process even easier.

Golf course architects, engineers and others often ask, “How fast will the AirDrain grid drain?” Michael explained, “AirDrain delivers 100 percent vertical drainage under every inch of your project. Given that the area of an AirDrain part is one-inch high and has a 92 percent air void, drainage is only limited by the exit drains, and by what is above the grid or geocells.

In response to the question of how fast drainage will occur, AirDrain Systems tested its grids using the ASTM D 4716 Hydraulic Transmissivity Standard Test Method. Michael summarized the results of the test as follows:

The testing was done using plates on top and bottom of the AirDrain part, setting them to the required slope and adding water from the high side of one end down the slope. AirDrain was draining so fast they (the testing team) had to modify their testing equipment to accommodate the volume of water AirDrain could move!

As it turns out, there is practically no resistance to drainage using the AirDrain grid. The most important factor to consider is the percentage of a slope that the AirDrain is sitting on. To put this in perspective of rainfall, AirDrain can handle anything that Mother Nature throws at it. On a nearly completely flat surface (one-half percent slope) AirDrain will drain over 171 inches in an hour. AirDrain can also hold .576 gallons of water per square foot if needed. until it can evacuate to the perimeter exit drains.

Despite the value and influence of academic research and field testing, nothing speaks to the effectiveness of a product as strongly as the endorsement of people who put it to work at their facility, watching how it functions day in and day out, under a variety of weather and playing conditions. Golf course superintendent, Andy Thibault, is starting his tenth year at The Greens Country Club in Oklahoma City.

The good-news story of The Greens is that it is a thriving private facility that sees over 35,000 rounds of golf annually, including playing host to a full schedule of fundraiser and chapter tournaments, local events and in some years, select Women’s Oklahoma Golf Association (WOGA) competitions. With tennis, swimming and a busy schedule at the recently renovated clubhouse, there’s always something going on at The Greens.

Frequently, Andy finds that his biggest challenge is scheduling. “We work hard to keep the balance between maintenance requirements and membership activities, said Andy. “I tell my guys, mowing is easy. Scheduling is the hard work.”

EMBRACING THE CHALLENGE HEAD ON

Throughout the year, Andy’s crew fluctuates in size from six or eight workers to about fifteen during the busy summer months. Although the season at The Greens typically gets underway by early April, Oklahoma’s sometimes mild winters mean that golfers may be on the course through December. Recognizing that the demands of a growing facility are the best kind of problems for a superintendent to have, Andy, points out that he is, “taking the challenge head-on.”

“We get good feedback from our members and they are appreciative of all the improvements we continue to make,” said Andy. “This year, we converted from Bent to Champions G12 and we’ve had all the trials that go along with making that change. But we are looking forward to the consistency the G12 will bring to our course and we can’t wait for spring to see how far we can push the grass.”

Although the course once had as many as a dozen poorly draining bunkers, Andy chose, at first to implement the AirDrain drainage system on only a few of the most problematic bunkers. Using his winter crew, Andy and his team were easily able to rework a bunker in about four or five days, while still keeping pace with the rest of their workload.

“We approached the use of AirDrain with an open mind and we quickly realized how very effective this system is,” Andy said. “We can get one to three inches of rain, yet we’ll have no washout. With AirDrain bunker drainage, we saw a huge improvement in the quality and consistency of the sand.

“After using our own crew to replace bunkers, working on a few each year in our offseason, this year we decided to do all the remaining 39 bunkers. We brought in a company to excavate the sand, just to make the process move faster. You can easily do the work in-house, but with a small crew, it just takes longer.

“By using the contractor to speed up the process, the work was completed, start to finish, in three to four weeks. And the thing I like most about it is that we will never have to replace it. Over time, the only problem you will have will be your sand, which you can change out.

“The members have loved the bunkers with the AirDrain system. They recognized the difference from day one and appreciated that the sand didn’t have any wet or dry areas, just as they appreciate all the improvements we continue to make. I can’t wait to see where we’re going next.”

Andy’s praise of the AirDrain system is no doubt music to Michael Bean’s ears, but it’s also a tune Michael is accustomed to hearing. He knows that once a superintendent tries the bunker drainage system on one bunker, AirDrain Systems will be hearing from that superintendent again.

And as if the understanding that nothing drains better than air isn’t enough to sell the product, Michael loves to point out the affordable price. “The great thing about our bunker is that not only is the whole floor a drain, but the AirField bunker drainage systems costs 30 percent of what most other bunkers systems cost.”