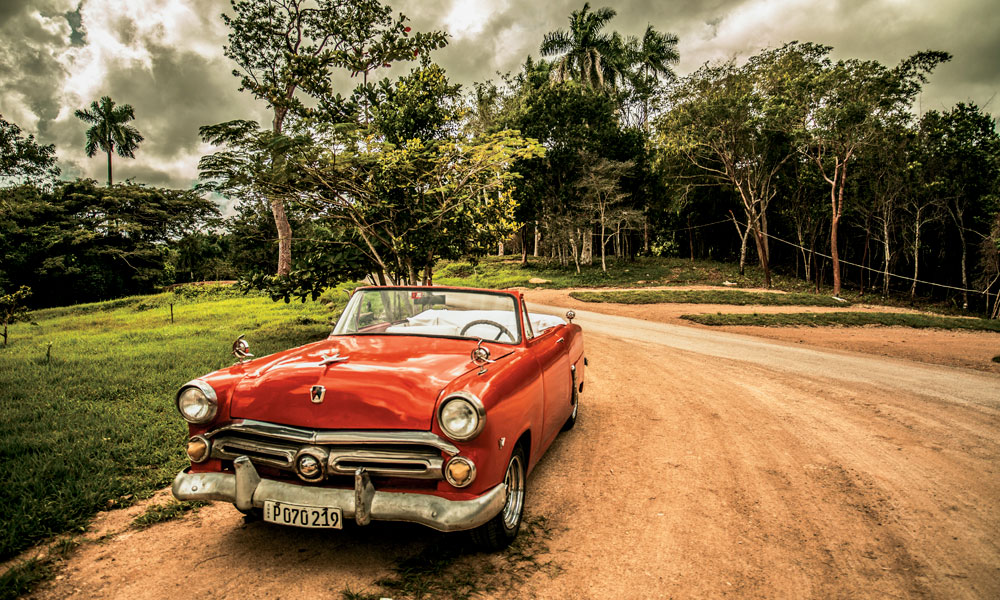 Tour the golf courses of Cuba and you will begin and end your tour at the historic 18-hole El Varadero Golf Club. Not only was it the first 18-hole course built in Cuba, El Varadero is today, the only 18-hole course on the entire island.

Back in the Day

The land on which the Varadero Golf Club is built was once the estate of chemical magnate, Irénée du Pont de Nemours. A French American, du Pont was part of the industrial du Pont lineage of Delaware, making him a member of one of the wealthiest families in American history.

Upon his retirement in 1927, at the seasoned age of 49, du Pont sought a place to build a summer home. He chose a 1300-acre plot in the rocky hills known as the San Bernardino crags of Cuba. DuPont purchased the land for the estate for pennies per acre and then spared little expense in the building of his eleven-bedroom, eleven-bath retreat and gardens, a property he christened Xanadu.

Herbert Strong designed Xanadu’s original 18-hole course. Three years after its completion, the course was heavily damaged by a hurricane. Sim Cuthrie was then hired to oversee the refurbishment and to pare the course from 18 holes to 9. For nearly three decades, the du Pont family and their guests enjoyed the 9-hole course at Varadero and on select days made it available to area residents to play.

In 1963, six years after du Pont visited Xanadu for the last time, the residence reopened as Las Americas Restaurant. Although the course at Varadero saw limited play during the 1950s and 1960s, other courses were flourishing, and tiny Cuba became a tour stop for both the PGA and LPGA Tours.
Erasing a PGA Tour Event from the Record Books

The U.S. women’s tour played the Havana Open from 1956 to 1958 at the Biltmore Country Club while the men played at the Country Club of Havana. Both courses were Donald Ross designs.

Patty Berg, Louise Suggs, Billy Casper and Bob Toski were among the U.S. players to log victories in Cuba in events that also attracted Snead, Hogan, Palmer and other superstars of the game. The beaches were amazing, the Caribbean rum flowed and the cigars were legendary, but that was all about to change.

The revolutionary movement was tightening its grip on the Cuban people, replacing island ambiance with security checkpoints and armed guards. By 1958, when the players teed up for what would become the final Havana Invitational, they were well aware that Fidel Castro and his guerillas were watching from the hills. The rebels’ presence, like hot breath on the back of your neck, signaled danger that is much too close at hand. Billy Casper did tell Golf Magazine years later, however, that he didn’t have a sense of the unrest once he got to the golf course. “You got to the first tee,” said Casper, “and you just played golf.”

In 1959, at the start of the Castro regime, Cuba had roughly a dozen golf courses. In the years immediately following Castro’s takeover, the Havana Country Club was bulldozed and replaced with a school and the Biltmore Country Club was transformed into a military training site. Other golf courses met similar fates, many repurposed as crop land. 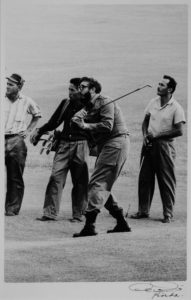 With conditions in Cuba spiraling downward, the PGA Tour not only eliminated Cuba from its tour stops, it erased the tournament from its historic records. Even the all-seeing, all-knowing world wide web produces little to validate that the Havana Invitational existed at all.

A Tee Time for Fidel Castro and Che Guevara

In a gesture that historians have speculated was intended as a snub against golf-loving President Eisenhower and a way to emphasize golf as “a game of the idle rich,” Fidel Castro and Che Guevara played a single round at Varadero Golf Club. Photos of the twosome were widely distributed showing Castro and Guevara hitting their shots dressed in military fatigues and combat boots, surrounded by their entourage, including armed guards.

A Cuban author, serving as Castro’s personal correspondent, wrote about the round of golf, noting that Guevara shot 127 while Castro carded 150. Two days after the article went to press, the journalist was demoted and then sentenced to a three-year-prison term.

Yet time moves at its own pace in Cuba. This year, CubaPlus Magazine published an article titled “A Necessary Clarification” intended to provide insights regarding the more than fifty-year old photographs. The ombudsman-style piece identified Captain Antonio Núñez Jiménez as being part of the historic Castro and Guevara golfing photos and quoted Núñez Jiménez as saying, “As we looked for locations for future school centers, Fidel, Che and myself went through the Bacuranao zone, east of the city of Havana. When we got to the Colinas de Villarreal (Hills of Villareal), we noticed that we were on a golf course.” 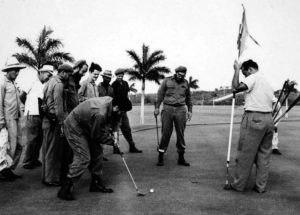 The 1991 collapse of the Soviet Union brought with it the decline of economic relations between Cuba and Russia. To replace the loss of Russian investment, a struggling Cuba sought to reenergize tourism, hoping to attract more visitors from Europe, Canada and South America. In 1998, Les Furber, an associate of Robert Trent Jones and the president of the Canadian company Golf Design Services LTD, was hired to restore the Varadero Golf Club, a project that was far more new construction than redesign.

Despite repeated delays, the 6856-yard, par 72 Varadero golf course was eventually completed, with the original Xanadu residence functioning as a club house and a six-guestroom boutique hotel. Adjacent to the property is a 5-star resort, the Hotel Melia Las Americas, operated by Sol-Melia, a Spanish-owned hospitality provider. Varadero succeeded in attracting the European Tour for its 1999 and 2000 Challenge Tour events. Other tournaments, such as The Great Golf Tournament of Cuba, which permits pros and amateurs with handicaps as high as 24, have become annual events at the course. This year’s Great Golf Tournament was held in October and hosted by Greg Norman. Previous hosts have included Ernie Els, Alvaro Quiros and Tony Jacklin.

The only Cuban course to survive from the pre-Castro era is the 9-hole Havana Golf Club. Preserved during the heyday of Communism as a courtesy to foreign diplomats, the course is located near the José Martí International Airport.

However, the Havana Golf Club is not your average executive course. Bunkers lack sand because locals remove it, using it to stabilize the walls of their homes. Likewise, peeled twigs serve as flagsticks. Residents in need of building materials find aluminum, fiberglass or even hardwood flagsticks too tempting to pass up.

Previously, Cuba’s Ministry of Tourism declared the government’s intention to build ten new golf courses. International investors, developers, bankers and course architects continue to visit the island. From time to time news surfaces about planned courses and luxury resorts.
For now, however, the country is no closer to these new golf courses than it was in 2009 when the announcement was first released. Ironically, in many ways, it is no further away from this vision, either.

Time, it seems, truly does move differently in Cuba, keeping the future forever entwined with the past.

Bunker renovation underway at The Meadows at Mystic Lake
Rogers Revamps Preserve at Quail West; Lakes Course Next on the Docket
To Top