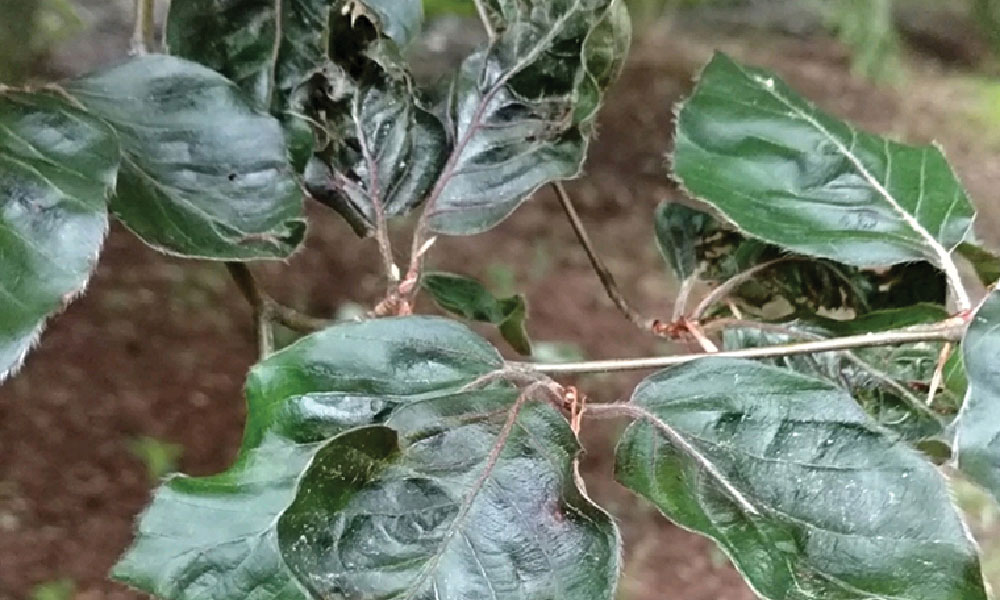 Beech leaf disease (BLD) is an emerging disease caused by a nematode, or microscopic worm. All cultivars of American and European beech are susceptible.

Beech are ecologically important trees in the eastern United States and are common feature trees in landscapes. Beech leaf disease was first observed in Lake County, Ohio (Cleveland area) in 2012. Since its initial detection, the disease has been observed in other counties in Ohio, Pennsylvania, New York, Connecticut, and Ontario. BLD is caused by a foliar-feeding nematode, Litylenchus crenatae, which was described initially on Japanese beech in Japan where it causes a mild disease. In the United States, however, healthy beech trees have been observed dying in a period of six years from the onset of symptoms. As BLD progressively worsens, the tree’s overall health weakens exposing it to secondary insect pests and diseases.

Symptoms of BLD typically progress from the bottom of the canopy upward, but can be observed randomly scattered throughout the canopy. Early symptoms include distinct striping between the leaf veins, gall tissue in interveinal discoloration, and darkening and/or chlorosis of the infested area. Symptoms can be confused with leaf galls caused by erineum mites. From the top of the leaves, the interveinal discoloration will appear cupped or puckered in appearance.

After successive years of being infested, leaves will become deformed, chlorotic, and have a thickened, almost leathery texture. By this stage the photosynthetic capacity is reduced, and trees cannot produce the amount of carbohydrates needed for overwintering, resulting in a general lack of vigor. This stresses the tree, and predisposes it to other secondary invaders, such as insect borers and fungal cankers. 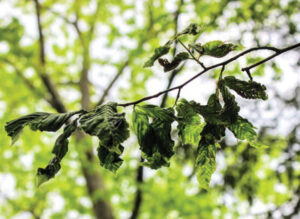 The causal agent of BLD is the foliar-feeding nematode Litylenchus crenatae. It is possible an unknown microbe is being vectored by this nematode, but no hard evidence has suggested this to date. This nematode was described in 2018 on Japanese beech in Japan and is thought to be native to Japan and other parts of Asia. This nematode has an egg stage, several juvenile stages, and an adult stage where both male and female nematodes are present. Based on current knowledge, this nematode only infests leaf tissue, where it causes gall-like growths between the leaf veins. The damage appears to occur while the leaf tissue is in the bud. The nematode has not been detected in woody tissues or roots. Adults of L. crenatae penetrate wounded leaf buds, and overwinter in buds as adults and eggs. Once the buds open in spring, BLD symptoms are immediately evident on infested leaves with numerous L. crenatae eggs being present. As the season progresses, the eggs hatch in the late spring and into the summer producing large numbers of nematodes that will penetrate the buds as they form in the summer.

Locally, the nematodes can move in shallow films of water on trunks from rain, irrigation or melting snow. In addition, there have been some reports of the nematodes “hitching” a ride on non-flying arthropods (e.g. spider mites), which can assist with local spread. It is still unclear how the nematodes are moving long distances, but birds have been suggested. Like many diseases, human-mediated movement by movement by installing infested nursery stock is an additional way it can spread long geographic distances.

Avoid moving beech trees from areas where there are known infestations. There is limited data on preventive or therapeutic treatments for BLD. Several products that have nematicidal properties are being explored as potential options for management. Some of these products contain active ingredients that are derived from natural products produced by soil microorganisms. These products are only labeled in the United States.

Avoid moving beech trees from areas where there are known infestations. There is limited data on preventive or therapeutic treatments for BLD. Several products with nematicidal properties are being explored as potential options for management. Preliminary research data indicates that trees treated with TREE-age® have significantly fewer nematodes compared to untreated checks.