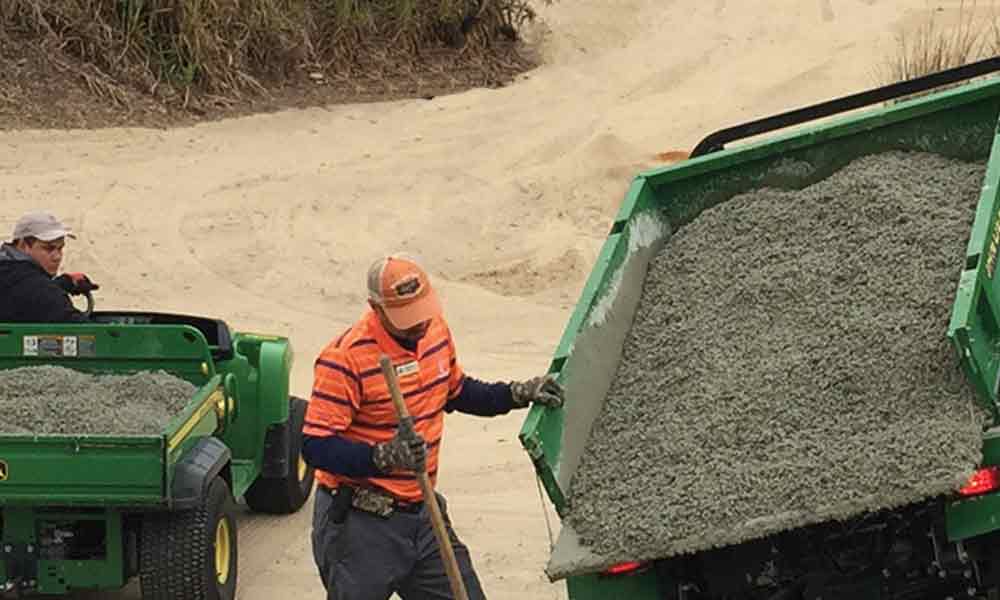 Capillary Concrete™ is a patent-pending sports base designed for both drainage and hydration. With the capacity to move water in two directions, it’s a logical choice as a golf course bunker base.

This hydrating engineered product is quick to install, uniquely warranted, remarkably durable and environmentally safe. Best of all, Capillary Concrete’s simplicity and effectiveness makes it easy for golf course superintendents to reduce cost of bunker maintenance while significantly enhancing the playing condition of the bunkers.

Poring Over the Details

Let’s start with the basics. Capillary Concrete is porous and drains rapidly across every inch of its surface. But draining a bunker is only half the battle. Restoring and controlling moisture within the bunker is equally critical.

The patented Capillary Concrete system includes macropores that are large enough to permit efficient drainage, while still being small enough to avoid migration of sand particles into the drainage system. Smaller mesopores (or micro-pores) then utilize capillary force to bring water back to the sand faces when conditions are dry, preserving playability.

The only thing better than a drainage system that helps golf courses avoid wash outs, minimizes plugged lies and keeps even near-vertical bunker faces covered in sand is one that is quick and easy to put in place. Preparing a bunker for the installation of the Capillary Concrete base starts with cleaning out the bunker and then checking its drainage. Step two is to spread the mixed-on-site Capillary Concrete across the entire surface of the bunker at a thickness of about two inches, smoothing and rolling the mixture evenly.

The bunker base requires approximately six hours to cure before the bunker sand can be replaced. Optional steps include troweling the bunker edge and installing dripline irrigation. Committed to the success of each bunker, Capillary Concrete provides a company representative onsite to walk the maintenance crew or contractor through the simple installation process.

Coverage includes the cost of transporting materials to the site as well as the cost of the aggregate and all products required for installation. The guarantee has a few limited exceptions such as not covering repairs in the case of deliberate destruction or an act of God; however, it extends for five years, is transferable to new owners in the event of a sale or change of ownership and may potentially be extended through future renewal options.

To date, Capillary Concrete bunkers have been successfully in use on courses across the U.S. for six years and in Norway and Sweden for nearly a decade. The bunker base has weathered severe winters, soggy summers and drought-like conditions. Although Capillary Concrete has been rigorously lab tested for strength and stability, including testing in freeze-thaw cycles at extreme temperatures, some of the most helpful observations about Capillary Concrete’s durability come from the superintendents who use it. 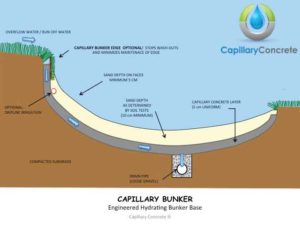 Agne Strom, golf course superintendent at Gamle Fredrikstad Golfklubb in Norway offered a firsthand insight that goes beyond observing the durability of the surface in daily use. After removing the sand in the process of course renovations, Agne found that despite experiencing harsh Scandinavian winters, his Capillary Concrete bunker base had sustained no weathering or structural damage.

“I dug up the sand today in one of our bunkers,” said Agne, “I am turning it into a chipping area by green #7. After three trouble-free seasons and two winters, I can testify of zero damage to my Capillary Concrete. I strongly recommend this product. Never a wash-out. I spend about 10 hours per week on my 45 bunkers.”

Although the inventor of Capillary Concrete, Martin Sternberg, is a native of Sweden, his inspiration for the product came while he was at one of America’s most iconic golf courses, Augusta National. Martin noticed the Augusta maintenance crew hand watering the bunkers in the early morning hours before play commenced during the Masters. The purpose, the crew explained, was to make the sand more compact, which subsequently makes balls less likely to plug.

A graduate of Higher Greenkeeper Education at Swedish University Ulltuna and the first European Certified Golf Course Superintendent through the Golf Course Superintendents of America, Martin is skilled and knowledgeable, yet over the years, he found bunker maintenance to be especially frustrating. “No matter which product we tried,” said Martin, “there was no one (product) that could resolve everything and act as the basis of perfect bunkers. …Maintenance was both expensive and time consuming.”

Recognizing that most courses operate on far tighter budgets and with substantially fewer crew members than that of Masters week at Augusta National, Martin began looking for alternative ways to simplify the labor-intensive task of bunker maintenance. Channeling his frustrations into research, Martin considered many options as he experimented with various aggregates and polymers mixed with concrete.

The result of his efforts evolved into the thriving company, Capillary Concrete, and a product that draws praise from superintendents around the globe. Today, you’ll find Capillary Concrete in use across the U.S. and in Europe, Canada, Mexico, the Caribbean, South Korea, Japan, Malaysia, Singapore, South Africa and Australia.

With labor costs and water management at the top of every superintendent’s hot list, it’s no surprise that golf courses from the Atlanta Athletic Club to the sunny fairways of La Quinta Country Club are turning to Capillary Concrete, for bunkers that drain, retain and sustain. 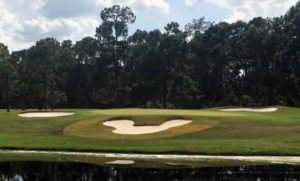 Capillary Concrete in His Ears

In August 2017, Capillary Concrete was used to update the well-known Mickey Mouse bunker on the 6th hole of the Walt Disney World® Magnolia Golf Course in Orlando. This rebuilding effort was not the first occasion the mouse had required a makeover. The distinctively shaped bunker has been rebuilt multiple times using traditional methods of bunker construction. Despite the liners and drainage tiles previously used to control erosion, Central Florida’s frequent and often heavy rainfall left the course maintenance crew continually battling sinking sand and deterioration of bunker shape.

To address the problem, decisionmakers at the Magnolia Golf Course chose Capillary Concrete to improve sand conditions and significantly increase the lifespan of the bunker. Given the precise requirements of the bunker’s shape, workers elected to remove the bunker (ears and all) and its surrounding turf, allowing them to carefully and accurately re-sculpt the Mickey shape. After the crew installed new French drains on the bunker surface, they poured and then smoothed Capillary Concrete throughout the bunker.

While improving the bunker’s playability and ease of maintenance, Capillary Concrete also plays an important role in preserving the integrity of this legendary bunker’s unique shape. With the success of this project on the Magnolia course, golfers can anticipate Mickey-shaped bunkers on Disney’s Palm Golf Course, its Lake Buena Vista Golf Course, and its Oak Trail course, all scheduled for installation within the next year.