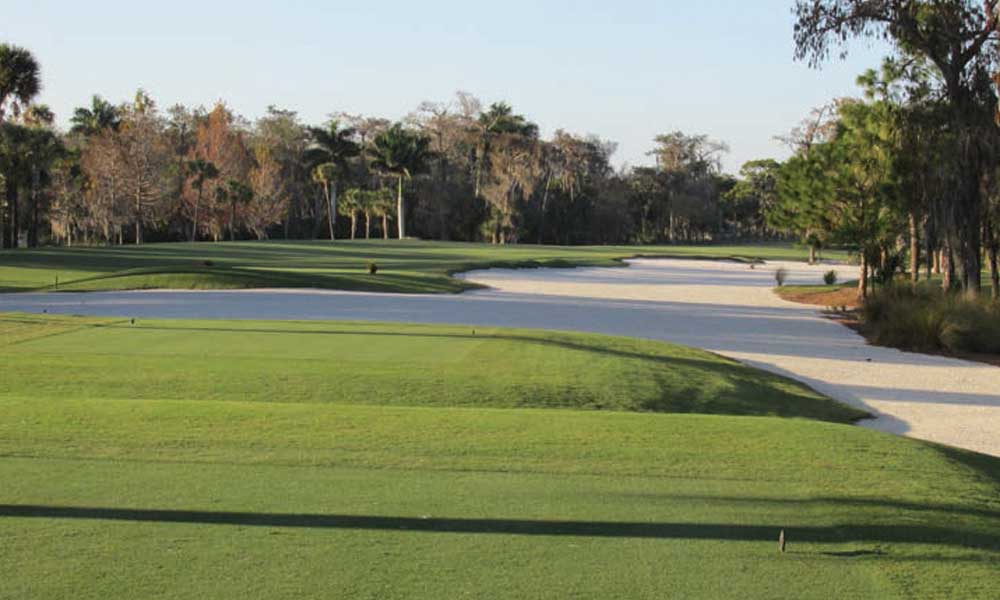 Ongoing renovations here in South Florida, at Wyndemere and Audubon country clubs, have helped pioneer the creative elimination and disguise of cart paths between tees and greens.

Architect Drew Rogers has delivered to both private club clients the recontoured putting surfaces, regrassed fairways and rebuilt bunkers one would expect from meticulous renovation work. However, in the process he has refined a method that replaces long stretches of formal cart paths with “back to nature” areas that feature crushed concrete byproduct (screenings) in place of poured concrete, or sand. Creative plantings effectively integrate these areas into the natural landscaping, while buttressing their screening power at fairway’s edge.

“I see this as part of a bigger movement to remove impervious material from these landscapes and better blend in a circulation pattern that looks like it’s part of a golf hole — instead of a bright white ribbon that runs tee to green that really, when you think about it, represents an obstacle,” says Rogers, founder and principal of Toledo, Ohio-based JDR Design Group (www.jdrewrogers.com).

“As I make clear to clients, this does NOT mean that all the cart paths are coming out. Around greens, for example, traffic must be strictly regulated and traditional cart paths serve that function. This application does not fit in everywhere. Let’s be perfectly clear about that. The proper setting must be identified first. But there are vast areas adjacent to many golf holes, especially here in Naples, that are already quite natural — a preserve, wetland or woodland. This cart path strategy is a great way to create far more natural transitions from highly maintained turf to upland preserve.”

Rogers has been working on this alternative cart path paradigm for a while now. It’s been deployed at several of his client clubs in Florida — indeed, Wyndemere GM Jimmy Lynn first noticed it while touring Royal Poinciana Golf Club, also in Naples, where Rogers is now executing the final stages of a comprehensive, four-phase, 36-hole renovation.

For golfers, the screenings offer a playing surface with enough “give” to play exactly like a traditional waste bunker. For superintendents, they require light maintenance on par with traditional sandy waste areas.

“I don’t like the fact that, with coquina, the color and particle size is so varied, whereas the crushed concrete — because it’s screened — is far more uniform,” Rogers says. “Also, the coquina tends to lodge in the cart tires and get dragged around the golf course. The whiter blend of the screening materials blends better into the sand tones, which is the undersurface in soils down here. When we enhance these areas with native grasses and other vegetation specific to south Florida, it blends in very well.

“That’s always the architect’s goal: to hide or disguise cart paths as best we can. We want to them to disappear to the golfer’s eye, to truly blend in. Hiding them with mounding is one avenue, but I think this a real step forward for this golfing environment.”

JDR Design Group is currently at work on a range of high-profile course renovation projects, inside and outside of Florida:
* In state, Rogers is directing comprehensive renovation programs at modern designs such as Quail West and Royal Poinciana on the west coast, and Mirasol on east coast.

* Up north, JDR’s long association with the H.S. Colt-designed Old Elm Club, in suburban Chicago, continues in 2015; he’s also at work at the Donald Ross-designed Kenosha (Wis.) Country Club, and a pair of Willie Park Jr. originals, at Sylvania Country Club in Ohio and Pine Lake Country Club outside Detroit.

At Audubon Country Club, in addition to the cart path initiative, Rogers is busy updating and transforming an original Joe Lee design. He’s working alongside superintendent K enyon Kyle on a two-phase bunker renovation, a major expansion of teeing grounds, and the regrassing of all 18 fairways with Celebration hybrid bermuda.

Down the road at 27-hole Wyndemere Country Club, Rogers and Lynn will conclude the recontouring of all 27 greens this fall. Miscellaneous tee work, continued “back to nature” cart path creation, and a full-on irrigation replacement will continue into 2016. The scope of the cart path project has only grown over time, as members have fallen in love with early returns.
“Drew did a real light plan at first, to give us a general idea of where he thought plantings and screenings should go,” Lynn says. “We dabbled with it the first year [2014] and gave members the flavor of what they could expect this year. We hit a home run with it — they absolutely love it. We’ve taken it to a whole other level around many of our tee boxes on the Green course. They look fan-tastic.

“Drew is so awesome to work with — a great eye, doesn’t waste time and checks his ego at the door… The new ’paths’ are just so practical. We don’t have to put irrigation heads in these new areas, so there is an elimination of expense there, too.”

“The practical maintenance aspect is something superintendents will appreciate,” Rogers adds. “Golfers appreciate the aesthetics and identity. They like to drive golf carts anywhere that doesn’t have a wall in front of them! So they find it appealing to drive through a big ’sandy’ bunker-looking area and peel off wherever they choose. But this accessibility gives supers more options, too. Traditional paths, with their curbing, are a lot like limited-entry points on traditional bunkers. These natural areas are so broad and expansive, you can better spread entry and exit — for golfer and maintenance traffic.”

Aerway: The Original. Nothing Better. Nothing Stronger.
Unplug with Solar Aeration
To Top