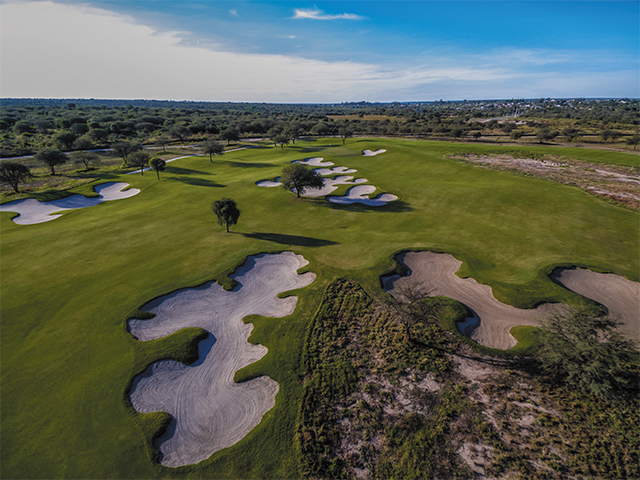 When last we saw Bobby Jones, Jr. he was basking in the afterglow of a successful and memorable U.S. Open at Chambers Bay, reaping in accolades for a high-energy renovation of Monterey Peninsula’s Poppy Hills, and finishing up his first course in Ireland, Hog’s Head, high on the cliff-tops overlooking gorgeous Skellig Bay

Cut to just under a year later, and Hog’s Head won Golf Magazine’s Best New International Course Award in a landslide, Jones is still criss-crossing the globe as spryly as he did when he was half his age, and golfers everywhere alternate marveling at his brilliance and his resiliency. Soon to be an octogenarian, Bobby doesn’t get older, but he certainly gets better, and Bobby’s company, RTJ2, is at the vanguard of the craft, blending artistry and strategy in his designs while using state-of-the-art maintenance techniques that save money and are environmentally friendly. Bobby’s designs still beguile golfers around the globe. From Italy to Ireland or from Baja to Beijing Bobby’s courses are both playable for everyone and irrepressibly fun. They are a reflection of his personality – a bon vivant. And he’s done it on every continent on Earth except Antarctica.

RTJ: Don’t tempt me, Jay because I’ll go download a topo map of the ice floes and radio McMurdo Station for a ride down there.

RTJ: Okay well we’ll have to use orange golf balls though, and we probably won’t get much roll unless it’s icy. Also, we’ll have to dress up in shirts and ties, because the penguins will be well dressed.

RTJ: Actually I’m opening a course perhaps as close to Antarctica as I’ve ever been. My latest design is in Argentina. It’s called Termas de Rio Hondo: Thermal Springs of Deep River in Spanish. It’s in Santiago de Tero, about an hour north of Buenos Aires by jet.

RTJ: While Buenos Aires and its surrounding area are generally flat, Termas de Rio Hondo is a high desert climate. It’s much like Madrid and Catalonia:  dry and arid. But this site also features many hot springs. It’s a magnificent site that Mauricio Macri, the President of Argentina, and Gerardo Zamora the regional governor of Santiago de Estero province are developing into a destination spot with  hunting and fishing and other outdoor activities.

JF:  That’s got to be a first for you, designing in and around hot springs?

RTJ: No I did some work in Japan early in my career. I think it was in Karuizawa Golf 72, because it was 1972. It’s two hours into the mountains from Tokyo. But it is unusual. The water from the hot springs is, of course, too hot to irrigate the golf course, but the Deep River is right there, so we use that cool water for irrigation.

JF: Tell us about some of the more interesting holes and architectural features.

RTJ: A number of holes have many different ways to play them, and so the par can be adjusted to whatever set of tees they set or whichever green they put the pn in since we have one hole with a two greens that alternate. On the sixth hole, it is either a two shot or three shot par-5 depending on where they place the tee markers. There is a central stand of trees and you must choose which fairway to take around them – the high road or the low road. With the tee markers back, it’s a true three-shotter, but with the tees forward it’s reachable in two.

Then at nine we build on that idea by having two greens  one of which makes the hole a par-4 and the other a par-5, The green complexes are markedly different; the par-4 green is a true punchbowl, while the par-5 features a strategic shot to a green placed right up against a barranca. They choose what green is in play by putting the flag in it, and that determines whether its a par-4 or a par-5.

Finally, on the back nine, the 15th hole can play either as a long par-3 or as a drivable par-4, depending on the tee placement.

RTJ: It is indeed.

JF: Have you been employing any of those ideas at any of he other new courses you’re working on?

RTJ: Well you know me, I like to be whimsical. I like to be avante garde. For example, right now, you’re reaching me in Baja, Mexico at Costa Palmas. I’m doing 18 new holes, nine by the sea and nine inland. Again a beautiful dry arid site, but also oceanside.

JF: Baja and Cabo in particular are unusual like that. They have desert aridness right on the edge of the ocean.

RTJ: They do. Right now we are on the eastern cape-area, about an hour and a half northeast of Cabo San Lucas. It’s a little remote, but there’s a marina with great sport fishing.

JF: What’s the golf course like? When will it open?

RTJ:  The nine holes on the oceanside are already planted, and the entire course will be in play next year by June 1. The course plays along the dunes. It’s a spectacular setting.

JF: Are there any ideas here that are similar to to the flex ideas of Argentina

RTJ: It’s funny you should ask that because we are debating whether number seven is a par-4 or a par-5. We decided to make it a par-5 crossing an arroyo, very similar to crossing Hell’s Half Acre at number seven at Pine Valley or the wasteland at number 17 at Baltusrol. Those are direct influences there. But also like those holes, you can hit out of the hazard, and we wanted to make it playable out of our arroyo too.

And then we just finished a remodel of nine holes at Oxbow, in Fargo, North Dakota.

RTJ: Right first time! In this case the Red River, a tributary into the Missouri.

Oxbow was an exciting course I designed originally in the 1970s. But the Red River floods and the club decided it might be prudent to move the nine holes in the flood zone. So they asked the Army Corps of Engineers to make a recommendation, and the Army Corps suggested that the holes in the oxbow be moved into the prairie lands right above the oxbow. So I got to build nine entirely new holes, and they put a new clubhouse up there too.