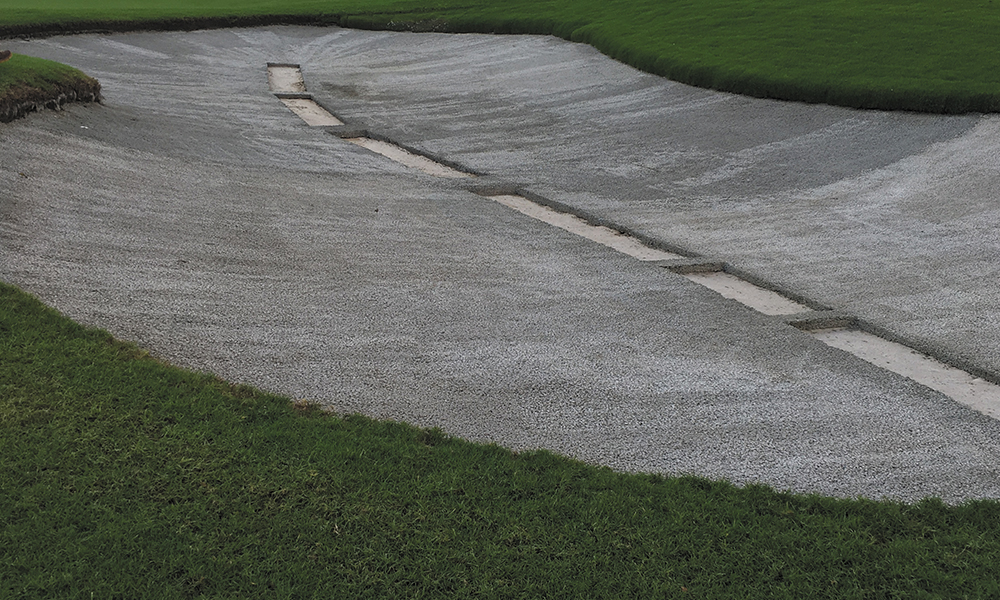 I’m standing on the tee on a 200-yard par-3 that plays downhill to a bunker-guarded green. And, even though I’ve played the course a dozen times or so, today something looks very different. “I don’t remember there being ponds on this hole,” says Ben, my playing partner. I take a closer look at the green complex and notice that there is no sand in sight. Instead, the “pits” are full of water; unplayable little vestibules that yearn to swallow anything whole. “Ah, yes, here we go again,” says Ben. “Three inches of rain last night and the bunkers are swimming pools. At least it’s a free drop.”

Unfortunately, as every superintendent knows, there is nothing “free” about bunker maintenance. It’s one of the most expensive, money-draining aspects of golf course maintenance. In fact, per square foot, there is no other area of the golf course that costs more to maintain. And, for decades (perhaps centuries!), the problem of bunker drainage has been a thorn in the side of golf course superintendents around the world. However, one company, thanks to their vertical-chamber drainage systems, is changing this problem once and for all. They are called Atlantic Installations.

“Bunker drainage hasn’t worked properly for sixty years,” says Willie Burton, the President of Atlantic Installations. “French drains fail continuously. Horizontal drainage systems have cost the golf industry millions. Our vertical drainage system changes all of that. We have had courses use our system for over fifteen years without a single failure. The system is designed so that even in torrential rains drainage won’t be an issue. Golfers can get back out there almost immediately and have playable bunkers. Instead of closing the course for a few hours, a day, or longer, golf courses can keep their revenue streams flowing. Installing our vertical chambers can pay for itself in a very short period of time. And this system also works beautifully on fairways.”

Based in North Myrtle Beach, South Carolina, Atlantic Installations, a relatively small company that employs about a dozen people, give or take (depending on the size and scope of their current projects), is a golf course renovation company. Although they do complete golf course renovations, they specialize in bunkers and drainage solutions. Their goal is to minimize recovery time after a rain event and make sure revenue losses are at a minimum after storms or during the wettest months. And key to all of this is their patent on their unique, vertical-chamber system.

Essentially, bunkers fail because of the use of gravel or stone under the sand. After each rain event the fine sand particles move downward and clog up the spaces in the gravel. Eventually, water flow to the drain pipe is blocked off. This causes the bunkers to flood and the native soils move upward. And, in turn, along come the headaches and the costly, time-consuming process of draining, digging, pumping, and so forth. It can be an endless cycle.

Atlantic Installation’s approach eliminates all stone in the bunkers and, most importantly, eliminates clogging. To cut to the chase, the system is on a vertical plane. The chamber system, which is lined with a geo synthetic product, is positioned vertically and this keeps sand from migrating into the sidewalls. These patented “Quickplay chambers” have a larger effective infiltrative area and can handle as much as 100 inches of rain per hour.

“Regardless of what type of environment your course is situated in, monsoon belt, sand belt, a rain forest, you name it, this system will do the job,” says Burton. “Time is money in this industry. And when golf courses are closed because of standing water and drainage issues, my temperature goes up. Most of these situations are avoidable. This system typically pays for itself in months, not years.”

Mark Nykorchuck, Golf Course Superintendent at The Founders Club in Sarasota, Florida, is one of a fast-growing list of superintendents who would agree. “We installed the vertical chamber system in dozens of bunkers in 2003,” says Nykorchuck. “And they have performed exceptionally well. We had a rain storm a few weeks ago with over 15 inches of rain and we were back out playing almost immediately after the rain stopped. There was no standing water in any of the bunkers where we installed the chambers. The vertical chamber systems that Atlantic Installations installed have worked for many years now. Put it this way, after a storm, and we get a few, I’m not worried about standing water. These systems come as advertised.”

“Bunker drainage isn’t all we do, though,” says Burton. “We install artificial turf, which is definitely a growing business for us, and basically do any type of golf course renovation work that courses require. Often we’ll take on a project and kill a few birds with one stone. It’s a cost effective way to do business. However, bunker drainage is where we really have a competitive advantage.”

My partner and I play on and try to make the best of the situation with the “new” and “unimproved” water-filled bunkers. I hoist a five-iron into the air and Ben immediately calls for it to hurry. To no avail. My ball plunges into the black hole of water guarding the front right of the green and is gone, perhaps, forever. “Might need your water wings to retrieve that one, pal,” he quips. I mutter something unpublishable and we start the journey along the puddle-peppered pathway to the green.

Without a doubt, there will be many golfers playing this day that will hit their ball into a bunker-turned-pond and utter a few choice words in the process. It’s an aggravating situation for golfers and superintendents alike. Of course, given the state of the golf course, we probably shouldn’t have even been out there in the first place. Thankfully, I think, we were both given a discounted green fee rate based on the condition of the course.
“Be nice if they had a magic solution for bunker drainage,” says Ben. “Like a snap of a finger and, poof!, it all disappears.”
“Well, Ben,” I reply, “as a matter of fact…”