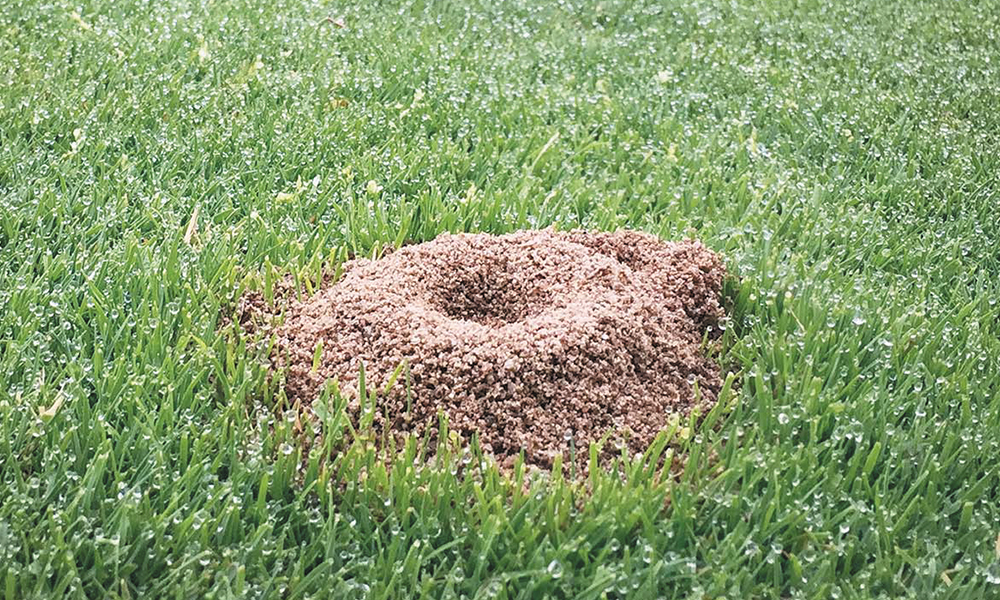 Lasius neoniger, commonly referred to as the “turfgrass ant,” is a minute (about 2 to 3 mm,), tan to black ant that is seemingly ubiquitous in open fields and turfgrass sites across cool-season growing regions in North America. Ants are present throughout the year, although they only truly make their presence known as the colony grows in the early days of summer and as mounds appear within the interior portions of greens, tees and fairways.

Managing turfgrass ants is difficult at best, since many superintendents report unsatisfactory control with insecticides. Additionally, it is believed that turfgrass ant issues have intensified dramatically since the 1990’s, since broad-spectrum insecticides used in white grub management have been phased out (e.g., organochlorines) and newer, more selective insecticides (e.g., neonicotinoids and anthranilic diamides) have taken their place (Werle 1999).

Despite their obvious downsides, turfgrass ants play a vital role in the functioning of a healthy turfgrass environment. What is often forgotten is that these insects are tirelessly at work, churning the soil and reducing some of our more common turfgrass insect pest populations. Clearly, controlling these nuisance ants comes with trade off’s.

The turfgrass ant is the most abundant ant species in cool-season turfgrass growing regions in North America, outnumbering all other ants in open fields and full-sun areas with well-draining soils. Any given turf site may have several species of ants present. However, the turfgrass ant is one of only a few species that creates visible mounds in turf sites.

Turfgrass ants produce mounds that are small (5 to 10 cm in diameter,) and volcano-shaped, whose numbers fluctuate throughout the season in response to increases in colony size. Mounding is most severe in close-cut, sandy areas (e.g., modified sand-based putting greens). These areas are often prone to intense mounding since workers can more easily excavate the coarse soil compared to native soil surrounds.

Not only are the mounds an aesthetic problem, but also the turf underneath the mound is lost when smothered. Mowing over the mounds may disperse the soil, but it can also damage equipment by dulling the reel or, in extreme cases, clogging the machinery. Mounding can also affect the uniformity of— and ball roll on — the putting surface.

Ants, like some bees, wasps and termites, are social insects. Social insects live in a nest or colony and have overlapping generations and a specialized labor force. Some members forgo their own reproduction (sterile) to benefit the colony. From a pest-management standpoint, ants are difficult to control since their task specialization allows for maximum reproductive output and offspring survival. Successfully man-aging turfgrass ants requires an understanding of how populations develop throughout the year and then exploiting weaknesses in the colony.

The formation of a colony begins in late summer when winged reproductives (virgin males and females) leave an established colony. Synchronized swarms can be observed flying or walking in open turf areas (Wilson 1955). Afterwards, mated females can be observed walking across the turf looking for a site in which to dig a nest and start a colony. Prior to, or shortly after entering the nest, she will break off her own wings, settle down for the winter and possibly produce a small batch of eggs.

If the queen is lucky enough to survive winter, the first batch of larvae is produced. The larvae develop into female workers that will forage for the colony’s food. However, these offspring are much smaller than workers found at other times of the year, since the queen is incapable of foraging and must feed her offspring a nutrient-poor diet of saliva. There-fore, the colony grows slowly and is susceptible to die-off in spring.

Mounds become visible in late spring as larger workers are produced and foraging increases. The queen is located in the main nest, usually in the heavier, native soil surrounds. The main nest consists of relatively shallow, open chambers that may lead to side tunnels to the surface. Over the next few weeks to months, secondary or satellite mounds open on the tees and putting greens as subsequent generations of forage workers are produced due to a result of an improved diet. It is estimated that greater than 90% of the satellite mounds are located within 1 to 2 meters of the green-rough interface (Maier and Potter, 2006).

The short turf allows the workers to forage over a greater area, removing small prey (insects and other arthropods) that may have been injured or killed by mowers. Foraging and colony growth will increase throughout the season, although it may experience a plateau or even reduced mounding as mid-summer approaches. Mature colonies may exist for several years, producing virgin queens that may form their own colonies at the end of every summer.

Superintendents attempting to control ants after mounds appear (curatively) become frustrated when suppression is short-lived. Product timing and selection are important, but meaningful control can be achieved only if the queen is killed. Without the queen, the colony plunges into chaos and will perish. However, targeting the queen is difficult because contact insecticides do not penetrate the nest, and delivering insecticide through the use of baits has shown limited prom-ise in turf. Attempts to control new queens upon emergence with contact insecticides has shown promise, although the time in which the queens are exposed is variable and may require multiple applications (Maier and Potter 2006).

Given these challenges, reducing the flow of energy into the colony during slow growth periods remains the most viable option for mound suppression. Contact insecticides (particularly pyrethroids) are commonly applied to the surface of active mounds in late spring or early summer to reduce foragers. Contact insecticides, though often providing a quick knockdown of mounding, may provide only 7 to 14 days of suppression, or just long enough for larvae in the colony to mature and replace foragers that were killed. This strategy may be more effective when applied earlier in the spring when mounds first appear and workers are small and few.

Neonicotinoids, like thiamethoxam and clothianidin, can also be effective in reducing mounding, but reductions are not immediate, typically occurring one to two months after application. Applications of neonicotinoids or combinations of a neonicotinoids and a pyrethroid in the fall and/or early spring (when colonies are weakest) have demonstrated to be most effective at providing long-term control (Shetlar and Andon, 2012).

Controlling turfgrass ants may have indirect effects on many of our other insect pests. Any insecticide application, but especially broad-spectrum insecticides, may have unintended consequences on other insects, including beneficials.
Secondary pest outbreaks occur when a pest population that has been controlled by a predator population is allowed to out-break with the removal of the predator.

Ants are ferocious predators of small insects, including some of our most devastating turf insect pests. Several studies have shown that turfgrass ants are egg predators of sod web-worm (Cockfield and Potter, 1984), black cutworm (Lopez and Potter, 2000) and white grubs (Zenger and Gibb, 2001). It is not surprising that turfgrass ants can reduce these pest populations, since the rapid growth phase of turfgrass ant colonies often coincides with the pests’ oviposition periods.

Recently, I have heard many anecdotal stories of ants controlling annual bluegrass weevil populations. The annual bluegrass weevil (Listronotus maculicollis)(ABW) is a widespread (and spreading) problem on short-mown turf from eastern Canada to Ohio and North Carolina. Given that ABW egg and larval populations peak during ant-colony growth phases and that they occur in similar areas on golf courses, it is quite possible that turfgrass ants impact ABW populations.

However, the suppression of ABW populations by turfgrass ants is speculation. I am somewhat skeptical in the ability of ants to provide moderate or meaningful impact. For one, ABW possess many cryptic or hidden stages that may be protected within the plant from an ant attack. ABW chew notches in the stem of the plant to deposit eggs underneath the leaf sheath, unlike the aforementioned insect pests that lay eggs loosely in the soil, thatch or leaf tip. The impact that ants have on young larvae is also questionable, as early instars are stem borers and thus protected within the plant.

In summer 2015, the Turfgrass Entomology Laboratory at Penn State initiated several studies on turfgrass ant management. In particular, we are interested in documenting the impact that turfgrass ants have on ABW populations and if ant populations warrant conserving in high-value turf areas. Additionally, studies have been initiated to explore the effect of soil modification practices on colony establishment, survival and mounding. We hope to have preliminary results by early 2016 and, more importantly, some insights into managing ants or at least finding tolerable thresholds for coexistence with these amazing creatures on turf sites.