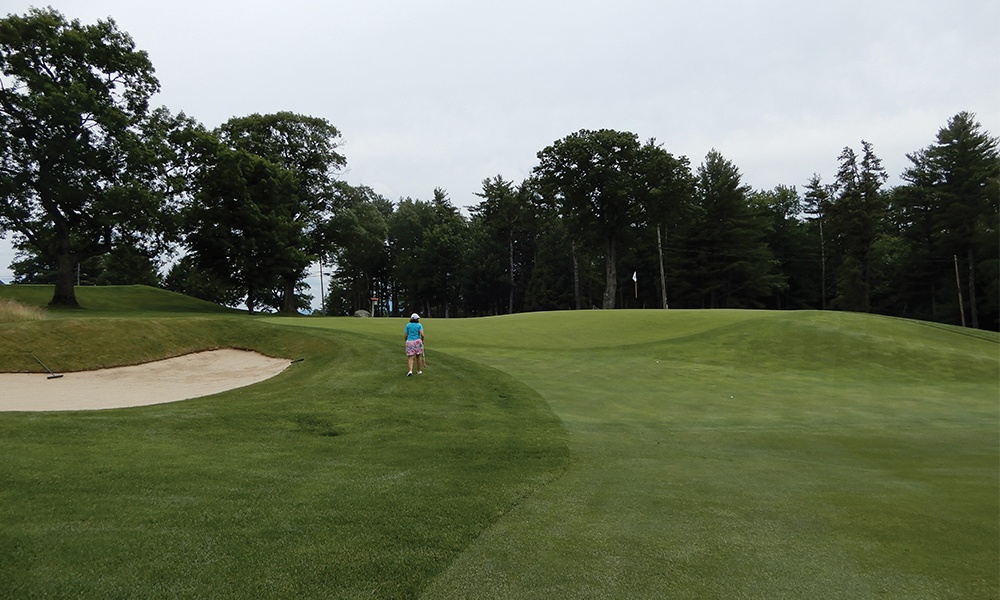 As readers of this column recall, we recently profiled two superb New Hampshire golf clubs: Baker Hill Golf Club (last month) and Lake Sunapee Country Club winter of 2020). But no discussion of great New Hampshire golf is complete without what may be arguably the best course in the state – Bald Peak Colony Club.

The year was 1921, and quintessential American golf architect Donald Ross was in full ascension. He opened not one, but three designs that year – Bald Peak, the Mid-Pines Resort in Pinehurst, North Carolina, and Teugega Country Club in his hometown of Rome, New York. (Ross was even engaged to a woman from Rome, but their wedding was thwarted by her untimely death soon after their betrothal.)

While in North Carolina and also as a member of the “Tin Whistles,” (the oldest golfing society in America, continuously running since 1904), Ross befriended Bald Peak’s founder, Thomas Plant, and together they built the golf course, which will celebrate its centennial next year, so as to allow more people to attend what might otherwise have been hampered by the Coronavirus pandemic.

It’s clear from the historical record that while a great many of the courses that bear Donald Ross’s name may or may have not have had the transplanted Scot overseeing both design and construction of the golf course, at Bald Peak he was onsite consistently throughout the build. Better still, nearly everything that Ross designed still remained when golf architects Ron Forse and Jim Nagle showed up eight-and-a-half-decades later.

Bald Peak is an architectural triumph. It plays far longer and bites much harder than its 6,515 yards indicate on the card. It rumbles over heaving terrain, ascending to dizzying heights at times, cascading thrilling downhill at others. Its greens are protected by ferocious internal contours and even fiercer false fronts or sides. And its asymmetric par71 routing ends with a fascinating par-5, par-3, par-5, par-3, par-5 sequence – perhaps the only such course in America to close with such routing and definitely bringing the round to a rousing crescendo.

Best of all, it has been relatively untouched for the entire 100 years of its existence. No other intervening architects erased the Golden Age features and strategic hazards that Ross so cunningly used to protect a mere 6,515 of golf course.

“Perhaps no other course that Ross designed uses mounding as hazards perpendicular to the line of play so often as Bald Peak…in fact there are very few courses anywhere period that use mounds so prominently, and bunkers so sparingly,” stated Jim Nagle, the Forse design partner who oversaw the most recent project for the firm. “He used the mounds as a defense or hazard on so many holes, and he varied the size, shape, and angle of them from hole to hole, giving Bald Peak a wonderful, inimitable character.”

Indeed, the mounds command the golfer’s attention from the opening tee shot. Options abound at this diminutive, but deceptively difficult 298 yards par-4 first hole. Better still it’s all downhill with a tongue of fairway tucked behind a massive hillock that intersects the fairway diagonally. You can lay back short of the hazard, play around it, or you can try to carry it and reach the green, but anything right means playing your approach out of thick rough, rugged mounds, and uneven lies to a curvaceous green without much room to stop the shot. Suddenly that short 298-yard par-4 has you snarling and writing a bloated number on the scorecard angrily.

The brilliant utilization of the mounds and berms as a defense may be what catches the eye of seasoned golf architecture experts, but it’s the collection of par-3s at Bald Peak that delights everyone most of all, from casual golfers to Ross aficionados.

“All great classic golf courses are measured by the quality of their par-3s, and all five of Bald Peak’s par-3s are absolutely phenomenal,” Nagle noted firmly. He’s right. Whether it’s the drop shot the fifth set in an idyllic little dell at one corner of the golf course, the devilish 17th with one plateau of the green set precipitously three feet above the others and dropping off steeply on all sides, or the iconic “Battleship” green at the 12th.

Ah yes, the Battleship, also called a “Volcano hole” or a “2 and 20 hole” in the parlance. Walter Hagen and Bobby Jones coined the term first at Long Island’s Engineer’s Club, but it’s used to describe any minuscule par-3 defended by a hazard so gargantuan and penal, “You either get a 2 or a 20 on it.”

“There’s no bail out at the Battleship,” warned Nagle. “There’s no sand, but there’s a deep gully and rough-filled depression that also contains two berms! It’s all carry to a plateau green completely encircled by bad trouble.”

The Battleship was actually a favorite template design Donald Ross used throughout his career. Other celebrated examples include the third hole at Wannamoissett, the second hole at Irondequoit, the sixth at Country Club of Buffalo, and the fourth at Berford Springs Resort.

Over the course of three different projects spanning a gap of 18 years, the assembled team including select members and staff of Bald Peak, Forse Design, and most recently MAS Golf, rebuilt all the bunkers on two occasions, expanded all the greens to the edge of the green pads, widened fairways, and added forward some tees that are actually placed in the fairway, (blending seamlessly with the rest of the golf course), while adding 250 yards of distance with new back tees on a mere four holes. The newly constructed forward tees reduced the playing yardage for those golfers by nearly 700 yards. The team added an entire practice facility with a short game area, and even engaged in tree management via something the club calls a “Forestry Management Plan.”

Bald Peak is required reading for anyone studying the architecture of Donald Ross. Its design is both a sharpening of many of Ross’s earliest design philosophies, yet also a springboard for other ideas that he would use going forward in his career. Lovingly preserved for a century, it now looks and plays better than it ever has in its history, while also being true to its precious architectural heritage. It’s also the kind of golf course that modern designers need to emulate: short enough to play quickly, with wide fairways, but fascinating green complexes with wild contours.

“It’s still one of my favorite places I’ve ever had the privilege to work. The excitement is palpable: from the drive on in through the white-capped mountains overlooking the lake, to the moment you enter the grounds with the majestic oaks lining the entranceway to the gorgeous early American summer retreat-style clubhouse,” recalled Nagle. “And the excitement just builds all the way around the golf course to an incredible crescendo at the end. Without a doubt, this is one of Ross’s best and most unsung designs. We were grateful to have a chance to steward it into the 21st century.”

At Desert Mountain, The Grass Truly Is Greener
Hartsbourne Makes Investment in Its Golf Course Bunkers
To Top