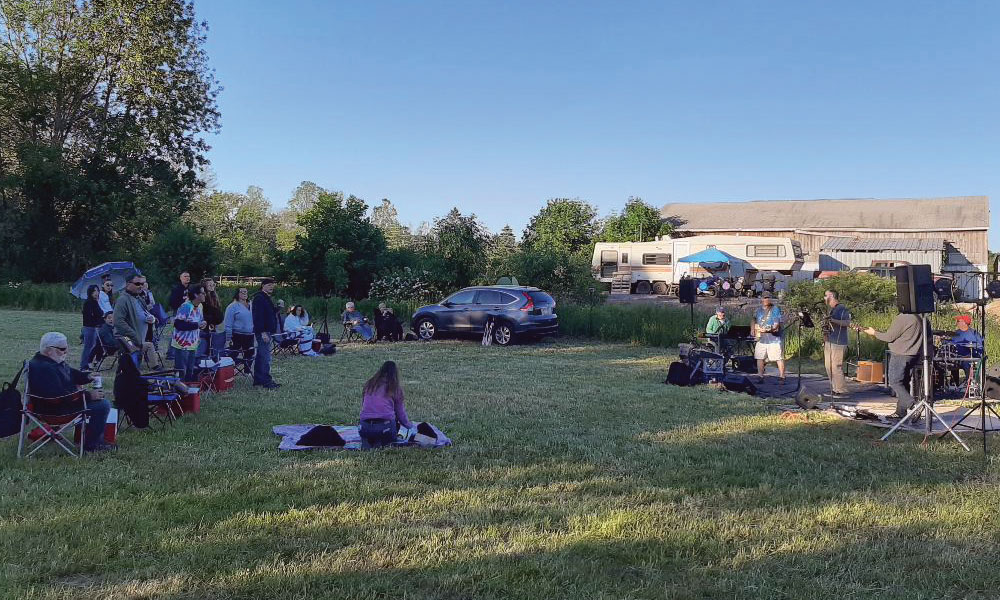 But both as a lawyer and as a journalist, Your Author has learned one inescapable truth: in uncertain times, the best things to do are watch, listen, and carefully consider. So we at Golf Course Trades have had our ears to the ground and eyes wide open, at both the private and public level, from small mom and pop operations to the multinational corporations. Here’s what we’ve heard so far, keeping in mind we are just beginning to acquire and analyze feedback. But at least we have good news to report.

“We have big plans,” beamed an ebullient Phil Furfari, part-owner of the family-run Winged Pheasant Golf Course, a 27-hole facility between Syracuse, New York and Rochester. “It was easy to implement the Covid-19 protections, and we’ve not only been open and reasonably busy, but the new expansion projects are proceeding apace.”

We visited Winged Pheasant back in 2017. Back then “Phil and Phamily,” (as their “phriends” call them…it really is a mom, pop, and sons operation…oh, and old Aunt Helen too…), back then Furfari had just opened a new nine holes called the Roc, the longest and toughest loop and now the flagship routing. Things have gone swimmingly since then and even despite the Coronavirus pause, they have not just survived, they’ve thrived.

“We are just finishing the new 250-seat grass amphitheater for concerts and movies. It’s located on the course, just to the left of the 12th tee. We also have a stud farm so kids can pet and feed horses and donkeys, and we will also be screening movies either at the new amp or on the side of the aircraft hangar we have on-premises. We can turn that area into a golf cart drive-in movie theatre.”

“Crescent Amphitheatre” is the new venue’s working title, and should open late this summer. In the meantime, Furfari held a dry-run of a rock concert on private land nearby do see how successful a “socially distanced” rock concert could be. About 200 people saw Grateful Dead cover band Delilah Jones play and now, three weeks later, there wasn’t a single case of Coronavirus reported. Everyone had a great time and observed all the social distancing rules.

Other public courses are also trying non-traditional ways of generating income streams. Willow Running, an upstate New York road racing outfit has been working on sponsoring races but also offering post-run rounds of golf at excellent courses nearby as a package deal. Already they are talking to courses as far north as the Canadian border, as far west as Rochester, and in quintessential, idyllic Adirondack resort towns such as Old Forge.

“It’s still early in our season, (before Father’s day is still early for us, because we’re so far north), and we did lose all our Canadian play since the border is closed as well as our two big spring charity tournaments,” explained Mark Benz, a PGA professional and Director of Instruction at Thousand Island Country Club. “But we are looking to reschedule those events, and look forward to hearing lots of ideas like Mike’s that will be new revenue streams for us to explore to make up for the downturn in food and beverage and parties.”

“We’d love to work with Mark and TICC. We’re also approaching Thendara in Old Forge and Green Lakes or Timber Banks in Syracuse. Runners could run any number of distances from 5k to a half marathon, then cool down with some golf,” agreed Mike Samoraj, Willow’s founder. “Running and golf are perfect exercise regimen partners.”

Still other clubs are doing what everyone is supposed to do during tough times – I don’t care whether a billionaire with a butler or Irving the tailor on Bleecker Street – you ride it out!

“We have a tiny 9-hole course far off the beaten path in upstate New York. I can’t say we’re really busy, but we are chugging along,” said a plucky Marie Bamberger, the mom of mom-and-pop Camroden Golf Club in Rome, New York. “The time off gave us the chance to experiment with new drainage techniques – we’re a clay-based course and severe spring rains are problematic. So that was a plus. Yes, we lost cart, tournament, and event revenue, but we have a loyal golfer base, almost rabid. There’s no stopping them except for an asteroid hitting the course. And best of all, this crisis also brought out the good in everyone in our area. People regionally are propping up local establishments. So thank you.”

And finally, there’s Crestwood, whose remarkable resurrection and rescue from near death at the hands of the misguided (and many sources say stingy) prior owner, Alfred Park was chronicled by GCT archives.

Happily, their parking lot was filled to overflowing when we visited this week – every single space was taken and even more, cars were parked temporarily on the entrance lawn.

“The leagues are still here and the course is in fantastic condition. We all need something to do to get outside, and the rules regarding social distancing are easy to comply with,” golfer Pat Markeson gushed energetically. He’s been a regular at the club for decades, even though the lean years, before white knights, the husband-wife-and-family-team of Steve Nascewicz and Parb Presky bought the course in 2011 and turned it back into the region’s flagship purely public facility. “Steve and Barb saved this club from Alfred Park,” Markeson added proudly. “Coronavirus doesn’t stand a chance.”

Private courses face some challenges, though no less daunting. Some private courses do not allow golf carts and have caddie programs. These clubs have taken a hit, especially when you add the loss of food and beverage and events. Worse still, some states such as New Jersey took longer to open than many other states, and when golf finally was allowed, is was with significantly fewer players. And finally, some clubs are losing non-equity members since those members may have taken a considerable disposable income hit in the short term.

“At Bayonne we don’t have carts, you have to walk. And because we weren’t allowed to use caddies for months, we lost a lot of play since some members don’t have the endurance to carry,” explained course owner and designer Eric Bergstol, whose company Empire Golf owns just under a dozen clubs up and down the eastern seaboard. “And when we finally could reopen, we could only start two golfers every 16 minutes. That’s eight golfers an hour. But now it’s improving.”

“I wouldn’t say financially our club is fine; like many country clubs, we lost a tremendous amount in food, beverage, and tournaments. I think we’ll see 1/5th of the revenue we usually see. Not that it won’t come back – it will – but it will take a while,” agreed one private club Head Superintendent, who spoke on condition of anonymity. His club has still seen full tee sheets – whether at 16 minute intervals or now 10. Known nationwide for its downright tremendous food, the club’s ethnic cuisine nights have – thankfully – kept takeout service busy, and drive-in movie night where everyone brought their kids to watch a dinosaur flick from their cars proved wildly popular as well.

“No touch golf – as in no rakes, no ball washers, no water cooler stations, no touching flags – has been easy. And we overcame the social distancing challenges in operations without much difficulty. It was more an annoyance than anything else,” added our source. “Thankfully, they are now allowing two people per cart, because four carts per group was putting far too much the extra traffic on the turf.”

Happily, many private club members are proving every bit as doughty and loyal as their public counterparts. Country Club of Farmington head superintendent, newly brought over from Yale Golf Club, was downright bullish on golf’s return.

“We are doing excellent. It took a little while to get the wind in our sails, but now we are going in to the summer with it at our back,” he confided eagerly. “The membership is strong and we are spending money on the course. We are jammed. I thought this was a sleepy little club, but it’s buzzing with full tee sheets. We were worried we might have to downsize, but golf is the one of the only activities our members can do, so they are flocking to the course.”

“I’ve never seen so many people on the golf course, and all our board members from across the country are saying the same thing,” stated GCSAA president John Fulling, Jr. “Not only are new people taking to the game in droves – it’s one of the only things we could do in this pandemic – but I think finally a larger portion of them with stay with the game.”

Apparently new memberships in golf clubs are actually keeping close to the number of memberships given up by non-equity club members, but we’ll need more time to see if that holds going forward.

“Some clubs are losing some members, and yes the hit to food and beverage at private clubs, especially smaller ones, can be substantial – $300,000 to 500,000 per year in some cases, began Fulling, Jr. “But the upturn in other areas like takeout and other new revenue streams is doing a good job of helping clubs hold steady.”

How many courses have we lost thus far, if any, do to the downturn? Fulling has not heard of any yet, and neither has Your Author.

“What I can say is we thought this was an absolute disaster, but golf turned out to be the public’s perfect outlet instead. It natural has Covid-19 protections built in, and the restrictions are easily adaptable by clubs. Best of all, we have not heard of any clubs saying they are having problems with course conditions deteriorating. Maintenance crews are now at full capacity.”

It’s clear golf is back And in high gear: not because the pros are on TV again, but because the spirit of the rank and file American golfer is unquenchable. Or maybe the game is just irresistible.

[Author’s Note: Do you have a golf course COVID-19-related story to tell the world? Email us at Sharon@thetrades.com.]