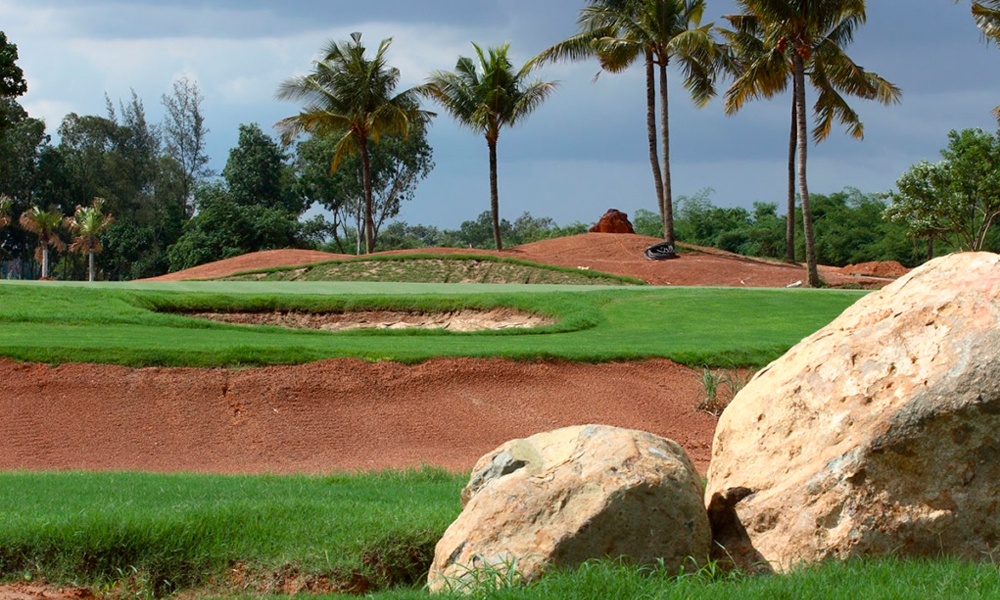 HO CHI MINH CITY ‚ The course architects at Golfplan have stepped up construction of 18 resort holes here in the Vietnamese capital. Jeong San Vina Golf Club takes up unique residence on an island in the Saigon River, directly between the city’s expatriate district and its new international airport.

The course at Jeong San Vina GC will stretch out along a man-made waterfront that Golfplan will outfit with a 50-meter natural buffer and overarching tropical garden landscape. The golf will serve as anchor to a high-rise condominium and hotel development overlooking course, river and city.

“The plan is for Jeong San Vina to be very high-end but still very accessible resort facility, which is just what the golf culture in Vietnam needs,” said Golfplan partner David Dale, who expects the course to open for play in late 2011. “When the hotel component is finished, it will function as an urban golf resort, and there’s nothing like that in Ho Chi Minh City today.”

Dale and the Korean development consortium backing this project, Taekwang Vina Industrial Co. Ltd., have been poised to begin course construction in earnest for better than a year, but a series of factors had slowed matters until this spring. Most important, the bridge linking the island with the mainland ‚ Ho Chi Minh City’s District 2, just north of downtown ‚ was not completed until March 2010.

Secondarily, all course development in Vietnam had been clouded somewhat during 2009 by lingering land-use, environmental and economic issues. This winter, however, the Vietnamese Government issued a broad suite of golf course development guidelines that went a long way toward legitimizing and codifying future development here. Decision 1946, issue in January 2010, regulates the number of courses that can be developed in Vietnam, without strict caps, while implicitly endorsing golf tourism for the first time. It also stipulates the type of land that can be made available to golf development going forward, while delineating a developer’s obligations to former landowners, the environment and local economies.

In reality, Jeong San Vina’s progress was additionally complicated by the extraordinary engineering efforts the site requires. According to Dale, more than 1.5 million cubic meters of fill were required to build up the site and in some ways “create” the waterfront landscape.

“All of this sand was dredged from the Saigon River north of our island, then transported by boat and pumped onto the site in a watery slurry, which is spread around the property by a network of giant piping,” Dale explained. “It’s a pretty impressive process. There were some 20 cubic meters of fill per boatload. Do the math. When you do, you can understand why it’s taken two years to complete the reclamation.”

Spreading the fill around this site, in the context of golf construction and shaping, is nearly as complicated as getting it there. According to Dale, because of the very high water table, no more than 4 meters of fill are allowed anywhere on the site, lest that spot recede. “This is not the sort of project that can be improvised in the field,” Dale said. “The grades of our architectural drawings must be extraordinarily precise, and each green site will be supported by pilings to support and reinforce elevations that will exceed the 4-meter limit.”

Dale and his colleagues at Golfplan have designed some 150 golf courses in more than 50 different countries, and the firm has developed a reputation for tackling some of the most complicated engineering projects in golf. Jeong San Vina is Golfplan’s second project for this particular client; the other ‚ Jeong San Country Club in Kim Hae City, South Korea ‚ sits comfortably in a stunning, mountainous environment. You’d never know that millions of cubic meters of earth were cut from one part of the site and used to fill another, to create the award-winning 18-hole playing surface.

At the other end of the spectrum, Golfplan is the firm that dredged Singapore Harbor to create the man-made acreage that under-girds the famed Serapong Course at Sentosa Golf Club.

“At Sentosa, we were reclaiming mangrove swamps and a portion of Singapore Harbor, but the exercise there ‚ and here at Jeong San Vina ‚ are comparable,” Dale said. “We took a similar approach at Oulu Golfklubb in Finland, home of Nokia and one of the northernmost golf courses in the world. There, we reclaimed peat bogs and used a geo-tech style sheeting to create a floating pad to support the sand fill on 27 holes. There is no need for geo-tech sheeting in Ho Chi Minh City but you can see we’re pretty darned experienced in engineering these types of courses.”

Jeong San Vina will play 6,595 meters from the championship tees and feature a diverse mixture of bunkering, from enormous, sandy waste areas that tie into greenside hazards, to the free-standing bunkers that dictate strategy in the fairways and off the tee.

Bordering and intervening on those fairways are (as you might expect from a golf course reclaimed from a river bed), a bewildering array of water hazards. Six holes at Jeong San Vina skirt or require the crossing of freshwater lakes, while 7 more incorporate wetlands features. The par-4 9th and the par-5 18th wrap their way around the same lake and terminate at the same, shared green, which will ultimately spread out before a lavish, contemporary clubhouse.

“It’s a beautiful finishing flourish, not unlike what we created at the Serapong Course, or what Pete Dye created at the TPC Sawgrass in Florida,” said Dale. “But the beauty and compelling strategy of the golf holes must work in the context of practical environmental matters. The wetlands at Jeong San Vina, for example, were created so that when the river rises to its highest point, water will be accepted onto the course site and into this network of wetlands. It’s a very attractive, totally golf-centric form of stormwater retention capability.

“What’s more, our lakes are set higher than the wetlands. When the lakes overflow, they release into the wetland network.”