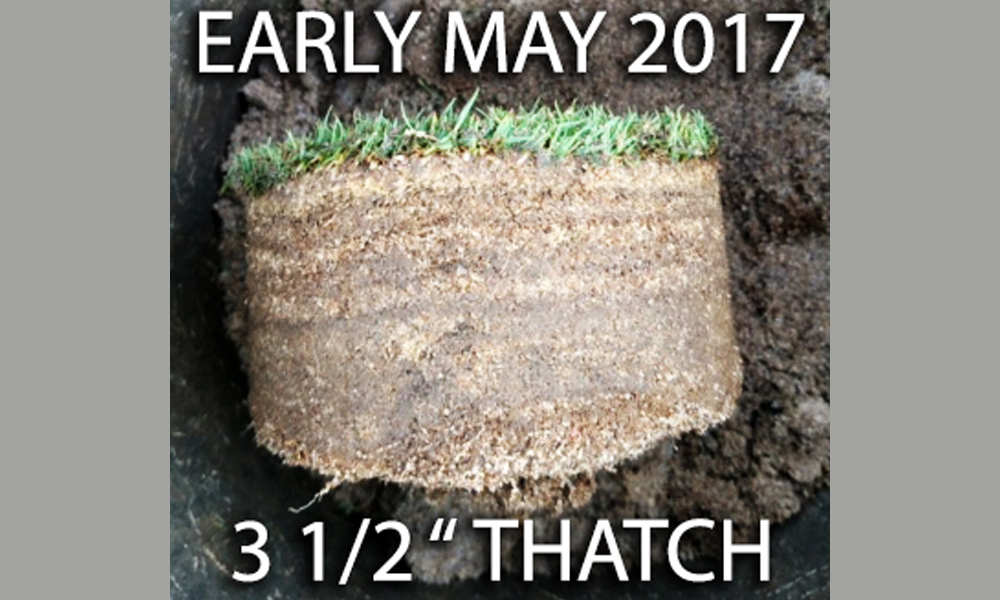 Last spring, agronomist Mike Kipper was visiting a golf course when he glanced into a gator full of turf plugs. The plugs showed 3 inches or more of thatch, and their condition and quantity piqued Kipper’s curiosity. When he discovered that the plugs were from the course’s greens, he knew that a rescue operation was in order.

The bentgrass greens at the course had been on a quick-release nitrogen diet for far too long. The excessive growth made the greens look good initially, but after a few short years the accumulation of dead roots, rhizomes, and other undecomposed organic material created a thick layer of thatch which was suffocating the greens.

The course superintendent was attempting to fix the problem by pulling plugs from the bad areas and patching the greens as best he could, but it was “too little, too late.” The problem was getting worse every year.

Kipper, who is with Supreme Turf, talked to Paul Hoffman, the nutrition specialist for Growth Products’ Central region, to create a plan to bring the greens back to health. Hoffmann suggested using Compost De-Thatcher 15-0-0 with Microbes, Enzymes and 10% Slow Release Nitrogen and instituting a better regimen of top dressing, aerifying, needle tining, and similar cultural practices to help with oxygen and gas transfer below the surface.

Eager to get the greens back to their former glory, the superintendent agreed to give the new program a try. Starting in early mid-May, the greens got their first application of Compost De-Thatcher and were aerified with 3/8” hollow tines instead of the larger solid tines that had been in used in the past. The process was painless: Compost De-Thatcher is an easy-to-spray, non-clogging liquid that is loaded with enzymes and beneficial bacteria that breakdown problematic thatch components, and it has the ideal Nitrogen : Carbon ratio for efficient thatch decomposition. Also, the smaller hollow aerating tines disrupted the greens less than the previously used large solid tines.

Three weeks later, Kipper returned for a visit and was pleased to see visible results at the bottom of the plugs where the thatch was already starting to decay. Two more applications of Compost De-Thatcher were made, one in late May and the another in late June. By mid-October – just five months after the first Compost De-Thatcher application and after the new cultural practices were introduced – the results were phenomenal. The thatch layer had been reduced from over 3” to just a little over an inch in just one season. The humus layer had increased accordingly, and grass roots extended 2 ½” to 3” deep.

“Everyone is thrilled and the greens look great” Kipper reports. In prior years, the grounds keeping crew had spent 2 full, back-breaking days removing the highly thatched areas of the greens and going back in with 5-gallon buckets of sand to groom each green, so that the new plugs would knit together. This year, it took only 3 to 4 hours, which was quite a relief to the crew.

Making the Program Work for You

Kipper also recommends cutting back on any quick-release nitrogen but keeping up P & K levels; slicing greens as appropriate to help get even more oxygen into the soil; and topdressing with sand to get aeration holes filled and to keep the playing surface smooth. When the thatch level is ¼” to less than ½”, your greens are golden, Kipper says, with reduced disease incidence, good playability, and lower maintenance. It doesn’t get much better than that, does it?