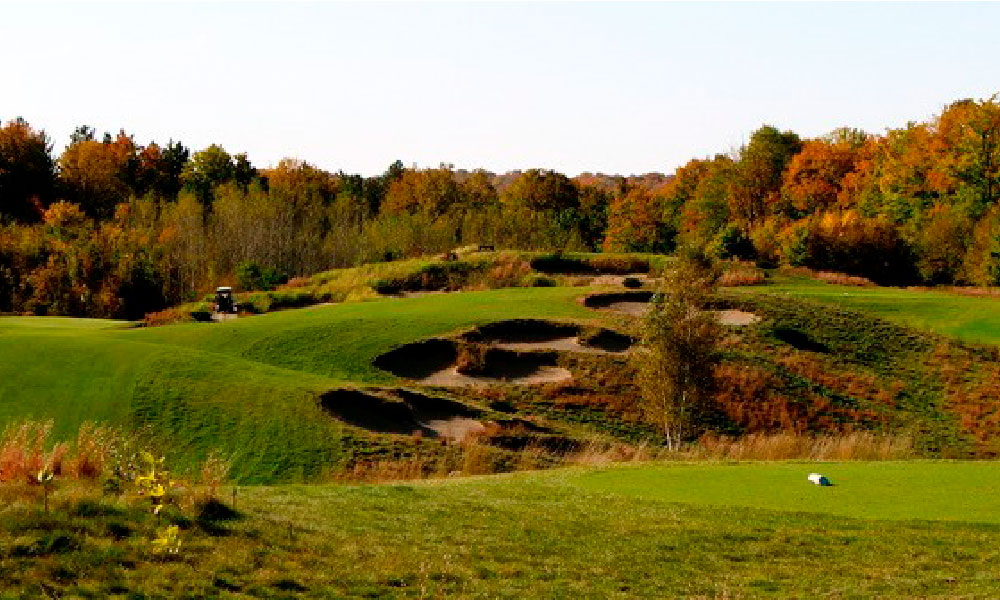 It feels like there’s a wealth of great golf options around almost every corner in northern Michigan. Many of the courses are in the region’s resorts. But there are jewels tucked a bit off the beaten path, down isolated dirt roads or at remote crossroads in small towns.

I played two of these out-of-the-way courses – The Kingsley Club near Traverse City and Belvedere Golf Club just south of Charlevoix – on the same day in late summer. When it comes to golf in Michigan, there’s no better time to play it than in September, when course conditions are prime, the days are still long and the weather offers cool mornings and temperate afternoons under sunny skies.

Despite being built 80 years apart in completely different, yet equally attractive, settings, both Kingsley and Belvedere are core layouts untrammeled by housing. 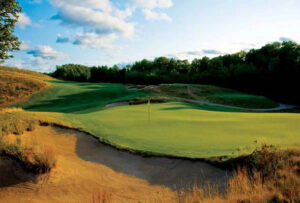 If comparing around at The Kingsley Club to 1970s’ and ‘80s pop music, the course plays like the great Steely Dan, whose music is smooth and subtle, with accents sharp but never forced.

Designed by Mike DeVries and opened for play in 2001, the course is routed on rolling forested hills a 15-minute drive from Traverse City. Quaint and unpretentious, the club is reached via a long dirt road and its entrance is marked only by a small wooden sign.

Many of the hardwoods on the 400-acre property were removed in the 1980s and the site was left with little mature vegetation; its uplands terrain is exposed to the elements and ideal for golf; DeVries moved just 30,000 cubic yards of dirt to build the layout. Its openness and often-brisk winds influence nearly every shot, and firm-and-fast conditions encourage the ground game. 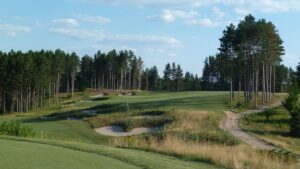 The Par-3 16th at the Kingsley Club

The par-71 layout (there are three par-3s on the front nine) stretches 6,956 yards from the tips. But its eight elevated greens, sloping fairways and constant wind make Kingsley Club tougher than it 73.2 rating and 141 Slope.

DeVries’ goal was to create a monument to the design principles of seminal architect Alister MacKenzie. This is a course of dramatic elevation changes and contours. A wetland in the center of the property was left undisturbed and away from play. Instead, the routing involves holes that wind up, down, over, and around landforms and weave between blowout bunkers woven into native areas. 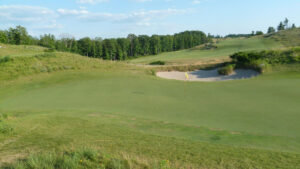 A portion of the site that comprises the home half has deforested areas, but some of the holes are lined by maple, oak, beech, and pine. The best test at Kingsley Club might be its first hole, a 602-yard par-5 that plays off an elevated tee and over deep center-line bunkers. Take the safe route to the left or right and play it as a three-shotter, unless you can drive the ball about 270 yards and get a giant speed-slope kick that will provide a chance to reach the green in two.

The 569-yard par-5 seventh winds over a large ridge to a plateau green. The intimidating par-3 ninth, with its two-tiered peninsula green perched above a deep bowl and surrounded by several cavernous bunkers, ends just below the clubhouse.

The back half isn’t quite as wild as the front, but it’s likely more difficult. Many players consider the 455-yard par-4 12th the course’s signature hole. From an elevated tee, the hole flows through a valley past trees left and wind-blown prairie grass right. Distance and accuracy are needed to reach the small 12th green on the valley floor. Also notable is the massive 465-yard par-4 15th, which concludes at a very penal putting surface.

Golfers get a chance to drive the green at the 292-yard, bunker-strewn 13th before facing a difficult par-3 at the 225-yard 16th.

Golfweek magazine named The Kingsley Club as the 24th Best Modern Course in America in 2013, making it the highest-rated course in Michigan. It’s an amazing experience and should be on any golfer’s bucket list.

History in the Dirt at Belvedere

The city of Charlevoix rests on a narrow saddle of land separating Lake Michigan and Lake Charlevoix near the upper-right-hand corner of the bigger lake. Belvedere Golf Club, built-in 1925 on two large and somewhat swampy parcels, is two miles south of town.

Belvedere began in 1878 as a Baptist summer camp before being developed into a 100-acre, summer-resort destination. About 40 years later, golf debuted with a course designed by William Watson, one of the Golden Era’s notable architects. The fescue course was constructed over a two-year period by five teams of horse-drawn scrapers and a crew of 150 men.

There are no tricked-up holes here: Bunkers lurk at green-sides and strategic fairway locations, especially at doglegs, but are not overstated. Playing to a par of 72 at 6,943 yards, Belvedere is rated at 73.7 and has a 134 Slope. 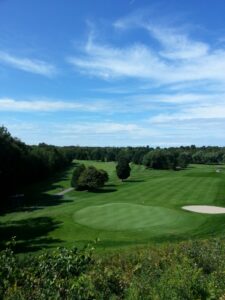 The 370-yard opener begins at the highest point on the property with a drive off an elevated tee to a wide landing area. The fourth is one of the best par-3s in northern Michigan. Measuring a stout 236 yards, it requires a precise long-iron or fairway metal to reach a perched, small green.

The 541-yard fifth, the first of Belvedere’s par-5s, bends leftward on the second shot. A water hazard crosses the fairway 180 yards from the green, which is flanked by sand traps. The ninth is just 486 yards from the tips, but it ascends up a hill past out-of-bounds left and well-placed bunkers right. With a backing wind, the bunkers can be carried, making the green reachable in two.

The 439-yard 12th is wide open off the tee, but the fairway slopes downhill near the 150-yard marker, leaving an awkward, downhill lie for those who’ve bombed their drives. The 15th, at just 465 yards, is another short par-5. But the fairway is squeezed by a bunker on the right and the green is guarded by bunkers and OB left. The last three holes at Belvedere play uphill and often into the wind.

The 346-yard 16th ascends to one of the course’s smallest putting surfaces. Players should favor the left side of the green, as shots missed right will fall down a hill leaving a difficult pitch. Belvedere’s 456-yard closer plays into the prevailing wind; the tee ball must miss two bunkers along the right and a huge maple tree left that blocks approach. The slick 18th green contains large mounds and slopes.

Legendary golfers such as Bobby Jones, Gene Sarazen, Walter Hagen, Tommy Armour, Sam Snead, Ken Venturi, and Tom Watson have been part of the Belvedere’s history. Watson, who grew up playing Belvedere nearly every summer in his youth and still makes sojourns to the course, retains a space in the men’s locker room.

Belvedere revels in its history, having been the site of the Michigan Amateur Championship a record 40 times. It hosted the prestigious tournament, played for the 103rd time, in June 2014.

Bringing People Back
The Ultimate Golf Experience
To Top