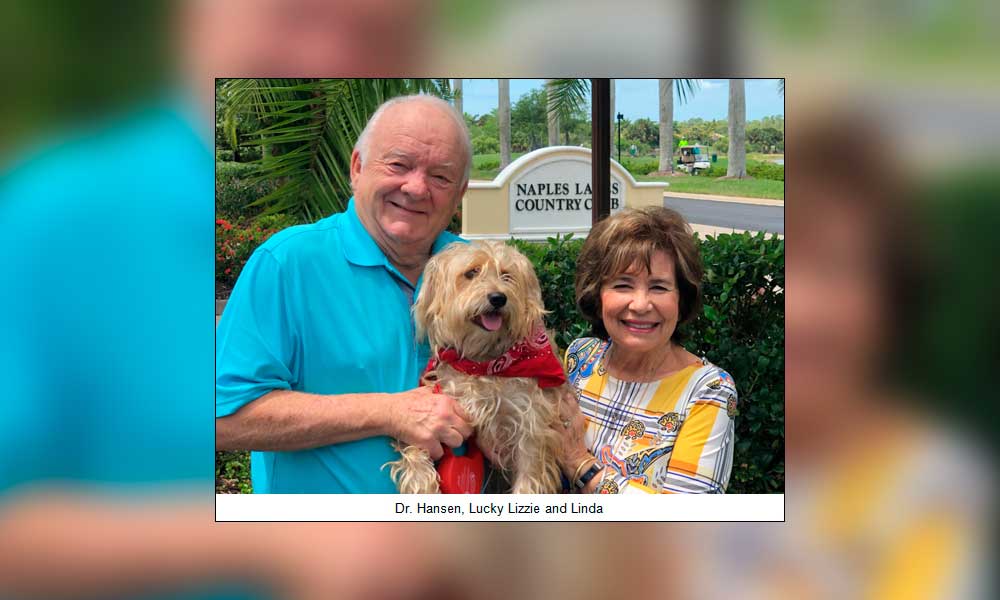 For the past six seasons, Brandon McMillian has transformed out-of-control shelter dogs into perfect pets and finds them homes on the Emmy-award winning Lucky Dog TV series, shown during weekends on CBS. At Brandon’s California training facility – known as the Lucky Dog Ranch – he goes to work on the seemingly impossible task of turning frightened pooches into perfect pets. “From hopeless to a home” is Brandon’s mission, which he brings to life in each episode as a lucky family adopts an even luckier dog.

Happily, one of these special furry friends has found its way from Los Angeles to a home in Naples Lakes Country Club in Southwest Florida. An entire segment of the meet-and-greet (of dog and new owner) will be featured on an upcoming Lucky Dog show airing at 12:30 PM-ET on Saturday, April 27 on CBS. (Check listings for exact time/station.) Here is how this amazing story came to be.

Dr. Jim Hansen, a resident of Naples Lakes for 19 years, was distraught after the passing of his 17-year old Golden/Border Collie, Sammy. Linda, his wife of 52 years, wrote to the Lucky Dog TV show explaining his sadness after his loss, requesting that they find him a new dog to love. After three years with no response, they had almost forgotten about their letter. Then, the Lucky Dog staff sent a note saying they were searching for a warm, friendly dog and invited them to Los Angeles after a decision had been made.

Dr. Jim Hansen, a resident of Naples Lakes for 19 years, was distraught after the passing of his 17-year old Golden/Border Collie, Sammy. Linda, his wife of 52 years, wrote to the Lucky Dog TV show explaining his sadness after his loss, requesting that they find him a new dog to love. After three years with no response, they had almost forgotten about their letter. Then, the Lucky Dog staff sent a note saying they were searching for a warm, friendly dog and invited them to Los Angeles after a decision had been made.

Explains Jim, “They started sending photos and dog descriptions of their rescue dogs; most were not the type of dog we wanted, so we initially declined. An entire season went by and we thought we had missed out. Then they called back with a photo of a dog that we knew was perfect. Yes, it was love at first sight with a small female Border Terrier that looks like Benji from the movie. But by the time we had connected, they had taken it back to the pound. When we called and frantically said NO, that’s the ONE WE WANT, they drove 20 miles back to the pound the day before she was to be put down and rescued the dog for the second time.”

The next step was to put Lizzie in training for about two months, getting her ready to move in with her new owners. She was spaded, given her shots and a chip embedded should she become lost. After the Hansens traveled to Los Angeles – at their expense – Brandon worked with them for two days, training them to take care of Lizzie with various commands. Because Linda and Jim wear hearing aids, they also trained Lizzie to respond to the sounds of doorbells and ringing cell phones, making her a certified service dog and able to travel with them on the plane. In September, they brought the dog, estimated to be between one and two years old, to their new Florida home. For five hours, Lizzie sat right under the seat on the plane and never made a sound.

Added Jim, “Right after we returned home, there were massive fires near Malibu, where Lucky Dog is filmed. They had trouble getting people out so it’s entirely possible our Lizzy might not have survived. Her given name is Elizabeth but after almost NOT making it twice – and maybe three times – we named her Lucky Lizzie.”

But wait, there’s MORE to this warm and fuzzy story. Once a year, the Lucky Dog TV team selects one family to visit the home where their dog has been placed. In March, they brought an entire camera crew to Naples Lakes and filmed the pooch showing how she swimmingly fit into her new life. Adds Linda, “Knowing that we are boaters, when we were in LA, they took us out in a boat with Lizzie to be sure she was OK in the water. When the TV show crew came for a visit, they brought us a box full of toys, dog food, collars, medicine, and even a doggie life jacket for our now 24-pound grown pooch.”

The dog has clearly changed Jim and Linda’s life for the better. Both Jim and Linda are still very happy working. With a Ph.D. in computer sciences, Jim has spent over 40 years as an early professor at Southern Illinois University in the then-new computer field. He is now involved in cyber security, helping Naples Lakes and other clients. Linda is a professor in education at Florida Gulf Coast University. Work is even more fun now with Lizzie waiting at the door when they come home.

Lizzie has made friends with everyone in her Naples Lakes Country Club neighborhood, with its Arnold Palmer Signature Golf Course. Jim and Linda often “walk” her via an expandable leash attached to their golf cart for morning runs of about a mile and a half. “Even though we lived in this wonderful community for 19 years,” said Jim, “we are always meeting new neighbors. Lizzie has served as a catalyst for making new friends. We know that millions of people could have selected this dog, but she landed with us in Naples. How lucky can we be?”

Located at 4784 Naples Lakes Blvd., Naples Lakes Country Club (NaplesLakesFL.com) is a private 490-acre gated golf course and country club community where membership is included with every residence. At the heartbeat of the community is the newly renovated Arnold Palmer Signature Golf Course, the last course renovation reviewed by Arnold Palmer before his passing. Naples Lakes contains more than 200 acres of lakes and protected nature preserves and has been designated as a Certified Audubon Cooperative Sanctuary, one of only 114 in Florida. Naples Lakes was also selected as the Best County Club in 2018 by Gulfshore Business Magazine. The golf course was recently ranked at #11 of the top golf courses in Florida by Golf Advisor in its Best of 2018: Florida annual list, which names Florida’s top 30 golf courses.

XUDE Hospitality Enters Golf & Resort Management Arena
In Winning The War Against The Spotted Lanternfly (Slf), Mauget’s Dinocide® Is Chosen As Most Effective Solution For Control Of Slf!
To Top