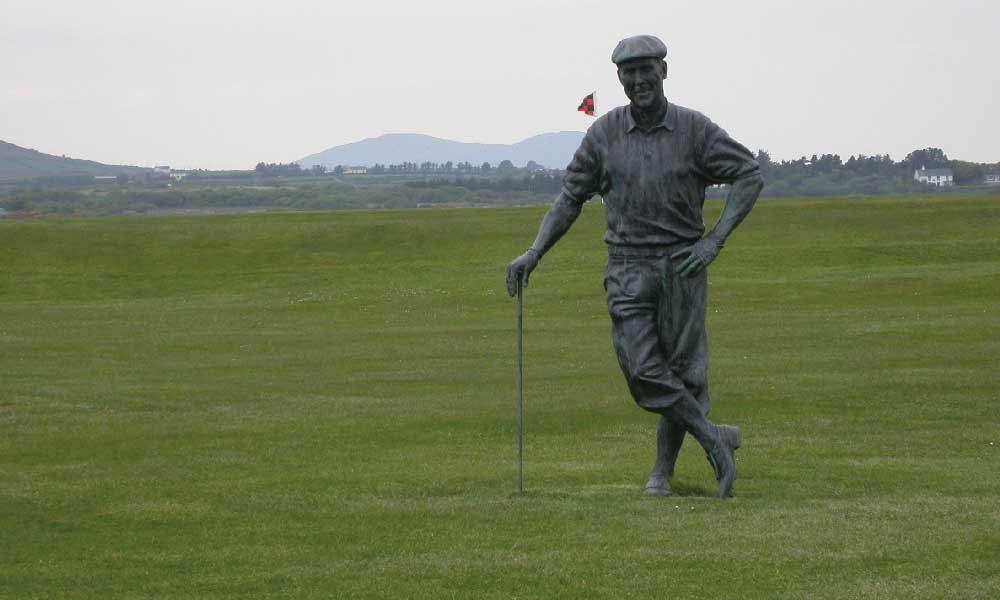 This column features recollections of the author’s 33 years as a golf writer. These installments stem from his many travels and experiences, which led to a gradual understanding that the game has many intriguing components, especially its people.

As promised in the last installment, here are some memories from areas outside my native Washington State. I hope they offer a diversion during these pandemic times.

• I’ve taken quite a few familiarization trips over the years. One mentioned previously (Part 5 of this column) was to the great state of Louisiana. In addition to visiting New Orleans mere weeks before Hurricane Katrina devastated this part of America, another potent moment came when we drove through Fort Polk, the U.S. Army post I was assigned for basic training in February 1971, during the Vietnam War.

Our guide on that July 2005 trip was Dan Shepherd, then working for Buffalo Communications. (The Virginia native now runs Dan Shepherd Public Relations – https://danshepherdpr.com/.) His late father was stationed at Fort Polk the same time as me. Some surprising emotions surfaced as Dan and I discussed our commonalities with the place.

Dan recalled our 15-year-old conversation vividly in late December 2020. “Being back in Louisiana and visiting the base where my father was stationed brought back a lot of memories,” he said. “The fact that you shared similar strong memories and feelings gave the trip an almost surreal feeling. That we got to play some good courses and enjoy them with an outstanding group of people made it a rich experience with a lot of camaraderie, thanks to the game we all love.”

My recollections of Fort Polk are not as sanguine as Shep’s. Here’s why. In the early ‘70s, basic training extended eight weeks, after which a “grunt” such as me went to Advanced Infantry Training. Unfortunately, my time frame was longer. Two weeks in, while wearing Army boots that were way too big, I developed several large blisters on both feet. It was a relief to finally jump into a shower following hours-long forced-marches in stifling heat and humidity while lugging a 50-pound pack. But those disgusting stalls led to a blood infection in my right foot. Delirious and unable to get out of my bunk for 24 hours, despite verbal assaults by a drill sergeant, I was finally taken to the base hospital, where the medical staff determined I had a 107-degree temperature and was near death. My right foot was a baby-blue color. Not good. I was hospitalized for 17 days in a ward with seriously injured Vietnam vets. Once healed, I “recycled” to a new basic training company. It took me 13 weeks to get out of that hellhole the troops called “Fort Puke.”

• Another golf stop in the Pelican State was Carter Plantation in Springfield. At the time it was a relatively new layout designed by native son and PGA Tour player, David Toms. The golf course site enjoys a rich and important history. The “plantation” was established in 1817 when the property was bought by Thomas Freeman, the first African American to own property in Livingston Parish, and the first Black man to record a legal transaction in the Greensburg District. He sold the property and Federal-style house (dubbed “Sycamore”) he built to the parish sheriff in 1838. Freeman’s Carter Plantation House is now on the National Register of Historic Places.

• I also went on a fam trip to Mississippi, with Dan again the bandleader. We had a great time playing golf in the Magnolia State, visiting blues clubs and sampling Delta foods. That is until I fell ill, was taken to a hospital in Jackson with a 103-degree temp (is there a thread here?) and diagnosed with bronchitis. Forced to stay in a hotel room the final two nights of the week-long trip, I missed out playing in the pro-am portion of the PGA Tour’s Southern Farm Bureau Classic (now called Sanderson Farms Championship) at the Country Club of Jackson, thus forfeiting the chance to come home with a brand-new set of PING golf clubs.

• Another cross-country trip was to Myrtle Beach in South Carolina; this time my wife came, too. We had fun despite dicey weather and accommodations. A highlight was meeting Claude Pardue, owner of Mystical Golf and its three courses with the otherworldly names of Witch, Man-O-War and Wizard. During lunch I chatted with Claude, a kindly gentleman who supports many local charities. Whenever learning more about a golf course from its staff members, I have several stock questions to help differentiate it from any other layout. Among them is, “What’s the elevation change of this course?” I about choked up my chili dog when Claude drawled, “It’s about a foot.”

• One of many Canadian gems is Big Sky G&CC in Pemberton, a half-hour north of Whistler Resort in British Columbia. The course meanders across a mountain-ringed meadow crossed by creeks. A highlight for visitors is suddenly hearing a whooshing sound, looking up, and finding a massive glider plane sweeping closely overhead.

• Farther afield are buddy trips to Ireland (three in all) and Scotland (just once so far). At Waterville Golf Links in County Kerry, I had the pleasure of chatting with Liam Higgins, a former European touring pro and, like most Irishmen, an entertaining raconteur. Liam once set the record for the world’s longest drive of 634 yards on a runway at Baldonnel Military Airport in Dublin. Waterville also has a life-size statue of the late, great American golfer, Payne Stewart, who played here in preparation for The Open Championship and endeared himself to the locals.

• I toured Tralee Golf Club with club secretary, Eugene O’Callaghan. At one juncture, Eugene stopped the buggy (golf cart) to point out a golfer in the distance. He noted the man had just one arm but carried a respectable 10 handicap. Sure enough, we watched as his tee shot on a 176-yard par-3 carried a crevasse and stopped 20 feet from the pin.

• I played the Old Course at St. Andrews with Seattle mates at a time that coincided with the spring meeting of the R&A. Arnold Palmer, who singlehandedly made the Open Championship a major event for American touring pros, was the featured guest. The famous golfer was going to end his visit with a round of golf, but the weather that day was horrendous – 50 mph winds and constant rain. An army of 2,000 people surrounded the first tee watching Arnie tee off. He was accompanied by the club secretary. The poor secretary hit first. I say “poor” because his first two drives went out-of-bounds left – all the way across the wide fairways of the first and adjoining 18th holes into parked cars! Arnie told the gathering he’d play as long as the fans accompanied him. After just a few holes, we observed Mr. Palmer heading off the venerable course to his private jet.

• Eastern Oregon is vast and, except for the Bend/Redmond metro area in the center of the state, sparsely populated. While researching my Northwest guidebook, I once traveled from Lakeview in Lake County (pop. 7,900 in an area of 8,400 square miles) to Hines in Harney County (7,330 people and 10,226 square miles). Along this 137-mile stretch one sunny summer day I passed just one car going in the opposite direction.

Yet there are golf courses in these stark environs. Among the more memorable are Christmas Valley 95 miles south of Bend, Valley GC in Hines, and Shadow Butte on the Idaho border in Ontario which, with 11,100 inhabitants, is the largest city in Malheur County (pop. 30,670 and 9,930 square miles in size). The 18 holes at Shadow Butte closed several years ago, but the nines at Christmas Valley and Valley GC survive.

The Christmas Valley and Valley layouts are situated over 4,000 feet above sea level. Both are noted for flat, unremarkable terrain and caked, alkaline playing surfaces. Their unfavorable chemical composition renders the turf white in color. Despite such drawbacks, these woebegone venues serve the locals’ recreational urges.

My friend Allen once stopped by Valley GC, and on a whim, decided to play around. He needed to rent clubs. Upon reaching the first tee, Allen found that his driver bore more descriptions of its amazing capabilities than any club he’d ever seen, let alone swung. Its soleplate read: “Shotgun Willie, Jumbo Weapon, The Doctor of Distance.”

When Allen later told me this story, I asked, “Where’s the club now?” He thought it was still likely in a rental bag in Hines, Oregon. Fast-forward two years later. While Allen, my wife, and I headed to the even more isolated Silvies Valley Ranch (see my article, “No Goats No Glory”), we stopped by Valley GC to see if the club was still on the premises. Sure enough, it was. Allen asked the course manager if he could buy it. The elderly lady said she needed to check with the “pro.” But Allen’s doggedness paid off, as in early 2019 he purchased this menacing weapon for the princely sum of three dollars. We tried it out the next year during our round at six-hole Kinzua Hills in Fossil, Ore. (see “Making the Rounds” Part 9.)

Much to our surprise, “Shotgun Willie” worked pretty darn well.

Jeff Shelley has written and published nine books as well as numerous articles for print and online media during his lengthy career. The Seattle resident co-founded the Northwest Golf Media Association in 1995. He co-authored (with Michael Riste) “Championships & Friendships: The First 100 Years of the Pacific Northwest Golf Association.” Other titles include three editions of the book, “Golf Courses of the Pacific Northwest.”