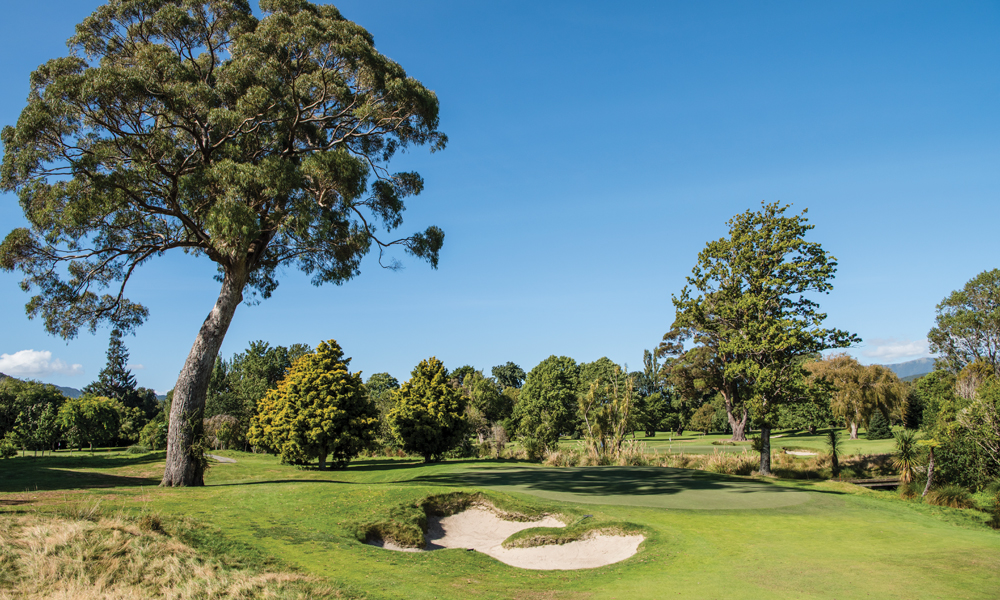 No, the above aren’t exotic menu items at an overly ambitious, pretentious restaurant. They’re, respectively, a sampling of the amazingly varied creatures found on golf courses in the United States and New Zealand.

Remarkably, considering the disparate, distant nature of the two countries and their unique wildlife, the challenges, tasks and turf types overseen by Kiwi golf course superintendents and their American counterparts are quite similar. 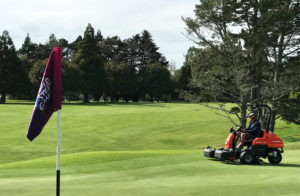 One might think that fescue – and even Paspalum turf, given the saltwater surrounding the island nation of New Zealand – would be common. Not so, said the four superintendents interviewed. “We use cool-season grasses, T1 creeping bent on tees and greens, and a mix of Colonial bent and poa annua in the fairways and roughs, “ said John Spraggs, superintendent at the historic, 27-hole Royal Wellington Golf Club.

“Poa, although the last four to five years we have been overseeding at Pakuranga Golf Club with creeping bent,” noted 51-year-old Peter Boyd, the superintendent for 13 years at the Auckland public course. “The T1 mixes well with the poa and has been really successful in some of the weaker, diseased areas. A full conversion to bentgrass is not completely feasible here at Pakuranga, but I’m aiming to get to a 70-30 mix in the bentgrass favor, if I can.” 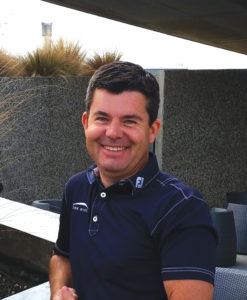 Brendan Allen, general manager/superintendent at The Hills Golf Club in Queenstown on New Zealand’s more remote and less-populated South Island, comments: “Colonial bentgrasses are by far the most common species across the country and are dominant on the South Island. We have Colonial bent on about 95 percent of the golf course. The varieties are all NZ-bred and include Egmont, Arrowtown, Troy, Sefton and Manor. We also have some fescue in our long roughs, but not a lot.

“Warm-season grasses don’t do well in our part of the country due to permafrost in winter, long transitions in spring, early autumn frosts, and the potential for cold nights in summer.”

Sinclair Hogan, the Scotland-born superintendent at Wairakei Golf + Sanctuary in the central part of the North Island, said his highly-rated course is “predominantly poa annua. Fairways and tees are a blend of fescues, browntop and poa.” Hogan notes that he experimented with Paspalum at a previous career stop. “Had a play with seeded seashore Paspalum while working in the warmer climate in the far north of New Zealand. It certainly had merit during the peak of summer.”

Like superintendents everywhere, Kiwi turf managers face a plethora of pests. Spraggs’ list includes: “Crane fly, cut worms, web worms and earthworms. We spray Acelepryn for grubs and weevils, and the earthworms are controlled with tea-seed extracts.” Other concerns for Spraggs include fungi, microdochium and sclerotinia.

Boyd’s public course is among the busiest in New Zealand’s largest city. He copes with “black beetles, pirona (a grass grub), Argentine stem weevils and cut worms. He uses “Pyrethrum-based products in a tank mixed with a foliar application, as well as Acelepryn twice a year.”

The Hills Golf Club in Queenstown on New Zealand

Allen, who’s been at The Hills for 15 years and confessed that his dual GM-superintendent roles makes his time “very stretched,” deals with “grass grub, sod webworm, porina caterpillars, and Argentine stem weevil [also known as bluegrass weevil]. All insect pests are controlled by Acelepryn, with a single application in late spring [September to November in the Southern Hemisphere] for everything except stem weevil, which gets two doses.

“Rabbits are another major issue. They’re controlled by a ‘rabbiter,’ who shoots, snares, ferrets, and gases them. About 1,200 a year are dispatched.”

Hogan’s Wairakei course is within a dense, lush forest near massive Lake Taupo. “Disease is our main issue. Anthracnose, fuserium, dollar spot, basidiomycetes and waitea patch can flare at any time, and sometimes all at once! Our wildlife generally takes care of insect issues; spraying insecticides is a last-case scenario.”

As may be expected, NZ crew sizes vary from course to course. The 56-year-old Spraggs – who’s been a head super for 35 years – has 16 full-time employees and two summer interns. Boyd gets by with much less help at Pakuranga, a well-maintained layout that was one of the three venues used for the golf competition during Auckland’s 2017 World Masters Games. “We have five here, including myself. We have a contract mechanic come once a week for servicing. Also, five to 10 volunteers come twice a week or whenever we make course renovations.”

As if his plate isn’t full enough, the 43-year-old Allen is overseeing the construction of nine new holes at The Hills, so his staff is in a state of flux. “Winter season drops to 12 crew members, with a compulsory annual leave window. Peak summer staff in January is about 22. We’re building a new nine-hole course this summer in-house, so when that’s completed we’ll have 27 on hand.”

Adds Hogan, a 30-year veteran of the golf industry: “We have a core staff of 12. This includes a mechanic, gardeners and a full-time gamekeeper on the property. We employ seasonal staff to aid in course conditioning during the peak season.”

Annual budgets are also dissimilar, with Royal Wellington at $1.4 million (all amounts in NZ dollars); Pakuranga $650,000, with another $100,000 for capital replacement; $1.5 million at The Hills; and Wairakei at about $1 million. Another superintendent, Greg Swafford – who works at the only Alister MacKenzie-designed course in New Zealand, Titirangi Golf Club near Auckland, puts his maintenance budget at “$350,000, excluding capital purchases, course development and wages.”

Green speeds are generally the same, ranging from 9 on the Stimpmeter at Royal Wellington; 9-9.5 and up to 10.5 for tournaments at Pakuranga; 11 in summer and autumn at The Hills; and 9.5-10.5 at Wairakei. Spraggs said new greens were built at Royal Wellington in 2013. Both he and Allen noted that anything faster at their respective courses would make the greens “unplayable” because of severe slopes.

Boyd said he was very proud of how Pakuranga played during the World Masters Games, which drew a total of 28,000 athletes from around the world in April 2017. Certainly, this writer was among the contestants baffled by its slick, rolling greens. “My staff and I saw (the Games) as a great opportunity to present the course in the best tournament condition. Given timing and weather, I thought we did a real good job and produced some really good surfaces, particularly the greens, which we had only cored four weeks earlier.

“The feedback was generally great, especially from overseas visitors and the number who returned after the Games, so that was really cool, The WMG was a pretty big thing when you reflect on it. If I was completely honest, all three of us superintendents from the courses used [the others were the parkland-style Akarana and the links at Muriwai] wanted ours to be at its best… nothing like some healthy competition amongst your peers! I’m really proud of how our crew showcased Pakuranga.”
Kiwi golf course superintendents seem to enjoy a bit more latitude with chemical usage than Americans. “We’re pretty lucky here in Auckland and, well, most of the country, really,” said Boyd. “There are not a lot of products officially registered for turf, and we re allowed to use a vast array that are available to the horticulture/farming industry.” Added Spraggs: “We don’t have too many registered products available in NZ, so we use products off-label and/or search for U.S. labels with similar active ingredients.”

Allen said he and his staff strive for organic practices. “We avoid using any agrichemicals unless absolutely necessary, and believe getting the soil and agronomic fundamentals correct – i.e., minimal nutrition and irrigation, frequent aeration, custom compost teas – minimizes the need for them.”

Three of the four superintendents interviewed said they faced few local restrictions on tree removal. But for Spraggs, at Royal Wellington, it is a concern. “The course is over 100 years old. Many stately trees were planted and they are well loved. Tree removals are a challenge because they take forever to get to a size that starts to impact play or turf, so just when they look majestic, someone says they have to go.”

As I mentioned in Part 1 of this two-part series, Hogan’s course is one of the most naturally gifted places I’ve ever played golf, thanks to a concerted effort to protect endangered native species via a custom-built 4-foot-high fence around the entire 450-acre site. ”We are fortunate to have a very hands-on owner [billionaire Gary Lane]. His investment in the golf course and sanctuary has seen Wairakei become very unique. We have a close relationship with the Department of Conservation, which uses Wairakei as a crèche for the endangered New Zealand kiwi and a ‘retirement village’ for the critically endangered takahe birds.

“Our full-time gamekeeper is very busy in spring, hand-raising fallow deer, tracking the flightless kiwi and takahe, and taking care of wildlife. We also have an abundance of guinea fowl, ducks, pheasants, quail, falcons and a number of other species to view if your golf game is a little off! Around 35,000 native trees have been planted on the property since the construction of the perimeter predator fence.”

A four-year university degree in Turfgrass Management and/or Horticulture isn’t quite the requirement for New Zealand head superintendents as it is at some U.S. golf courses. But each of the interviewees for this story – all of whom were kindly referred by NZGCSA President Steve Hodson – boasts a considerable amount of academic background and on-the-job experience.

Spraggs’ offspring are following in his footsteps. “I have three sons in the industry. My eldest son is a superintendent in Australia, second son is on my staff, and the youngest is a superintendent at another course in Wellington. We all love the game. And what better way to give back to the game we love than at the grass roots?”

Though their native animals are otherworldly, New Zealand’s golf course superintendents share a close affinity with their American mates on the opposite side of the globe.