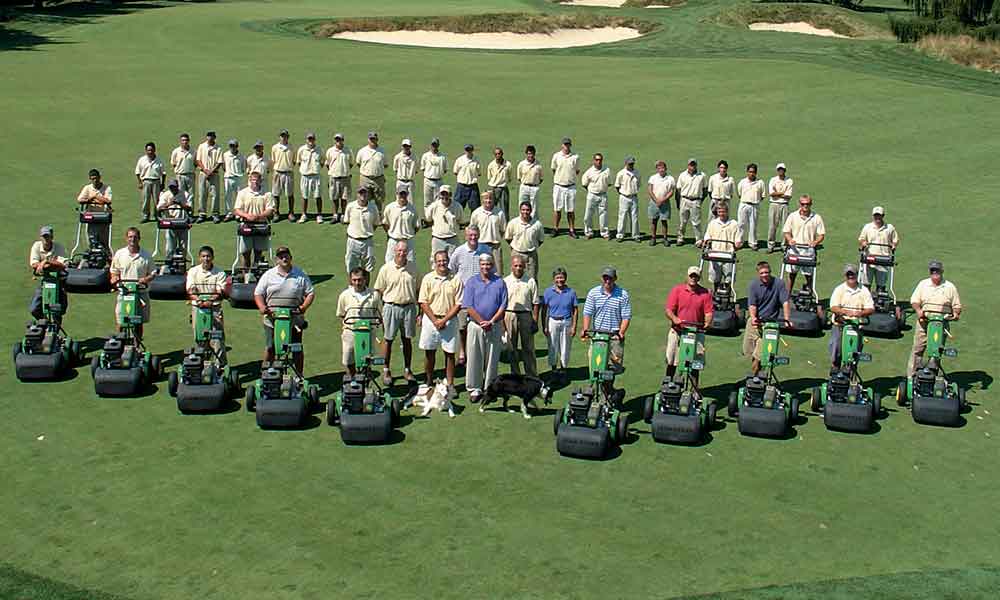 As I enter my 39th year in the golf course industry, I can hardly believe it. I vividly remember picking iron ore rocks off Iron Masters Country Club in Roaring Spring PA, in the…

As I enter my 39th year in the golf course industry, I can hardly believe it. I vividly remember picking iron ore rocks off Iron Masters Country Club in Roaring Spring, PA in the 60s. There is little doubt that I am now on the backside of my career, and it makes me wonder if as much change will happen in the next three decades as I have seen in the last three.

You’re probably saying “you won’t know you’ll be like at 90 – more than likely making carbon!” Au contraire! You see, my mom and dad are both alive and very well. My father will turn 91 in March and my mom will also be 91 in July. Granted, I’ll be a spectator, but I will be watching!

As I reflect and then look forward, I think some practices will revert to former modes. If you look at our resources like oil and water, we’re going to have to make some changes, and pretty darn quick!

The demographics of our population are changing and it is not even close to where it’s going to end up.

We, as Golf Course Superintendents, are going to have to change, or continued growth in golf will become a fleeting memory; just like picking stones in the 60s.

I sometimes worry that we are becoming preservationists instead of aggressive managers of the land. Let me clarify‚somewhere along the line it has become a perception of failure if there are bare spots on greens or brown spots on the fairways. God forbid finding a weed out there!

Merion’s greens were treacherous and the USGA held the speeds down. In fact, it is the only championship that I ever remember not cutting or rolling in the PM on any day.

Just so you know, not a single hole played to par, not even the dainty little 126-yard par-three that parallels the front entrance. While all that was intriguing and it was a championship, I decided to do some experimenting in ‘06 and ‘07.

By now you are probably thinking he is either a maverick or NUTS – that is a nickname given to me affectionately by one of Merion’s former Superintendents, Curtis James.

Since I am telling all in this article, I might as well let you all know that I do not topdress greens except in the winter. If you’re still reading this I can hear you saying, this guy is nuts, but wait!

If you topdress to keep greens smooth and to reduce thatch, you can accomplish the same goals by rolling; it does not ruin your mowers and is not abrasive to your greens.

We left them to wilt before we would water them, and you know what is really amazing? They did not die, not a single one. I am taking that mentality to the fairways.

We have started a topdressing program on fairways and to date we’ve put down 300 tons to the acre. My friends have asked me, are you doing this for earthworm control? I said “No, I am doing these practices so they can become firmer, faster, dryer, and consequently play better.”

Did I mention that I’ve quit coring the fairways? We aerate but we solid tine the sand in. We topdress with between 7 and 12 tons to the acre and then solid tine overtop and drag it in. This way they get really firm, this way I don’t bring any poa seed to the surface, and when you take a plug out of the fairways they are very sandy but they do not have layers.

Did I mention that our Equipment Manager, Jay Rehr, built a fairway roller for us? And yes, we cut fairways seven days a week with a five-plex because we are looking for weight and soon we will be rolling every day as well.

We had a contest at Merion to see how many days we can go between fungicide sprays. We have gone 45 days during the season and in the winter heck, we just do not spray. Did I mention that I have not night watered a green since 1975? Hand watering is the cornerstone of my agronomic programs. I would give up chemicals before I would give up hand watering!

The next statement amazes many people, including me; I have not had a severe outbreak of dollar spot on any of the 7 golf courses that I have ever taken care of over the last 34 years. In fact, I can not remember the last time that I had an outbreak of dollar spot on a green. I have gone through summers when the only time we have insect damage on greens is after an aerification.

I tell my Supers and Assistants if an insect comes on our greens he better be packing a compressor and an air hammer. We do not have ball marks, we have burn marks.

What do the members say about all of this? Their handicaps went up a little in the beginning, but they are accustomed to playing in firm fast conditions.

I think it gives them an edge when they play competitive matches.

The women like firm playing conditions because many of them hit the ball lower and they get more roll.

The future may dictate that all of the above will change, but I like to think of myself as a solution instead of a result. Therefore in the last several years, my mission statement has been to make sure that playability is first and turf health is second. What does that mean exactly? It means that firm fast playing conditions are paramount, and if the grass can’t take it, TOUGH!

Many of you know that I am best known for keeping things dry – I mean REALLY DRY! In 2005, during the US Amateur, I was determined to make Merion as hard as possible for the world’s best amateurs. One of the ways I did this was by making our greens as close to as brick-hard as possible.

We did that through double cutting, rolling every single day for weeks and months. We Dryjected sand into the greens but never removed a plug for three aerations.

I still have many areas to perfect, and unfortunately only have about 10 years to do so. Our budget is high and I would like to get it down because huge budgets are not going to be a reality in the future.

Believe it or not, this is just the tip of the iceberg. So, what is the point in all this? I predict that the day will come in the next three decades that you will be allocated the exact number of pounds that you will be allowed in regards to N and K per acre and P will be gone, just like DDT.

Will I be growing grass then? No, but hopefully I will have contributed to a small degree because as I said before, I like to think of myself as a solution and not a result, so I am teaching those under me that if you only water the bare minimum; feed the plant but do not overindulge it, do not spray because it says so on the label but wait instead until you see the problem.

Then I think these young men will be able to face the uncertainty.

I, on the other hand, will be fishing for bass in Florida and reading about all of you via a screen that is on my Polaroid fishing glasses that I prompt by merely wondering what it’s like to be a Golf Course Superintendent in 2037!

Thanks again for giving me the honor to have an article in your great magazine!

The Long and Winding Road
A Path with Heart
To Top