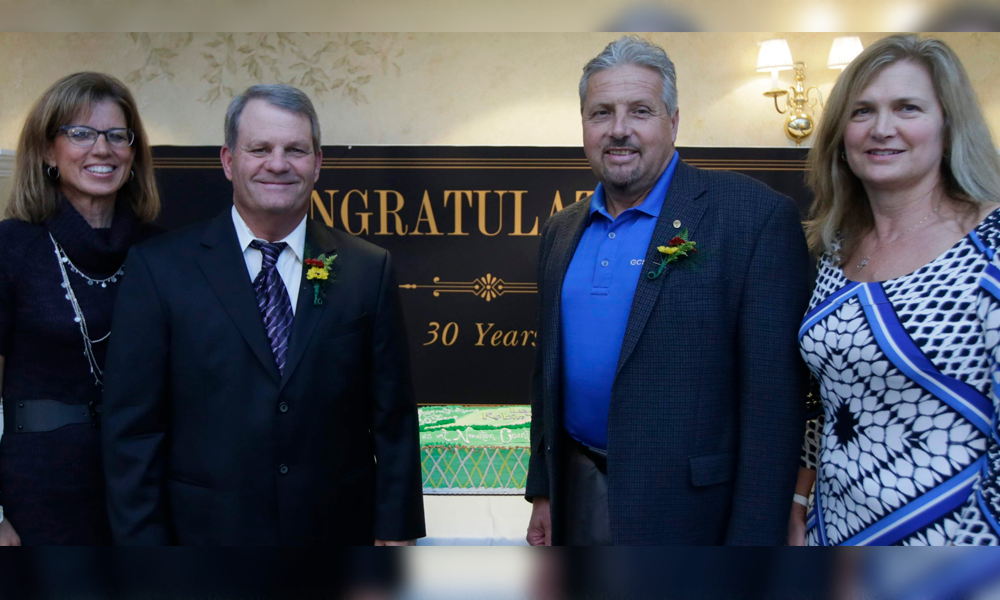 It was party time at Newton Country Club on Friday night.

No big news there.

For exactly 100 years, there have been plenty of party times at the club, including long-ago Vaudeville performances and parties that lasted late and laughed in the face of Prohibition.

This time, on Friday night, there was reason to celebrate. Or, to be more precise, there were three reasons.

The dining room was filled to honor three individuals who have made this club something special for the past 30 years.

Les Carpenter began here as golf course superintendent 30 years ago, and he knows and loves every blade of grass on all 18 holes, and, by all accounts, is one of the most accomplished and respected superintendents in the state.

Robin Kohberger is Newton’s PGA pro who has won dozens of tournaments, and he can walk into any clubhouse in New Jersey and be known and welcomed with admiration, while his wife, MaryBeth Kohberger, is, herself, a trailblazing PGA pro who has brought the sound of children to the course with her acclaimed “Take It to the Tee” lessons that will produce the golfers of the future.

First of all, the food was delicious, as always. (An experienced Culinary Institute of America chef in the kitchen will do that.)

The men in the dining room wore their usual jackets and ties. The women, as usual, stole the show with different styles and fashions in every direction.

It was, as it often is at the club, a definite party atmosphere.

As for the three honorees, we’ll start with Carpenter and we’ll ask club president Dick Wilson to get us started:

“He’s one of the best superintendents in the state,” Wilson said. “Nobody will disagree with that.

“Les is very serious about the job. We’re all very proud of this course and he’s the one behind all of that.”

In fact, Carpenter grew up on a golf course, as his father was the super at Musconetcong Golf & Country Club, now called Minebrook, in Hackettstown.

“Being a superintendent involves your whole lifestyle,” Carpenter said.

“Spring, summer, fall, I’m here early and I’m here late quite a bit. The satisfaction comes from looking out the window of the clubhouse and seeing a course that’s as perfect as you can make it.

“You want everything perfect, whether it’s at the tee or on the green. You do it for the members and you do it out of respect for the game of golf.”

Right out of Rutgers, Carpenter immediately got a job, at age 20, as the youngest superintendent ever hired in New Jersey when he took over at Picatinny Golf Club, staying there for eight years before moving to Newton Country Club.

Active in both state and national associations, Carpenter’s work has been awarded by several environmental groups, including certification of the course as an Audubon Wildlife Sanctuary, and he represents his professional assocations in dealing with local and state governments involving golf industry issues.

Carpenter is a good golfer, too. But, he’s not in Robin Kohberger’s league.

As a four-sport athlete in high school, Kohberger turned down a wrestling scholarship at Penn State to, instead, stay close to home in upstate New York and play golf at Elmira College, where he twice qualified as an individual for the NCAA Tournament.

After college, he was assistant pro, then head pro at clubs in New Jersey and Florida, while also playing on what was then called the PGA Mini Tour. He landed at Newton 30 years ago and immediately made a big impact.

“Every Thursday, there are pro-am events all over the state, at some of the best courses in the state, but nobody was signing up for them,” Wilson recalled. “Pretty soon after Robin arrived, we needed to have a raffle to choose who got to play with him in these one-day tournaments.”

Job offers? Both Carpenter and Kohberger have heard them over the years, but both decided to stay put at Newton.

“Robin is great in the pro shop and great out on the course,” Wilson said. “Our members love playing with him. No matter how many times you play with Robin, you’re going to learn something new each time.”

The club president noted that Kohberger came to Newton with an added bonus — MaryBeth.

“Back then,” Wilson said, “when our search committee found Robin, we all said, ‘what? his wife is also a PGA pro?'”

Since then, MaryBeth has taught beginners and old-timers of every age in both individual and group lessons at Newton, and she’s been the area’s most active golf pro in participating in state PGA programs to bring golf instruction into the public schools. Her “To the Tee” program introduces boys and girls to the golf course with an easy-going, fun-first approach that develops the kids’ excitement for the game as much as teaching them technique.

“She’s a great ambassador for Newton Country Club,” Wilson said. “There’s nothing better than seeing a bunch of kids taking lessons with MaryBeth. You know that with her entusiasm, she’s going to get at least some of them hooked on the game for life.”

But, enough with all the talk. It was time to get the party started, and, with 100 years of experience, the folks at Newton Country Club certainly know how to do that.

Carl Barbati is sports editor of the New Jersey Herald.