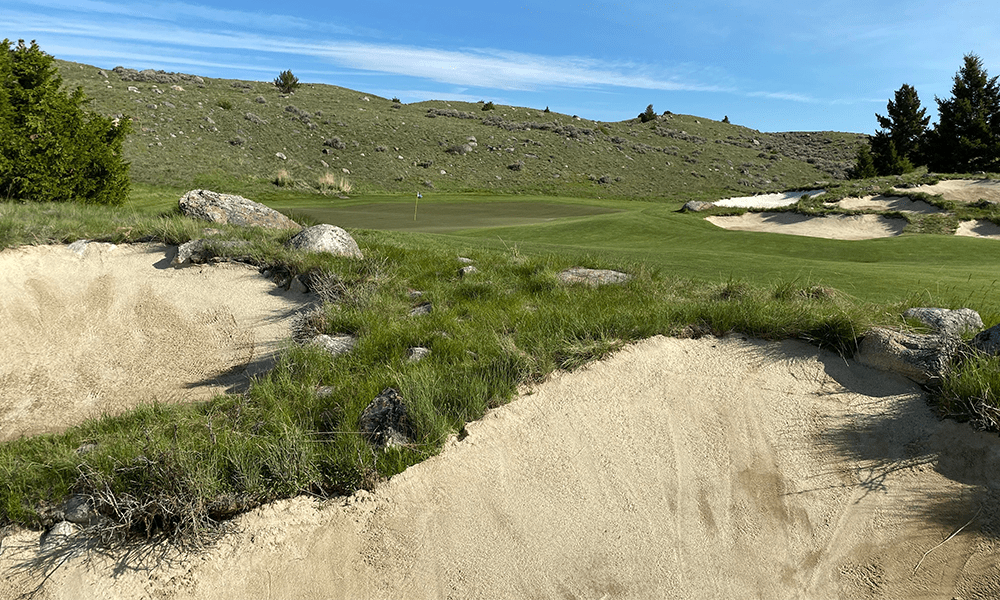 Elk getting into bunkers has resulted in damage to them at Rock Creek Cattle Company in Montana, designed by architect Tom Doak. But lining the bunkers with the Capillary Bunker system is set to solve the problem.

“When the course was built, the bunkers were lined with a textile product,” says course superintendent Rick Hathaway. “Given the location, some sort of liner was essential. The clue is in the name: the soil here is full of rocks, from pebbles to big granite boulders. With frost heaves in winter, the rocks move up through the profile, and would penetrate unlined bunkers very easily.”

But the textile liner could not cope with another problem caused by Rock Creek’s location – wildlife. “We have a large herd of resident elk, about a thousand strong. And they really like our bunkers!” says Hathaway. “Their natural position is head up, so if they are down in a bunker, they have grass at head height. So it makes eating less work for them. Especially in the fall, when they come back out of the mountains, the elk spend a disproportionate amount of time in the bunkers. And they are big, heavy animals. Their hooves inevitably cause damage to a fabric liner, and once there is a little hole, the sand gets through and the situation starts to deteriorate. It got to the point where we couldn’t manage the amount of damage that was happening. I was using six or seven guys two days a week working on liners.”

And elk are not the only wildlife that caused Hathaway sleepless nights. “We have a lot of ground squirrels here and they burrow up through the bunkers. Then the badgers – which want to eat the ground squirrels – dig down after them, and the next morning we have huge holes in our bunkers,” he explains. “A couple of years ago, I went to my greens committee chairman – a committee of one! – and he asked me what keeps me awake at night. I told him and said ‘Let’s start thinking about redoing one day’. The course is a masterpiece and the bunkers weren’t doing it any favors. From a distance, they looked pretty but from a playability point of view, they weren’t as good as the rest of the course. A couple of weeks later, he called me and said ‘It’s a go’.”

“I met the Capillary Bunkers rep and started having conversations with him, and I gave a couple of local superintendents a call. I went over to one that was doing a very large renovation of the course and went out for a day and watched them install the product. That gave me confidence in how it is installed and works. Last year, my greens chairman and I made the decision that Capillary Bunkers was the right choice. We did three test bunkers, evaluated different bunker sands, and made our decision.”

The project began in April, with construction being handled by contractor Ridgetop Golf, from Seattle, and the last bunkers were lined at the beginning of June. “We typically open the golf course on May 15, and April is the month I count on getting major course work done, so for the first six weeks of construction, there were no golfers around,” says Hathaway. “When we excavated the bunkers, I had the contractor scrape an inch or two out of the subgrade to make sure we didn’t change the depth.”

Hathaway is delighted with the results. “The bunkers are spectacular,” he says. “We have these jagged faces that have eroded in the thirteen years the course has been open, and that gives them even more character. There’s a little lip and the concrete fits in there. You’d never know there was concrete there.” Hopefully, the elk will concur!