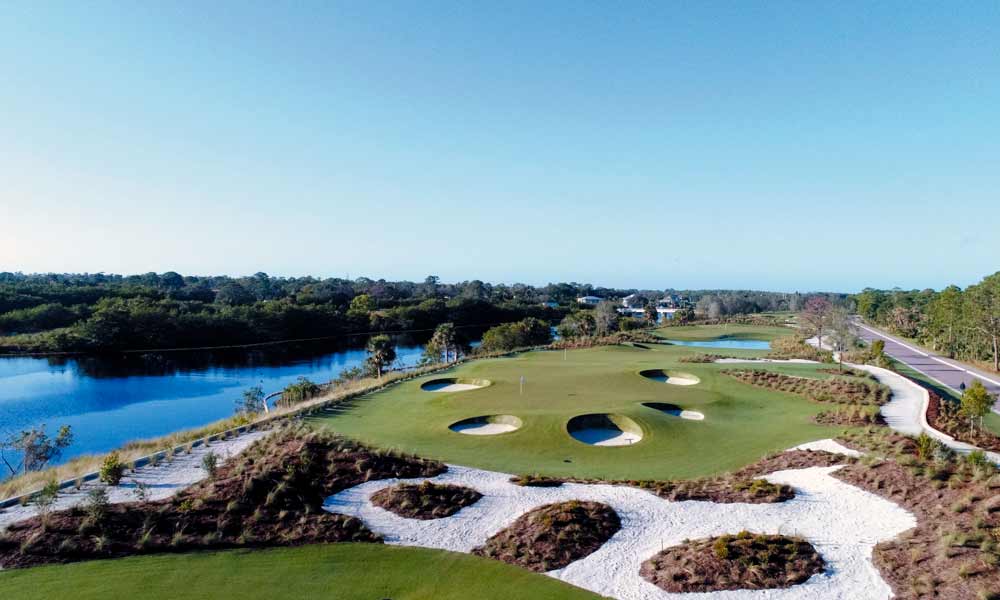 To understand the full picture of the restoration and refurbishments, you’ll want to read, “The Biltmore Golf Course Miami Returns to Its Roots.”

The season may be winding down at many golf facilities across the US, but in sunny Coral Gables, Florida, the Miami Biltmore Golf Course is gearing up for its busiest time of the year. Snowbirds, (those who live in northern climates and winter in the south) who have not played the course since last spring, will no doubt be surprised at the subtle but significant changes the Biltmore has undergone over the summer.

In a project led by golf course architect Brian Silva and executed by Chris Kleinsmith and Duininck Golf, the management at the Biltmore sought to restore the course by bringing back important elements of its 1925 Donald Ross design. In many cases, these “lost Donald Ross design elements” had not been intentionally changed; they had simply slipped away over time, transformed both by weather and by the countless rounds of golf played over the years on the Biltmore’s eighteen holes.

Bob Coman, PGA, Director of Golf Operations at the Biltmore, provided us with a hole-by-hole look at the renovations. In reflecting on the work done on the course, Bob observed, “I think Donald Ross would be pleased by what was done by Brian Silva and Duininck Golf to restore his original golf course design and playing characteristics. The golf course and practice facilities are now as good as any to be found anywhere.”

Overview of the Restoration at the Miami Biltmore Golf Course

Duininck Golf is Focused on Every Budget, Every Timeline and Every Situation

In addition to the contributions made by Brian Silva and Bob Coman, much of the credit for the successful restoration at the Biltmore goes to the hardworking team at Duininck Golf. Duininck is an organization with a rich heritage and a solid future that started in the construction business and has expanded into the golf industry.

Founded in Prinsburg, Minnesota, in 1926, by Henry, Amos and Wilbur Duininck, the company originally focused on the heavy civil construction business. Clearly the three Duininck brothers were thoughtful and forward-thinking businessmen. Even though they launched their business just as the American economy was slipping into the Great Depression of the 1930s, their road and highway construction company continued to grow. Over the years, the organization has branched out from its small-town Minnesota roots, becoming the diverse Duininck Companies that today include multiple industries and global locations.

In the 1980s, the Duininck Companies started Duininck Golf, despite the fact, that as Judd Duininck, Duininck Golf and GCBAA President Elect, explained, “No one in the Duininck family has the opportunity to enjoy the courses we serve nearly as much as we would like to; we are all too busy working. It’s a sunup to sundown job.”

Yet long days and hard work do not interfere with the deep bonds and strong comradery of the Duininck family. In a corporate structure that is atypical in contemporary business, Duininck Inc. is run collaboratively by thirteen partners, five of whom are second-generation descendants of the company’s three original founders and eight of whom, including Judd, are third generation descendants.

“We at Duininck Golf take great pride on renovating and restoring classic golf courses. Biltmore, being a Donald Ross original, has been an exciting project and has turned out great!” – Judd Duininck, Duininck Golf – GCBAA President Elect

“Everyone asks,” said Judd, “how do you guys all get along? How do you work together harmoniously? I tell them we get along because Duininck Golf is rooted deeply in our corporate values of servant leadership, stewardship, generosity, family and integrity.”

Devoted to and united by their Christian faith, the leadership at Duininck Golf strives both to operate and grow the family’s business as well as to live their personal lives by the same five values they use to guide their company.

“We live our values every day,” said Judd. “We incorporate them in our lives and in our work, and we pride ourselves on the quality of service we deliver. We demonstrate our commitment. The quality of our work and our dedication to quality project management is something we take great pride in.”

Over the years, Duininck has grown, expanding with the addition of their Southern Region Office in Roanoke, Texas. Along the way, they’ve been entrusted with renovation, irrigation or drainage projects at some of the world’s most legendary golf courses. Their portfolio of work includes Hazeltine National Golf Club where they did a bunker and other renovations before the 2016 Ryder Cup, along with projects at the Harmon Par-3 Course at the prestigious Floridan National, the Rees Jones designed Bayou Oaks at City Park in New Orleans and restoration work at Interlachen, a project that in many ways, parallels the work just completed at the Miami Biltmore.

“Many of the Biltmore’s existing fairway bunkers had been allowed to grow over with Bermuda grass and their restoration in 2007 largely involved replacing grass floors with sand. Additional restoration work has taken place over the past decade at Interlachen while a recently discovered original Ross plan guided the work at The Biltmore.”

As each of these two great golf courses have been guided on a path, returning to the roots of their original design, the courses have done more than honor the vision of Donald Ross or bring together Duininck Golf and architect Brian Silva as a proven team to envision and execute the work successfully. By enhancing playability and the golfers ‘on-course experience, the Biltmore and Interlachen have positioned themselves as courses that are optimistically looking ahead, confident in a golf industry that once again is trending upward, shining brighter and becoming stronger than it has been in many years.