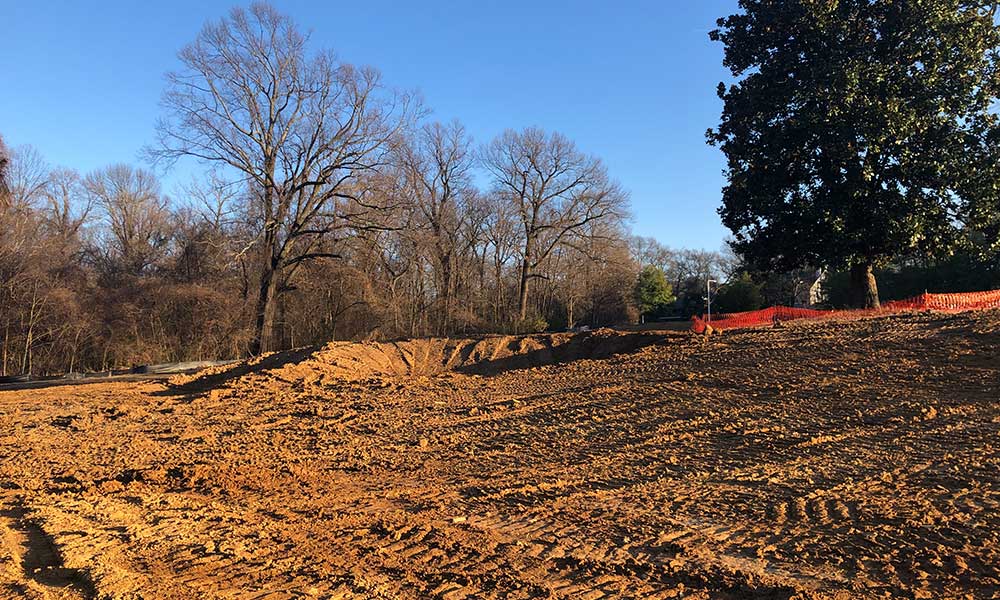 Overton Park 9 is a nine-hole, municipal golf course wrapped by some of the busiest streets in Midtown Memphis, Tennessee. The 340-plus-acre urban park complex, which includes trails, formal gardens, military memorials, playgrounds, a dog park, the Memphis Brooks Museum of Art, the Memphis Zoo, and both forest land and wide-open green spaces, is always abuzz with hikers, bird watchers, families at play and diversity of park enthusiasts.

But a century of use had left Overton Park 9 in need of a thoughtful golf course renovation. On first consideration, renovating nine compact golf holes might not appear to be such a difficult task, but the nonprofit conservancy funding and overseeing the course renovation knew that the project included its own special set of challenges.

The golf course architect tackling the renovation would have to be sensitive to the community’s deep emotional attachment to the facility. Generations of Memphis golfers had cut their teeth at Overton Park. Preserving the course’s spirit and integrity would be a matter the local golfing community would take personally. Additionally, the renovation would need to address the environmental concerns created when sections of a golf course wind through the protected acreage of the only old-growth forest in the southeastern United States that is located in an urban environment.

High visibility might also make the golf course renovation process more challenging. With the parklands surrounding the course remaining in use throughout the project, every tree removed and every mound of earth reshaped could instantly be subject to scrutiny and critique.

Finally, the biggest responsibility for the architectural team who would renovate this iconic Memphis golf course would focus on course playability. Overton Park 9 had once been home to one of the largest junior golf tournaments in the country, a tradition Memphis golfers long to bring back. Making the course playable for juniors, seniors and beginners while also keeping it interesting to skilled golfers seeking to be challenged would be a top priority.

Overton Park 9 plays only 2,250 total yards and occupies less than 25 acres of turf and 44 acres total. Nevertheless, this golf course renovation balancing act could only be entrusted to an architect who understood the nuances of the project and who would respect and preserve all that this nine-hole course represents to the city of Memphis.

OVERTON PARK GOLF COURSE, IN THE DNA OF MEMPHIS GOLFERS

Already familiar with projects done by King-Collins Golf Course Design, the investors behind the Overton Park 9 renovation chose the design-built team of Tad King and Rob Collins. Golf Course Trades first introduced its readership to Rob and Tad last September in the article, “Golf Course Superintendents: Embracing Change and Growing the Game.” The following month, The Trades published, “What if this Golf Course is the Epicenter of Change?” which was a deep-dive look into the renovation-turned-construction project at Sweetens Cove, the King-Collins golf course where Rob and Tad’s story began.

“This golf course is important to golfers and the game in Memphis. There are a lot of people in Memphis who are very passionate about the park, and we were really honored to be selected for this project.”

Within the Overton Park property are 126 acres designated as a State Natural Area. This protected acreage is known as the Old Forest. While scientists and environmentalists have yet to agree on a single definition of an “old forest,” they generally define it as a forest with large, old trees, and minimized human influence on the forest itself. For example, if a tree falls in a protected old forest unless it is a safety hazard, it is left where it falls, decaying naturally and becoming a nursery log on which seedlings may sprout, fungi may grow and wildlife may inhabit.

Overton Park Conservancy manages the Old Forest State Natural Area under the supervision of the Tennessee Department of Conservation (TDEC) Division of Natural Areas. Rob described the trees in the Old Forest as massive, adding that having the opportunity to renovate a golf course that routes through this forest was amazing and a responsibility King-Collins handled with great care.

IN THE HEART OF MIDTOWN AND THE HEARTS OF THE COMMUNITY

In addition to going through the Old Forest, Overton Park 9 crosses four park roads and three park bridges. When the King-Collins crew began work on the course in January 2021, the park remained open, with only the golf course closed to the public. Joggers, bikers, hikers, community members, parents pushing baby carriages, and all manner of park-goers had a front-row view of every step in the renovation.

No one, including the crew at King-Collins, City of Memphis employees, or members of the Overton Park Conservancy knew how the community would react. To get out ahead of potential concerns over tree removal or other changes to the course, Rob and Tad made it widely known that only unhealthy or overplanted trees would be removed and that course routing would remain the same as it had been since 1910, even though playing the course would feel dramatically different.

Interest in the project quickly turned into enthusiasm, and soon, friendly relationships developed. Park-goers chatted daily with the renovation crew, and at the end of workdays, curious children were invited for closer looks at the shaper’s construction equipment.

“Overton Park 9 is a compelling course,” said Rob. “Every hole is memorable. We developed our design, being sensitive to the types of greens we were building and wanting to strike a balance of interests with the contour, but still keeping things not too difficult.

“The course caters to a very, very wide variety of golfing skill levels and ages. We were careful not to make the course too severe around the greens. But we also wanted enough interest that people had to play some fun and interesting shots.

“Now there are nine really distinctive, really interesting and really fun, playable greens that all accommodate the low running shot, allow you to play away from certain hole locations, and use contours to bring the ball around towards the hole. I’m really excited about what we did there, and I’m excited to see people experiment around those greens and try to hit a lot of different shots. We even had the opportunity to construct a children’s putting green where adults have to be invited by and accompanied by a child in order to putt on it.

“We were able to establish a balance, adding enough spice to create some fun memories and opportunities to hit interesting shots. We were able to design into the land and honor both the game and the needs of the golfers who play there.”

Overton Park 9 is projected to reopen in June 2022 upon completion of clubhouse renovations and the construction of a new maintenance facility. Find out more at https://overtonpark.org/golf/.

Linda Parker has been writing professionally since the 1980s. With clients in finance, sports, technology, resorts, and nonprofit global initiatives, Linda helps organizations communicate their stories in meaningful ways to the people they most want to reach. She has authored, ghostwritten, or contributed to more than a dozen nonfiction books. Linda is a member of the Authors Guild and the Golf Writers Association of America. You can connect with her at inda@glindacreative.com